“Well… that didn’t go as planned.”

I’ve uttered those words before regarding a hike, but I’ve never had that feeling about an entire YEAR! I had big plans for 2020, but by late February I was in a weird state of “wait-and-see” only to watch a series of surreal events play out and keep me from most of my itinerary for the year. I know it’s been a difficult year for many and much of the turmoil is beyond the scope of this blog, but… despite the craziness, I’m glad it wasn’t entirely a lost year here. Though it was the first time in 19 years that I didn’t spend at least one night under the stars in Utah, there were some good things that happened in 2020 from an Across Utah perspective:

New Camera — early in the year I got the Insta360 ONE R as a much needed upgrade. I’ve been using 360-degree footage in my videos for many years now to create more dynamic shots giving the illusion of a camera person hiking along with me. This camera lets me do that with higher quality and provides much-needed stabilization for those handheld shots I like to do. The camera’s 4K “mod” also captures more traditional content w/o me pulling out an entirely different camera.  Though I got to use the camera on a few shorter hikes this year, I was really looking forward to having it on a longer trip in Utah.  But… if there is a silver lining, it’s that this camera like many tools has a learning curve and I worked my way through some flubs and frustrations on the shorter trips and should be ready to maximize its potential on future big hikes! Some unique shots with the new addition: 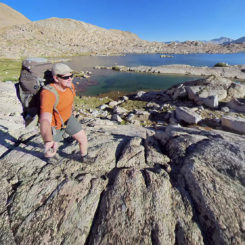 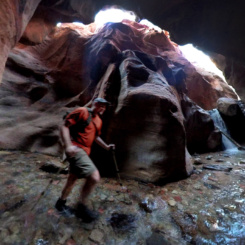 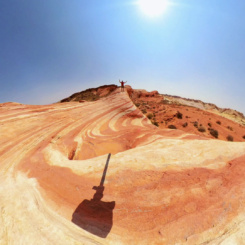 Lake South America and The Upper Kern — by late June I was going pretty stir crazy and thus planned a semi-impromptu trip to the Sierras for July. It’s a place that I really like, but don’t backpack there much despite many trailheads being located less than a tank of gas away from my front door! This 9-day hike kicked my butt in many ways, but it was still a great escape from everything else that was going on. On the hike I finally got to remote Lake South America. It had been on my list for a long time so it felt like a worthy accomplishment (even if it’s far from the most scenic lake in the region.) 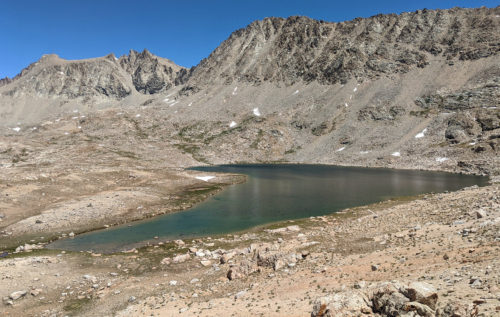 Kanarraville Hike — another place which had been on my list for a LONG time that I’d never visited was Kanarraville Falls. In August I finally got to change that and enjoyed this short water hike and managed to avoid the crowds by doing it mid-week and late in the day on a HOT summer afternoon.

The Fire Wave — and yet ANOTHER place that I’d driven by many times but had never visited was the Fire Wave in the Valley of Fire State Park, Nevada. It was August and crazy hot the day I made the short hike out to the colorful sandstone feature, but that helped me have the place to myself — evidently a rare occurrence at this increasingly-popular destination. 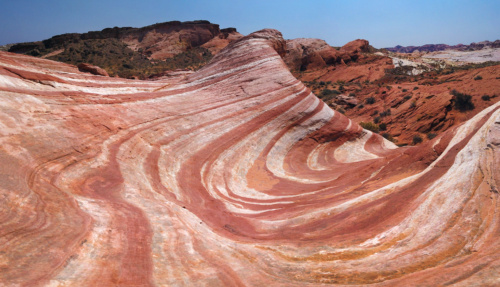 While I didn’t get outdoors nearly as much as I wanted to in 2020, I did try to make the most of my time sitting in front of the computer by adding content to this site. I finally revisited my 2018 Zion to Arches Trip Report and added all the daily journal details and sectional galleries (40 pages of written description plus over 700 photos!) 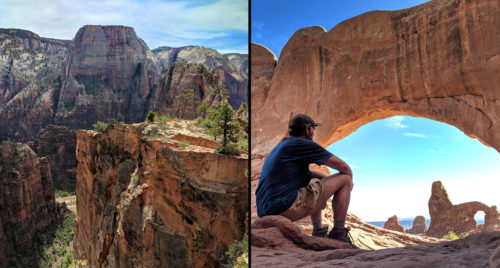 I also published a “new” video from my very first trip to Coyote Gulch in 2005.  I tried to make the best out of my original low-quality edit and also added some high-res scans. It was fun for me to re-visit this time capsule of sorts.

Later in the summer I cobbled together my own version the Great Gallery. This feature dynamically creates a collage of 100 pics each time the page loads. Most of the images include links to the associated trip reports. IMHO it’s a fun way to browse some cool shots and explore the site. Give it a spin if you haven’t already. 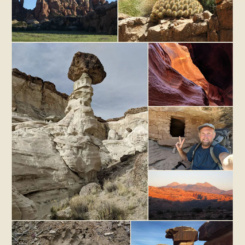 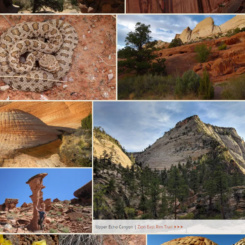 I also dedicated some more time into my ever-evolving Master Map. I added several new alternate route options plus dynamic points of interest based on the user’s map zoom level. Nearly everything is clickable with links to added photos/detail from my site. I want to extend my thanks to the users who emailed me with various notes/corrections — especially Murray from Canada who by far found more “bugs” than anyone (including myself!) 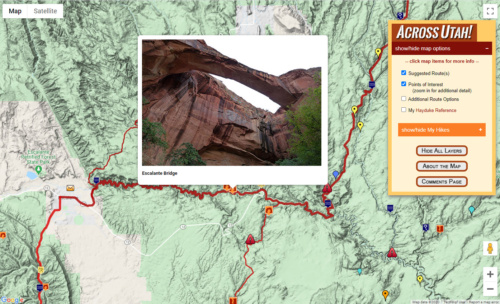 My Hayduke Reference also got several updates over the course of the year. I realize this subset of my site may not appeal to everyone, but many “Haydukers” seem to be finding it useful. If you are interested in long-distance hiking on the Hayduke or any of the great alternates check it out:

.
I also quietly added a “Buy Me a Beer” section to this site. This virtual “tip jar” isn’t going to pay the bills, but it helps offset some of the fees associated with running the site. I’ve been humbled by the generosity of my audience and I’ve enjoyed connecting with several followers through this network.

.
Speaking of connecting with others… I definitely did more of that this year and it was great. Though this doesn’t really show up front/center on my site, I try to respond to any and all comments here and on my YouTube Channel as well as answer all private emails. I might not be the speediest with my replies, but I eventually get there and really enjoy chatting about the minutia of Utah hiking. It’s been a pleasure corresponding with so many virtual strangers from around the world who share this passion. So… always feel free to write if you are curious about anything on this site and/or looking for recommendations. Email info located in the top banner. 👍

So that was 2020 according to Across Utah. In hindsight it doesn’t look like a bad year, but of course I wanted to do more and curated lists like this never tell the full story.

Onwards and upwards for 2021! I have some cool stuff in the planning stages that I truly hope comes to fruition and that I’ll be able to share with everyone throughout next year. Until then…

HAPPY NEW YEAR and as always… Thanks for Following Along!