Rainbow Ridge is not the real name. I don’t know if there is one for this spot; Abbey would like it better that way, right? But, I do know this is a really cool place and that I am actually feeling semi-guilty about posting about it. For that reason, I’m not going to refer to this spot by any specific nearby place names for now. Write me at Jamal@AcrossUtah.com for more information if desired.

Jump to the gallery.

I set out to get to this little spec of color high up in the hills of southern Utah that I’d had my eye on for a while. I hadn’t seen any pics from this specific area, so I didn’t have my hopes too high. Besides getting to the spot, my goal was to devise some backpacking routes through the area so I hiked in a few miles and set up a base camp. The next day, priority #1 was to get to the spot.

Following my topo I got to the valley below the ridge. Unfortunately I discovered that there was no way up, but I could see the colorful bands above: 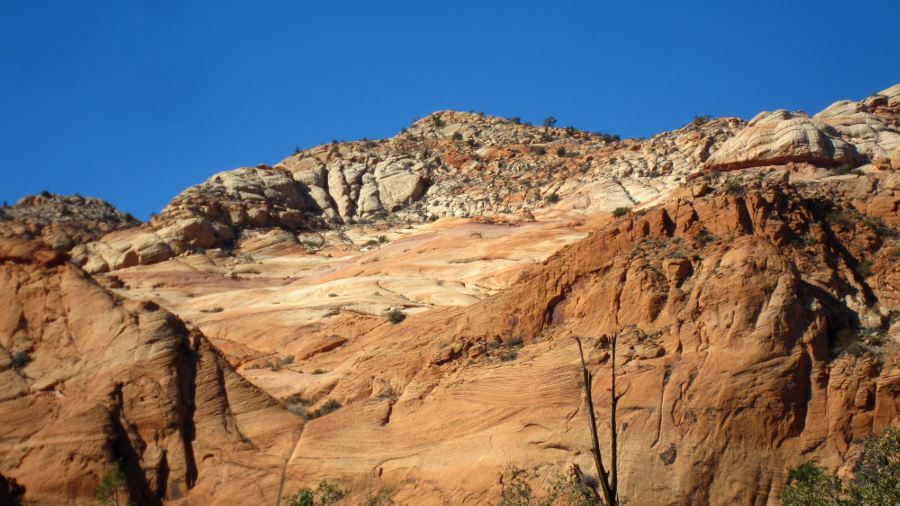 I worked my way up the closest place I could, but the path of least resistance continued to take me farther and farther away from the ridge. Soon the only way higher was a semi-sketchy route up some scree. There was no way this was big pack friendly! Across the way I could see where I wanted to go. Though farther away, I was closer to the same elevation now: 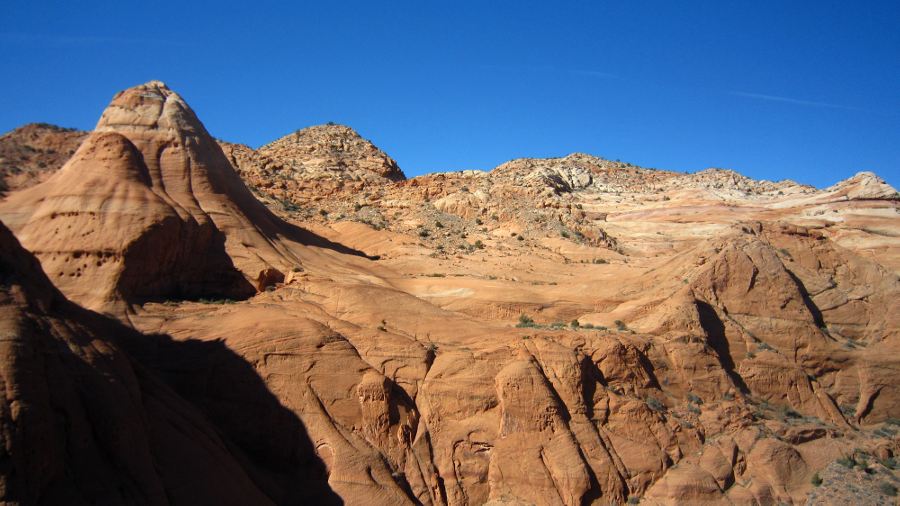 My sketchy route led to a summit which had an equally sketchy route down the far side. At this point I wasn’t sure the route would even connect and I debated giving up. But… the spot called so I pushed on. Here’s looking back at the summit and the descent route: 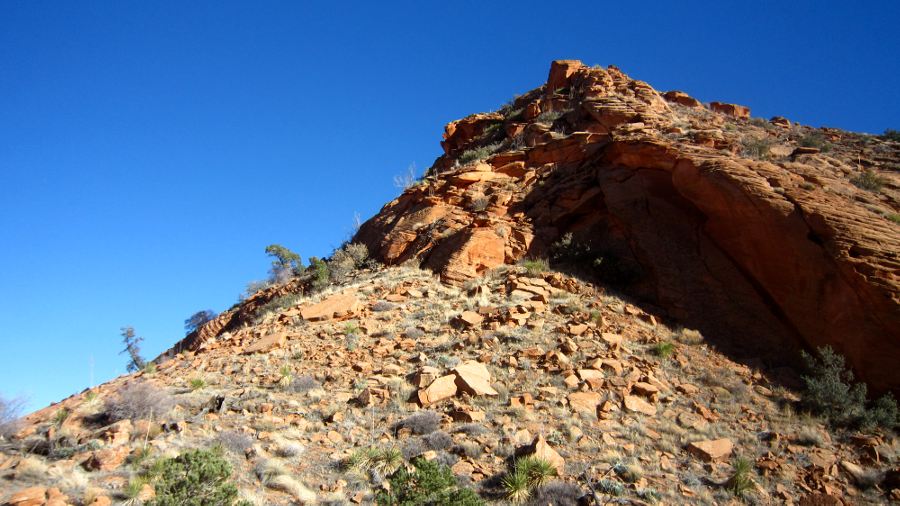 Once I got to the slickrock it too was intimidating, but doable. It was also a pretty cool site in its own right:

Another 10 minutes of up and downs and around a bend and I was within clear view of the ridge and it was all I hoped for:

I quickly made my way closer to the checkerboard-type sandstone cross-bedded with swirls of yellow, orange and white; a huge purple stripe running below it all and another section with a big red dot on a field of white a la Japan’s flag. The sun was already low in the February sky so I ran around giddy taking pictures before the great light was gone.

My favorite feature seen here made me think of the turtle shells from Mario Bros.:

Many colorful patterns were all around. This one reminded me of a butterfly and I hate that I didn’t get a better shot of it: 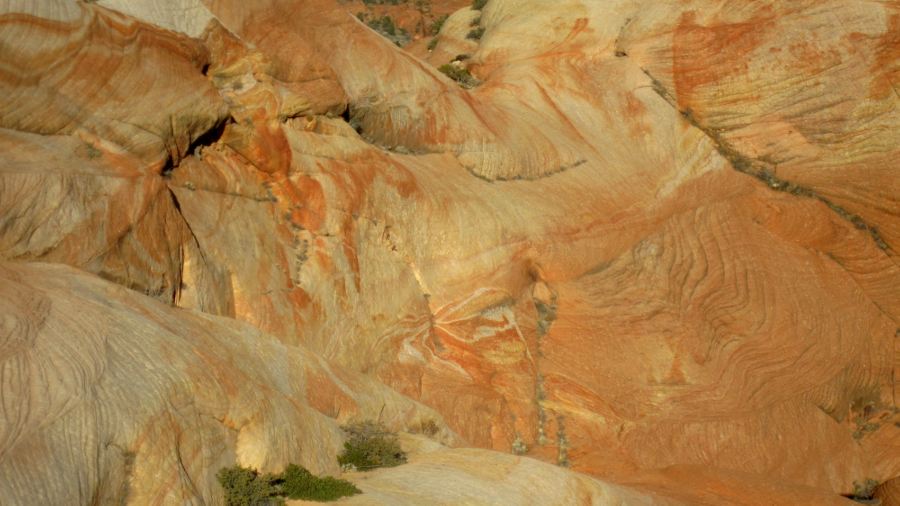 Great grooves were a common feature:

Mr. Shadow was there: 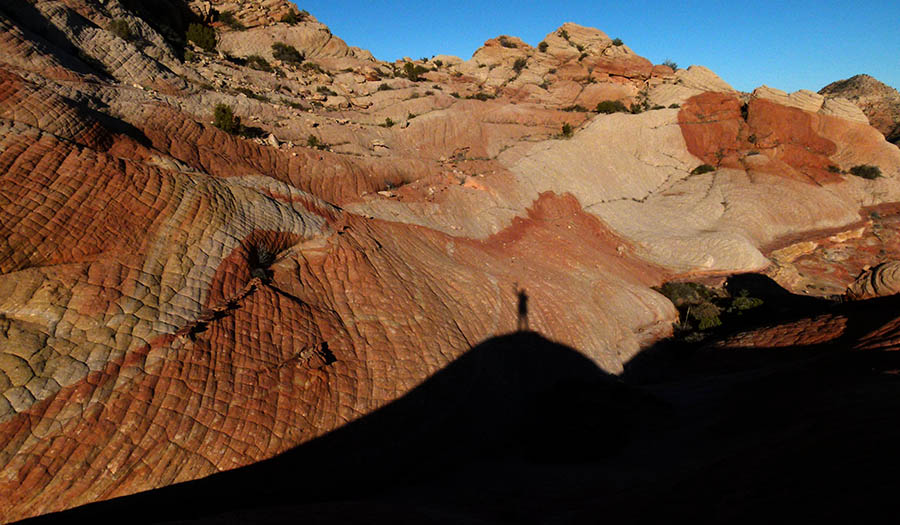 I wanted to stay longer, but I knew I still had a long way to get back to camp. I had hoped I might be able to find a different way down from the ridge but had no such luck — every route fell away via incredibly steep slabs. Now with the sun going down I decided to retrace my steps back along the sketchy route. I got through the bad section before dark, but still had a long hike with the headlamp back to camp.

The next day I headed out the other direction and found another route to the top far from Rainbow Ridge, but closer to another known, though seldom visited, scenic area. My route up was still incredibly steep, but not as bad as the day before and the rocks far more stable. This route was feasible for a sure-footed backpacker. Here’s looking down from the top: 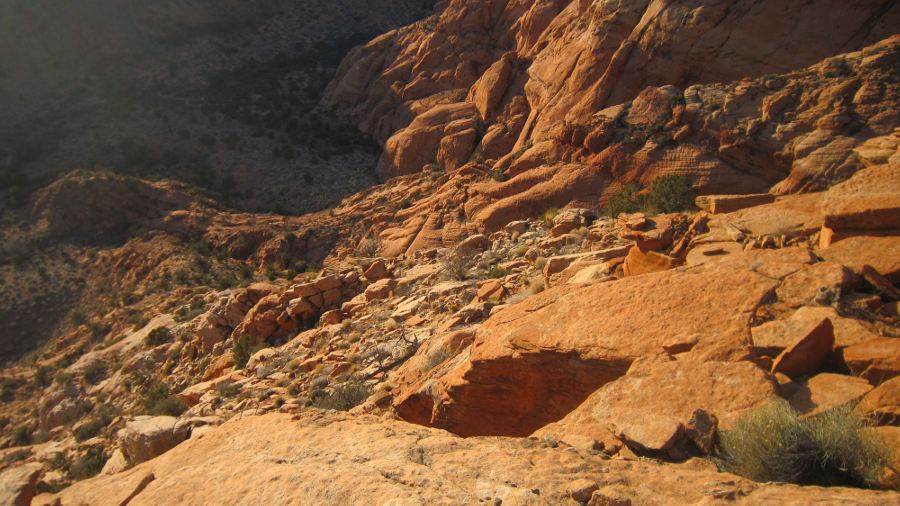 Once on top it was another slickrock paradise (pics in gallery), but I was anxious to see if I could get back to the ridge from the day before so I set off cross country. Unfortunately the drainages didn’t connect like I thought. After climbing out of another valley and doing some ridge walking, I found the correct ridge and carefully made my way down in. This too was probably still too steep for a pack. Looking down in: 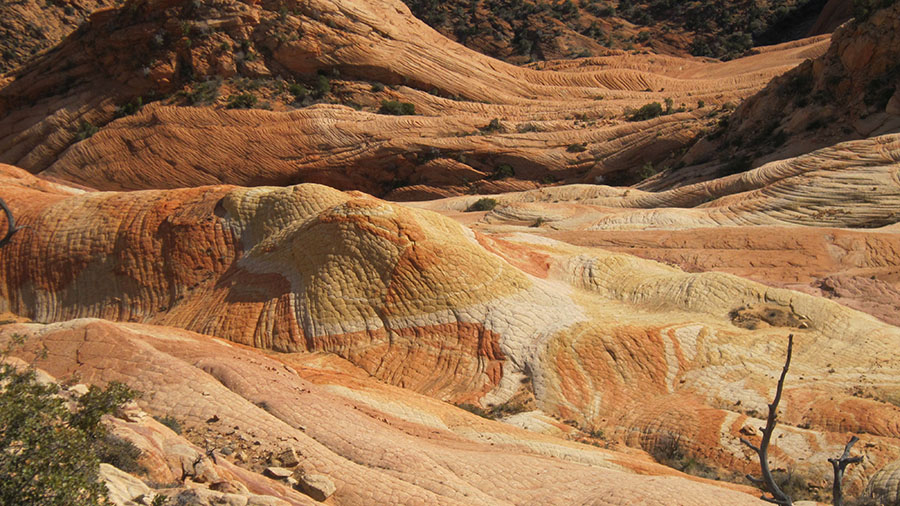 Now it all made sense – this place isn’t popular because of such limited access. It’s a hanging valley in a sense – perfect for staying isolated. Once again it was late the day so the sun was good and today there were clouds – I was excited. 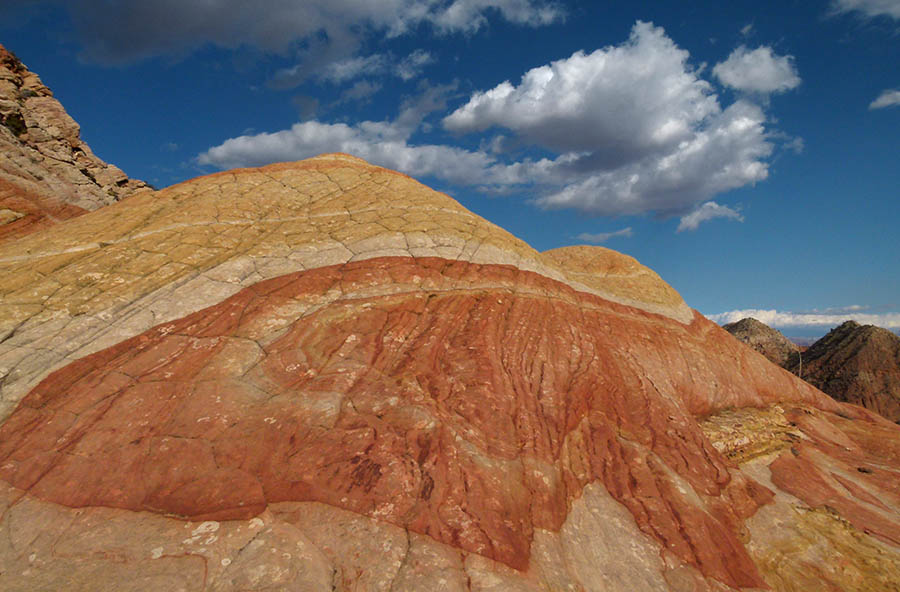 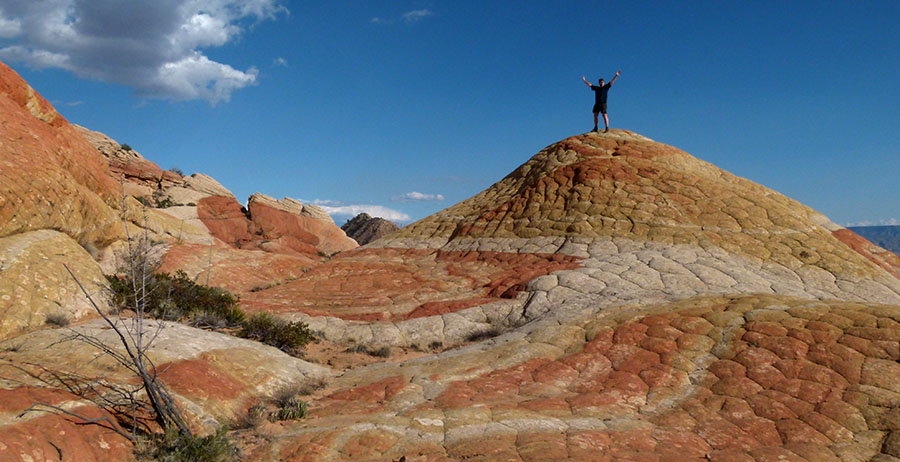 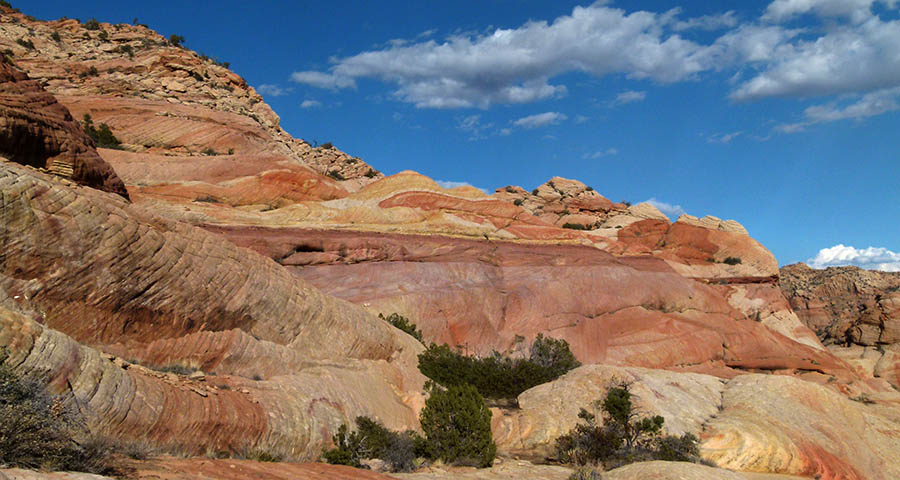 Knowing I had to get moving, I contemplated which of the two ways I wanted to return. But first I decided to explore a drainage that I had neglected the day before as it looked blocked and regardless didn’t head the direction I wanted. Once I went just a little ways I realized – it wasn’t blocked at all. And there were footprints, lots of footprints. Well darn… Rainbow Ridge is NOT a hanging valley after all; THIS is the easy way to the ridge and many others have been here before (of course).

AND… after writing most of this report and then doing a little more scouring of the Internet I realized that there are other pictures of this place. It’s just I didn’t recognize it because those pics were captured on an overcast day. With muted sandstone and void a blue sky there was definitely no rainbow of colors on the ridge that day. As with many scenic spots, the time of day and weather conditions make all the difference and I guess I got really lucky two days in a row!

In fact… the more I think about it, this place isn’t that special at all… nobody should visit it… ever. 🙂

See the gallery for additional photos of the ridge as well as the other slickrock area not too far away.