For my last bit of spring “exploration” in southern Utah, I wanted to do an extended loop hike setting out from the Hwy 12 bridge over the Escalante River. When I hiked across Utah in 2009, a “monsoon-like” storm made me ditch my plans of going down the Escalante and up Boulder Creek to the Upper Gulch. I ended up walking along Hwy 12 to the Burr Trail to avoid the swollen rivers. So… I wanted to return and check out the route. 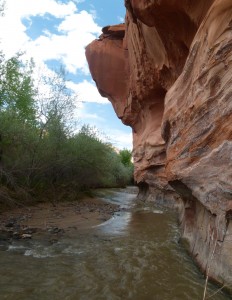 I set out from the bridge following the designated route across the private land. The river was running high, but still clear and nowhere near the torrent from two years prior. In no time at all I passed Phipps Canyon and continued on down the Escalante where I soon came to the “spider cave”. This spider-infested alcove was where I camped out in the rain in 2009 before deciding I needed to turn around and head back to Hwy 12. So… from this point on it was all new to me.

A little bit farther down I got to where I would leave the Escalante and go up Boulder Creek. It’s a good thing that I wasn’t daydreaming, because this tributary would have been VERY easy to miss. Even though Boulder’s Creek’s flow was about equal to the Escalante — it comes in on a bend far from where the trail along the Escalante rounds the corner. But… I thought I was close so I tracked it down, crossed the river and headed up Boulder Creek. 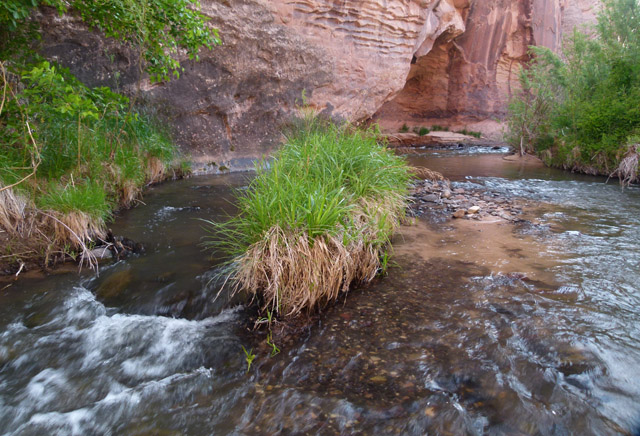 I was warned that going up Boulder Creek might be very difficult during spring run-off. I was also advised the narrows might be impassable. Knowing I could turn around if needed, I pressed on. Going up the knee-deep creek against the current was definitely a lot of work — but it was definitely doable. Only one set of rapids gave me pause. I camped near an alcove south of the narrows. Exploration of the alcove yielded signs of inhabitation likely by the archaic tribes a long time ago. 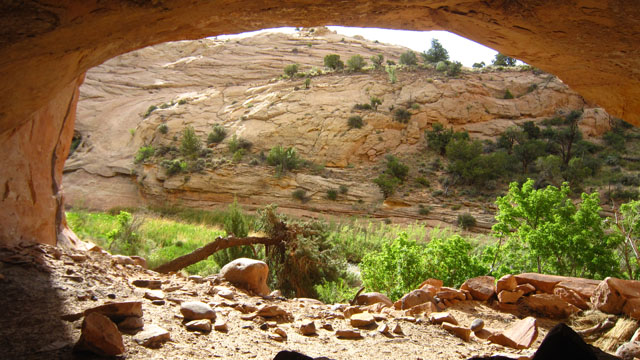 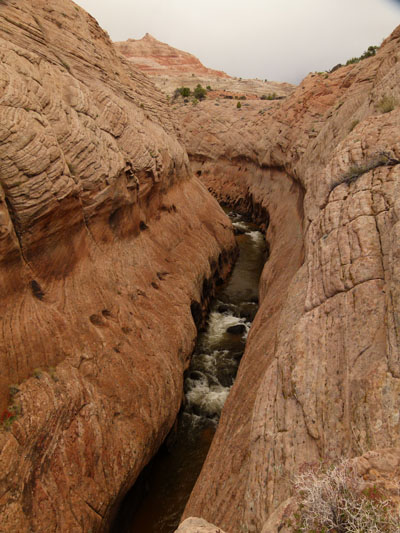 When the storm seemed to dissipate, I decided to drop my big pack and go back to the top of the narrows and attempt a loop down through. Making a somewhat steep trek back down to Boulder Creek, I got in and headed downstream as the walls closed in.

The first set of rapids was a scary sight and the sound reverberating against the walls was deafening. But… once I got in, I realized that the current, though strong, wasn’t dangerous. Now just carrying a water bottle and a dry bag, it wasn’t too difficult to get through. It was a fun route — even though two different spots were swimmers. At the bottom I exited and closed my loop back to the slickrock to the east. 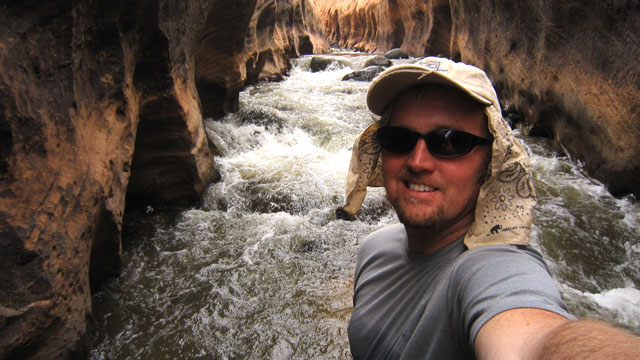 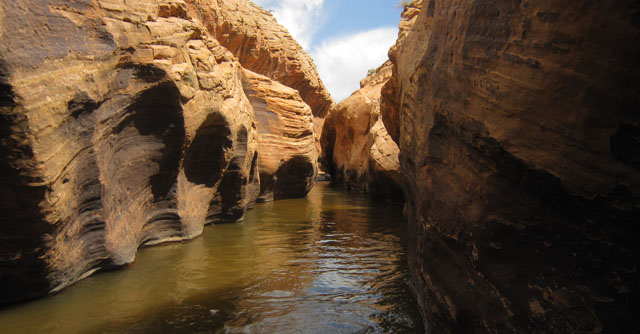 Continuing up the slickrock bowl I passed several huge tanks of water. This area was really quite scenic, with a lot of colorful “wave-like” sandstone formations. Once up on the saddle, the great views extended over into the Gulch and in the distance to the Henry Mountains.

Down into the side drainage of The Gulch, I dropped the big pack again and set off on another side hike. Though I planned on going down The Gulch, I wanted to go UP first, to connect the route with my hike from a few days prior in the Upper Gulch. Before long at all I was at the Gulch with its moderate amount of flowing water. I was surprised to see the place pretty mucked up by cows. I headed north and before too long ran into a group of the aforementioned beasts! In an attempt to not drive them up the canyon, I got up on the west rim of the canyon and tried to get past them. This was easier planned, than done. After a mile or so of rim-walking, I finally got past them and slipped back down into the canyon near an old rancher’s cabin. I explored two large alcoves in the area and once again found evidence of past inhabitants (shards, broken tips, corn, etc.) 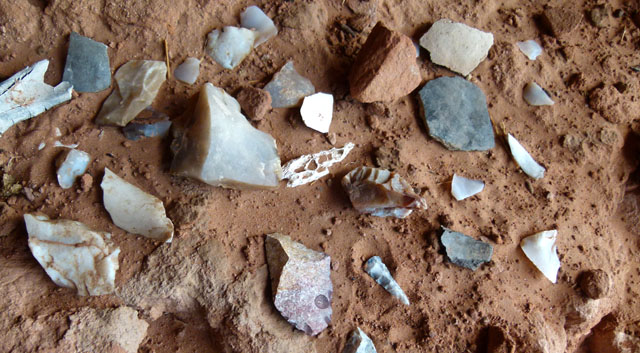 Back in the canyon now I continued to head north up the stinky cow-infested canyon. In another hour or so I was back at the Burr Trail and thus connecting my previous route. I looked around for the cliff dwelling near the road here, but didn’t have any luck finding it.

I decided I didn’t want to go back down the stinky gulch, and instead wanted to walk the western rim and the ridge separating the Gulch from Sand Hollow. Imposing cliffs made getting up on top difficult. I tried to go up the side drainage near the road, but the top of it cliffed out. There was a log climb that looked doable, but I didn’t want to try it solo. Instead I looped back, always trying to get higher and higher with each ledge. I finally worked my way to the top directly south of the big bend in the road near the Gulch TH. Once up on top the views were amazing the whole way down. THIS is definitely the best route through the area.

basalt bombs along the high route 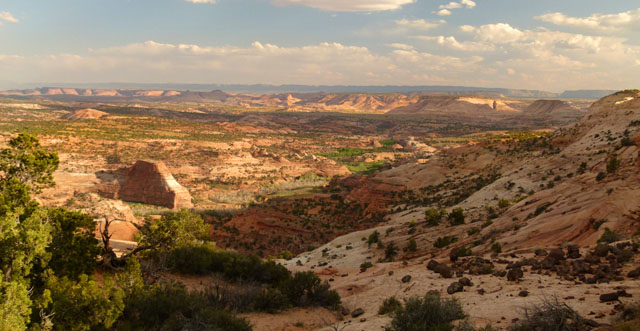 I got back to my pack late in the day and since I didn’t find any water in Sand Canyon, I headed back to The Gulch to camp. Stinky… but at least I had water. 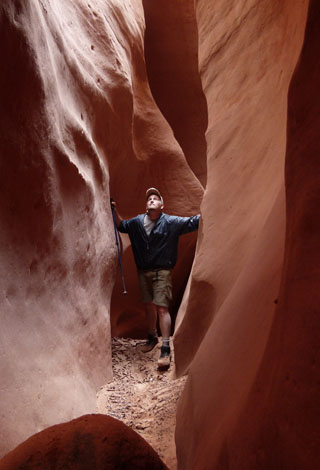 The next morning I continued down The Gulch. I passed a few more alcoves and then before long I got to the junction of a side drainage entering from the northeast which Kelsey mentions as having some good slots. I headed up.

The side canyons soon enters into a shallow slot. This is followed by a deeper slot which is better. Then, after a short open area, you enter the deepest and best slot yet. This one you can’t get all the way up it and the bypass route definitely took a little bit of work.

Once back down into the canyon it somewhat slots up again, but this section is fairly shallow. I never saw the arch Kelsey mentions, but I see did the natural bridge… it’s pretty puny.

Back down in the main canyon I continued south. When I arrived at another old rancher’s camp, I headed up the western hills to bypass the narrows farther down. This route wasn’t marked at all — but it was pretty easy to find the path of least resistance. Again — the views up high were great and you could see the slot taking shape ahead. The route back down into the canyon wasn’t marked either and was found with a little trial and error. It looks like there might be two routes back down in, both fairly steep. 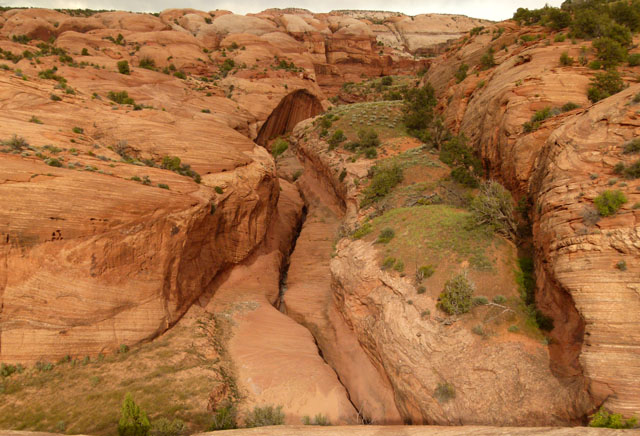 Once down in, I went back upstream to check out the slot. Again the water rushing through the tight canyon made it seem much more ominous than it really was.

When I finally got to the end there was a nice little waterfall. It’s hard to believe that such a small obstacle (about 7′ tall) necessitates such a long bypass! If I was coming down with a group I think I would definitely look into a rope-based solution. 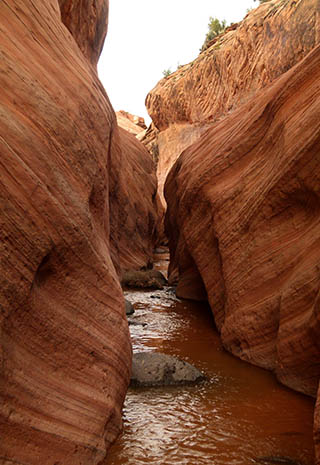 From this point on down the canyon was great. The canyon became more entrenched and of course, there were NO cows! I camped in a big alcove a mile or so up from the Escalante. 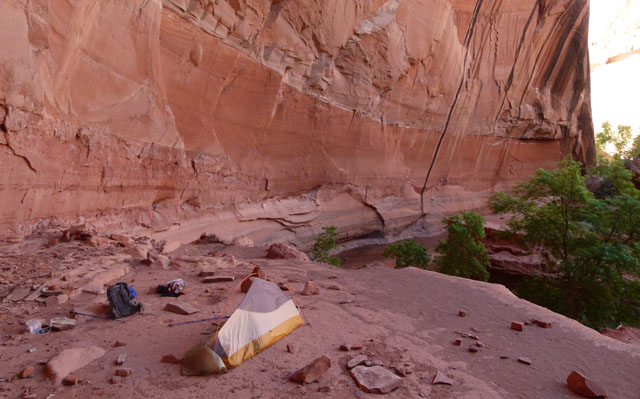