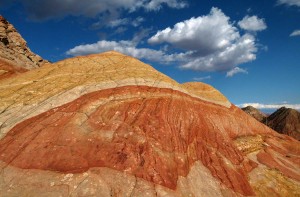 Nearly nine months after my initial visit to “Rainbow Ridge“, I got a chance to return. If you haven’t read the original report, just let me re-state that “Rainbow Ridge” is not the real name and I prefer to not use any real names to keep this post from being indexed by Google. But again — I am willing to share more info offline so write me at Jamal at AcrossUtah dot com if you are curious for details.

That said — the general location was never a secret and is less so as each month goes by. Before going in February there were only a few sites online talking about the general location. Now there are dozens, including a few with detailed maps. I thought about not adding to the momentum by holding back on this report. BUT, if I can share the giddiness that I feel when out among the colorful sandstone — then it’s worth it. I just hope I get my fill before this spot becomes really popular. It’s also interesting that despite the rise in popularity of the general area, “Rainbow Ridge” remains relatively obscure. I hope it stays this way (though I doubt it will.)

Side note: another reason I refuse to use the common name associated with this general location is that it’s just flat-out wrong. That “YF” designation refers to the boring area nearby and these colorful cliffs deserve better. It would be like referring to the Grand Canyon as the Kaibab Plateau. I can’t do it. Anyway…

On my last visit I climbed UP the steep cliffs to the slickrock. There are only a few routes for doing this and those that work still require a bit of adventure. This time out I took the more-common route in from the dirt road to the north. It’s much less adventure, but still a bit of a slog on top of the much longer drive (btw — driving in from the NE is longer in distance, but a much easier road to travel than the W.) Arriving at the unofficial TH I was semi shocked to find 4 other cars already there. Ug. That said… I was amazed that after I passed two groups walking in, from that point on I didn’t see them or anybody else the entire time I was wandering around the “goodies”. This is probably because I made a beeline to the more obscure areas and waited to visit the popular area late in the day. First and foremost on the agenda was… Rainbow Ridge: 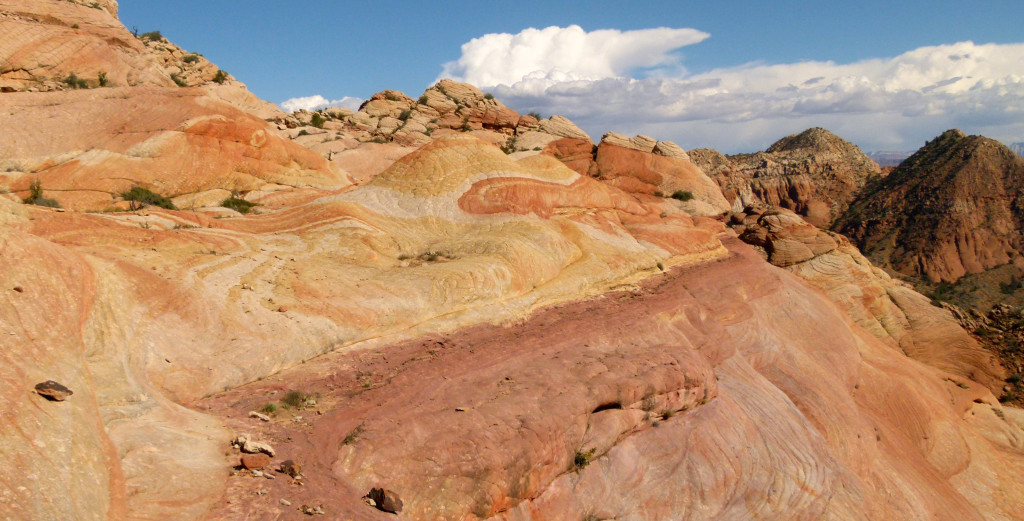 Like my previous visit, the weather was great; sunny with blue skies. Once again I was amazed by the beautiful colors. I sat atop what I call the Turtle Shell and had a snack while soaking it all in. 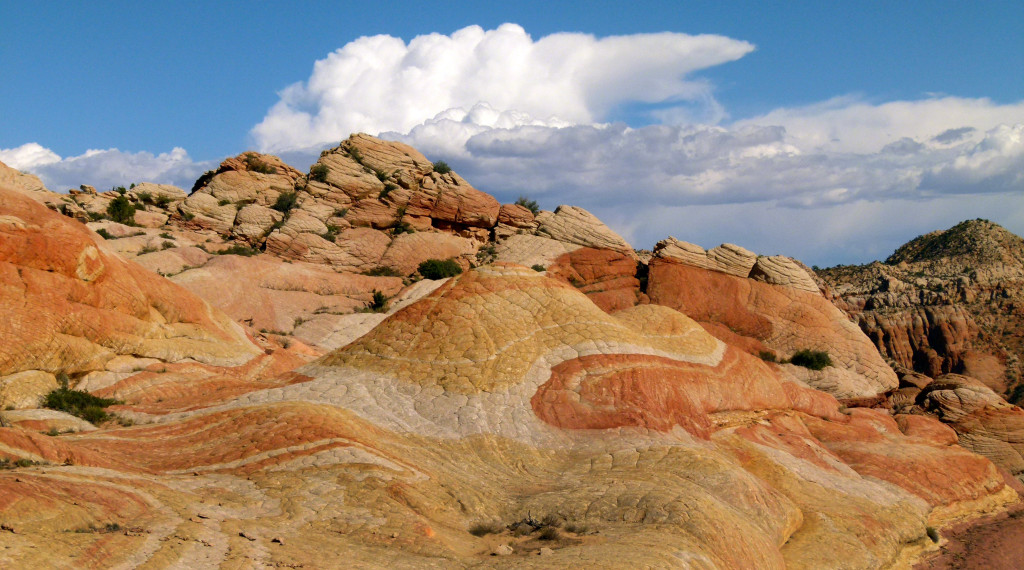 Looking down to what I call the Flag of Japan: 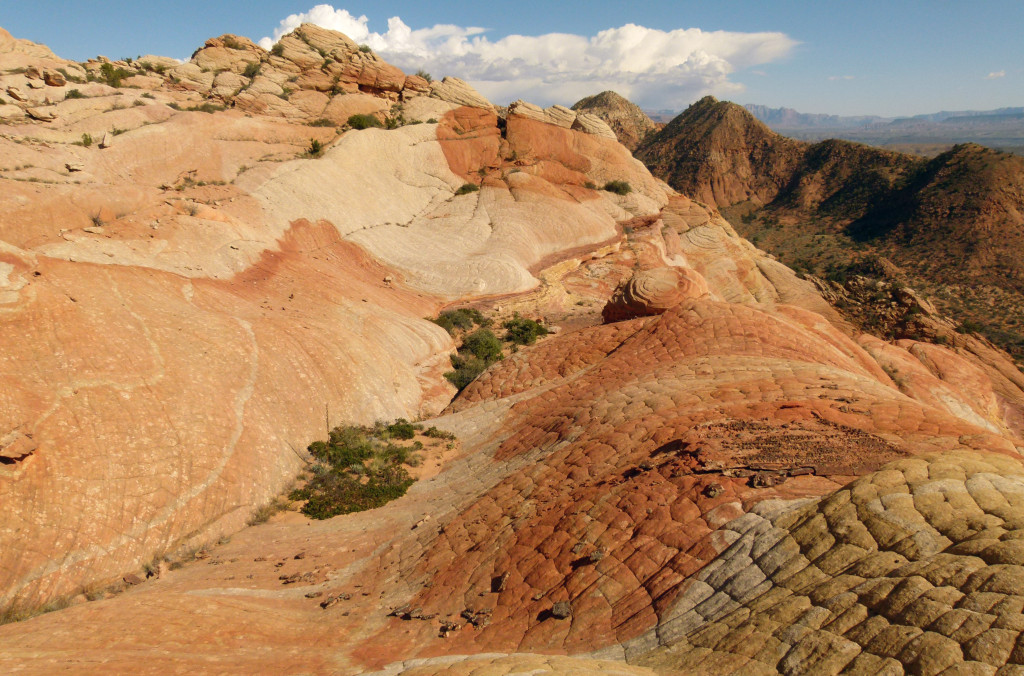 In the crack in the red dot is access to a very steep descent route I wanted to explore. I’ve talked to another group who connected this area to the the valley below. I was turned away last time by two different steep sections I found too intimidating. This time I checked this crack route as well as one other nearby. Both of the new routes seemed more feasible, but again I backed away as I had on slick shoes and going solo seemed just a bit too risky: 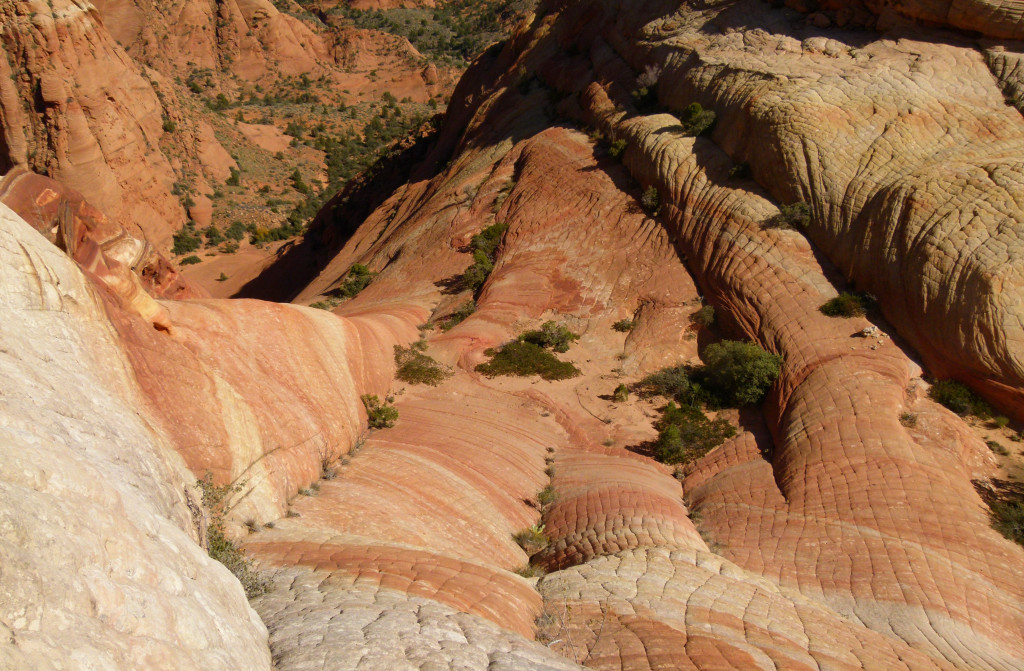 Finally I had to move on away from Rainbow Ridge. So, I headed to the “main” area that I call Valley #1. This is the area that gets most of the attention: 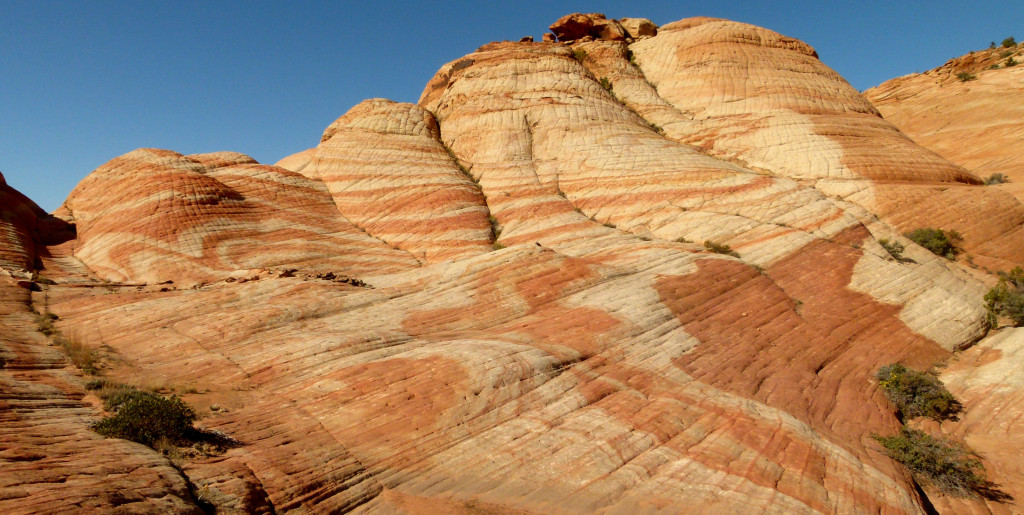 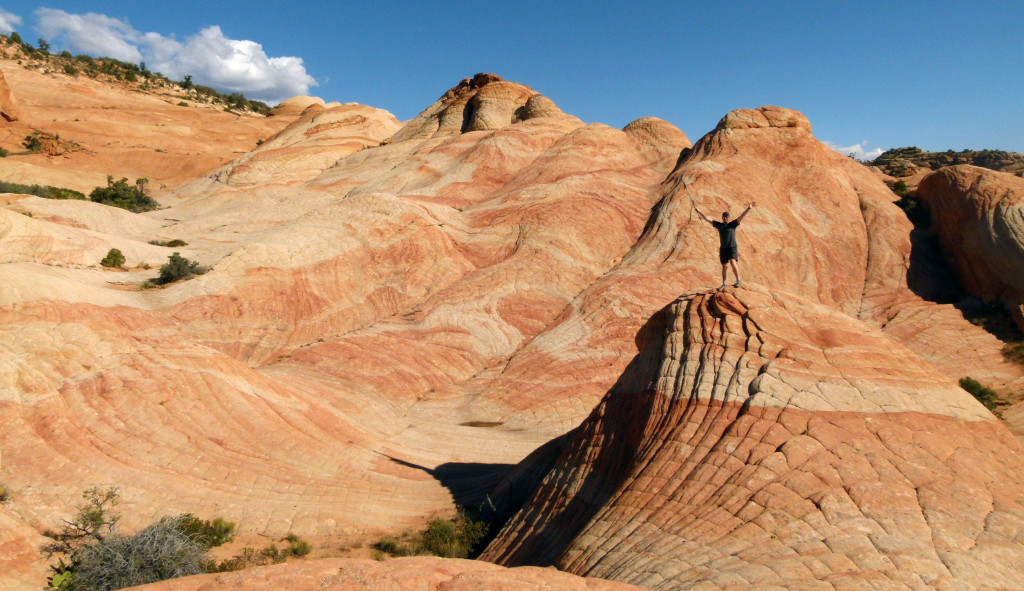 I spent some time shooting the various knolls in the now late-afternoon sun. I didn’t linger too long though as I wanted to explore a few other side valleys on the way back to the road. I skipped Valley #2 as I had walked its entire length last time. It’s not quite as impressive as Valley #1, but still a very colorful area with a lot of great photogenic slickrock. Here’s just a peek from the top:

Farther north, Valley #3 looked very promising via SAT imagery, but in reality the colors were very pale compared to other areas nearby and in general the area is more overgrown: 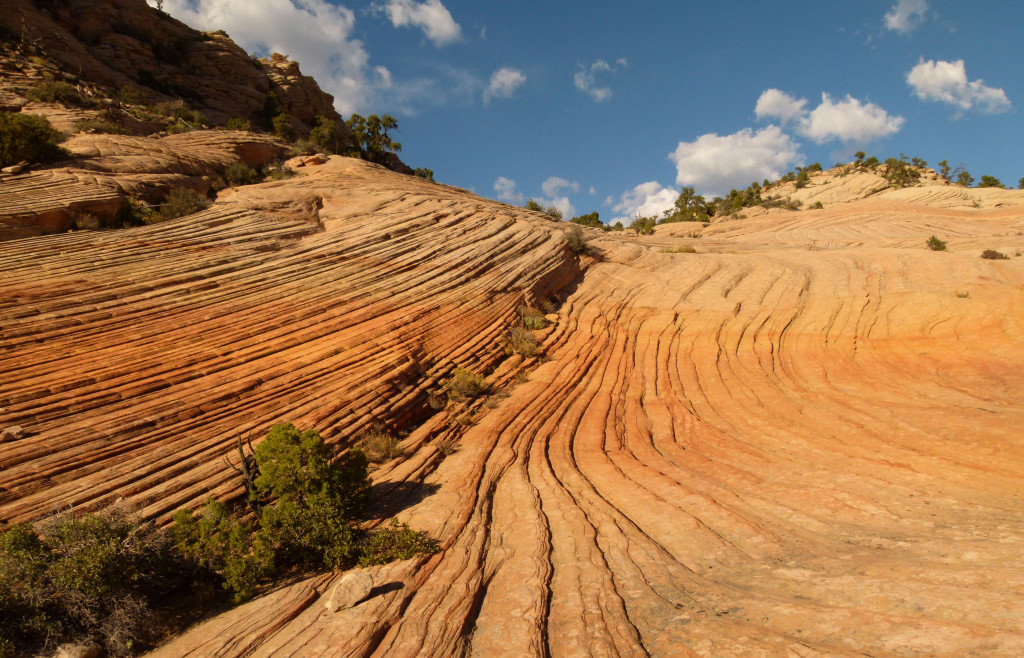 There might be some goodies hiding in the undulating hills, but I didn’t find them and gave up growing impatient wanting to continue to one more valley.

Working my way along the rim NW I finally arrived at Valley #4. This one is definitely majestic — but again it seems to pale in comparison to the the first two valleys. As incredible as it is from afar, it didn’t seem that friendly for exploration nor to include any great “micro” features. With the sun getting low in the sky, I decided to save deeper exploration for another day: 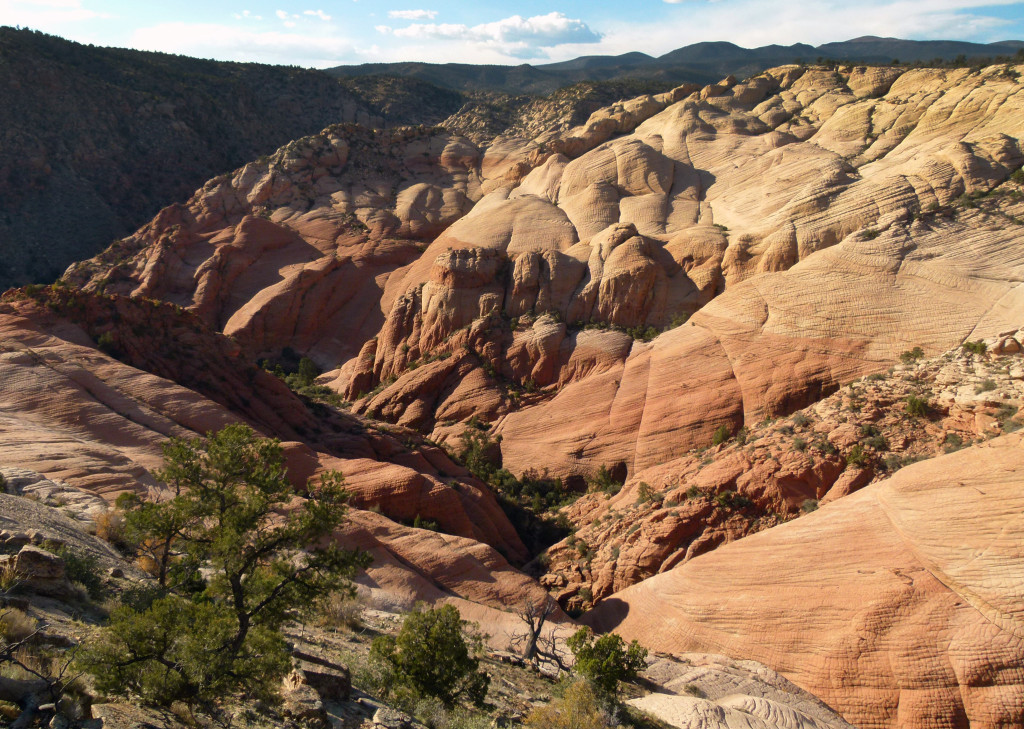 I headed back into the junipers and found my way back to the trail. It had been a tough 12-mile day up and over a lot of slickrock.

Then, on the final stretch back to the Jeep I passed another group heading in. I asked if they were going in for sundown. “Yeah” was all I got as a hurried answer. As they shuffled past I noticed the leader of the group was focused intently on a print-out from a website. I’m not sure which site it was, but… it wasn’t mine. 🙂 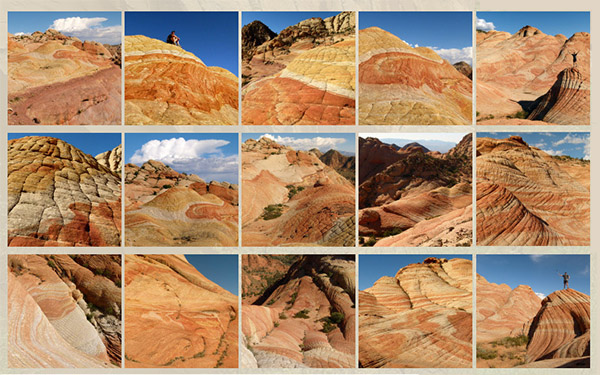