From the Across Utah 2009 Trip Report

I am officially off to begin my adventure. Now just 2.5 days of driving across the state setting up my cache sites. All-in I’m looking at 12 cache containers plus my initial pack of supplies. Seems like a lot until you think that this is all I will be eating/wearing/using/doing for the next 7 weeks! 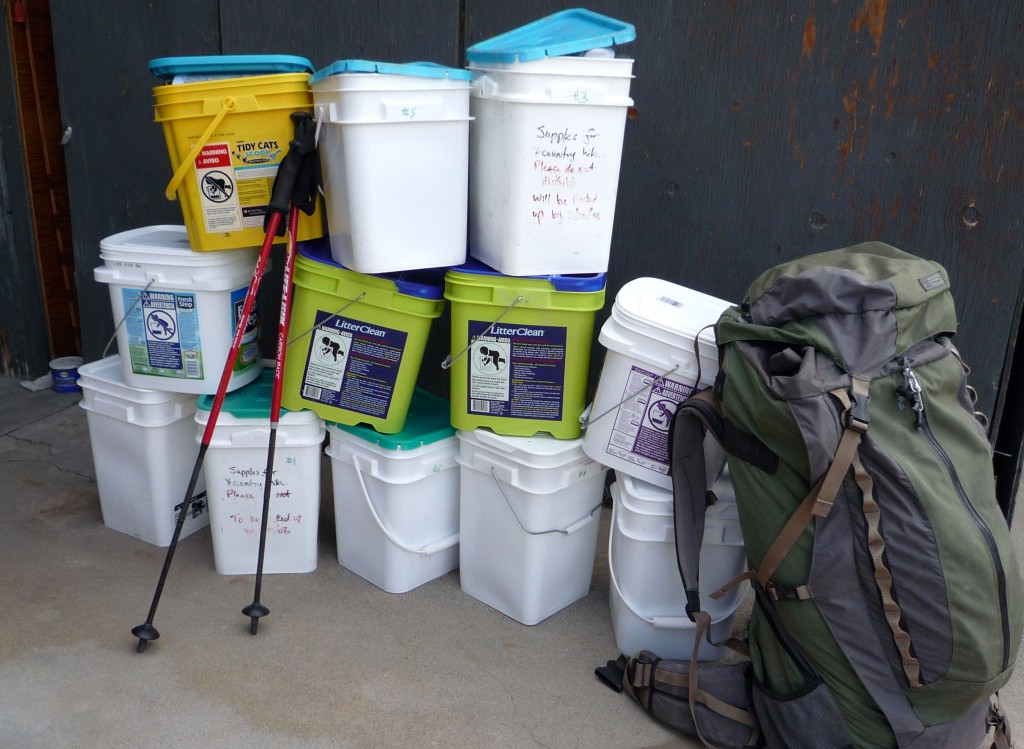 Having lunch in Escalante. 5 cache sites set -– 4 more to go. I hope they stay in place! It’s raining off and on. 🙁 Otherwise all is good.

This is it! My parents dropped me off at the Utah/Nevada state line early this afternoon. After a few pics by the “Welcome” sign, it was time to start walking. 🙂 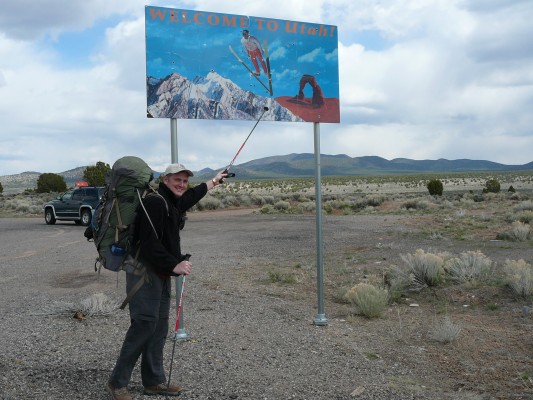 trabera said,
April 27, 2009 at 2:04 pm
Good luck man! I’m with you there in spirit because my mind and body would probably have both bailed out in the first week! Super jealous of you. Major dinner on me when you get back!

kim_giggle said,
May 7, 2009 at 3:58 pm
hey jamal…..well dang..my name is kimberly but i go for kim and your mom told us about you going on a long hike…i think thats AWESOME….i love hiking…your lucky, really…..
i wish you a GOOD LUCK on your trip….i think its SERIOUSLY LONG……and hope you
make it to the end by 46 days….lol…:]]

Left the stateline late-afternoon and headed E with a pack heavier than I had hoped. I quickly learned the town of Uvada was non-existent. I walked the railroad tracks a ways then headed SE into the hills along a Jeep route. I had been worried about it being cold as it snowed on me while placing my final cache yesterday, but by this point the sun popped out and it was nice. Had to do a little cross-country travel to get to another Jeep trail. Saw a lot of shards of obsidian along the way. Camped at the top of a ridge and watched the sun go down. As it cooled way down I built a fire- but had to put it out before too long as the wind picked up. Had my chicken curry dinner in my tent. 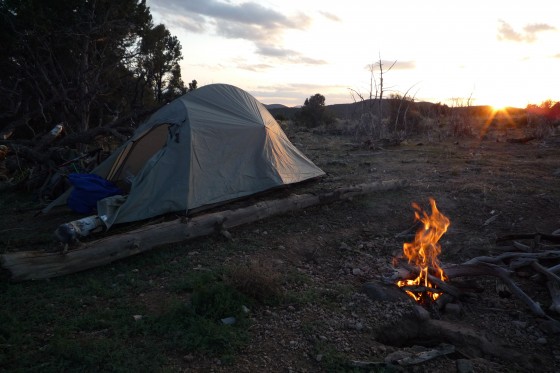 DAY 2 — Through the Hills

It was a cold night last night, but not freezing. The wind however gusted hard all night long. I was glad my new lightweight tent held up.

It was a long day winding through the juniper and sage covered hills of the Dixie National Forest. 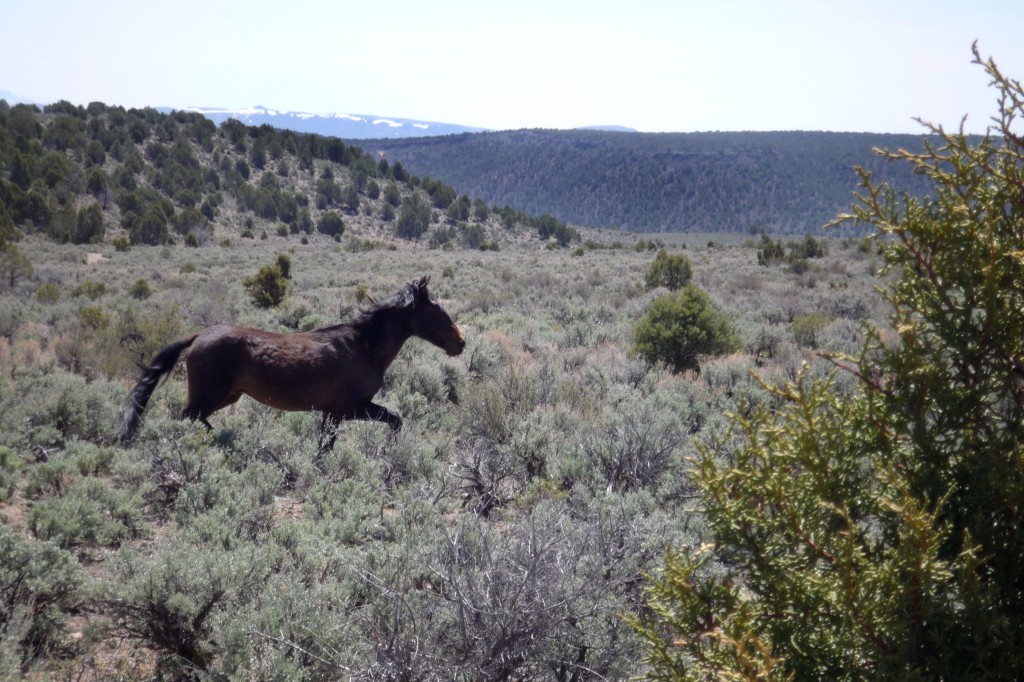 I saw a wild horse which was exciting. I also ran into a big jack rabbit who acted as if he wanted to share my lunch. I also saw about five jet fighters doing maneuvers above me to the west. Area 51?

I found flowing water in Nephi draw and then headed cross country toward Enterprise Lake. I didn’t make it, but I came close. Camped on a ridge and had re-hydrated chicken and noodles for dinner.

The wind at my camp last night was terrible and kept me up much of the night. That and a sore body made to slow start to the day. Days 3 and 4 seem to always be the hardest.

By mid-day I had made it down to Enterprise Reservoir with the wind still gusting hard enough to nearly blow me over as I walked. Loaded up on water and headed toward Flat-topped Mountain. I saw a lot of deer as I climbed through the fire-damaged forest. The views on top were great- looking ahead to the Pine Valley Mts and my route for the next two days. 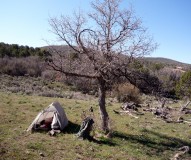 Got out late again as I did many tasks at camp in the morning: filtered water, set up solar panel to charge and re-packed gear. When I set out I quickly learned that the route I wanted to follow had been de-commissioned so it was basically a bushwhack all the way up the drainage.

By mid-day I connected with a Jeep road that would take me over two passes and through a valley. I saw deer all day long- everywhere.

At one point today I passed an old ranch house in Ox Valley. Two visions played in my head: Pig-tailed girl coming out to offer apple pie OR something straight out of Deliverance. I quickened my pace and saw no one. In fact, I haven’t seen another person since leaving the state line… except for Mr. Shadow. 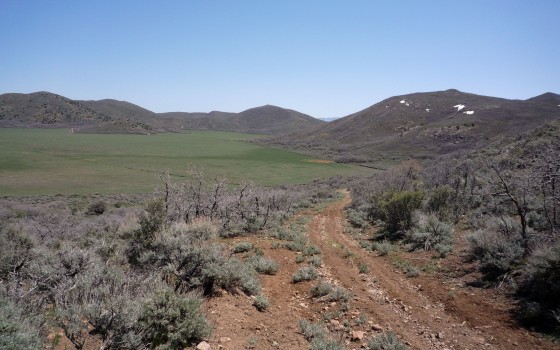 The day ended with another long session of fighting through brush. It was so discouraging taking 10 minutes at times to get 10 feet! Scrub Oak- so named because it will scrub all the skin from your bones! It made for one of my longest short days ever.

Jamals.parents said,
May 7, 2009 at 8:54 pm
Grandpa Frakes says if he were 40 years younger he would be right there hiking with ya!

Nothing great to report today, just a lot of walking dirt roads. I decided to skirt the next mountain to the north to bypass any more brush or possible snow. The result was a long, fairly uneventful day.

However, I did take a census of the most popular cans/bottles thrown out on the side of the road. Take a guess… and I will reveal the top 5 in my next post.

Daniel said,
May 4, 2009 at 2:45 pm
Hey, glad to see your tech gear recovered from its initial lapse … Following your daily posts is not quite as good as hiking southern Utah on my own, but hey, better than nothing! As for the cans, I would guess that diet coke was the only soda and the others were non-beers like Busch Light, Bud, Bud Light, Coors Light. It’s probably evil though to mention beer while you are out there sipping a lukewarm ‘09 Utah vintage of “Eau de Mudflat” 🙂
Best regards, Daniel (aka Happy Canyon – Poison Spring)

Jamals.parents said,
May 5, 2009 at 5:28 am
Even as a little kid you were always good at making up games to keep us entertained — and now you’re involving everyone on your hiking blog, and enticing them to “count the cans.”
We can’t wait to see the results!
Love, Mom & Dad

So… That’s what the litterbugs of UT drink. BTW, if I had included today’s findings in the results, two party piles would have put Bud Light on top.

Now the update: I thought I heard kittens in the night. This was not good because the momma cats out here are not the kind you want to camp near. I listened closer and determined it was a bird- at least that’s what I convinced myself so I could sleep. 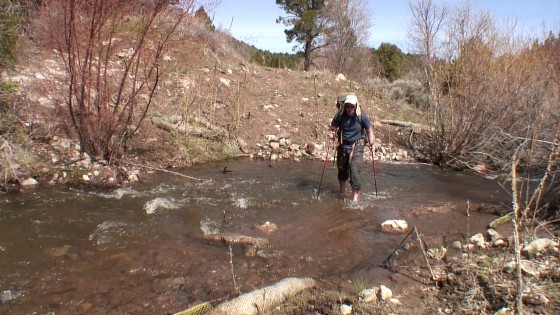 In the morning I continued up the old road and then did another x-country section to attain a ridge. Then an old road and then more x.country. I had a great view of Pine Valley and the mountains of the same name. The view with ample snow still on the higher slopes confirmed my decision to take an alt route farther north which wouldn’t go so high.
It was a tough climb out of the valley. My feet are killing me now. I mean, my whole body is sore, but overall I feel I’m holding up pretty good. Neither my knee problem from last year or my recent Wii Fit injury have been an issue — it’s just my aching feet slowing me down. I’m really not happy with my new shoes. 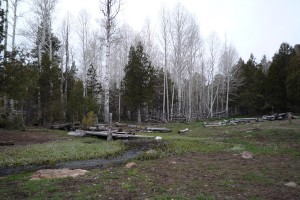 But I push on and climb high into the mountains. On the highest slopes I was surrounded by patches of snow, but could always find a way around without getting into the white stuff.

I finally got to White Rocks Reservoir — a very cool place. After going through a very cow-infested meadow, I made it to Quaking Aspen Springs where the water was clean. A small cabin was here. It was kept up, so I’m curious who it belongs to.

Just down a ways towards Commanche Creek, I could see the Kolob Canyon in the distance: my goal for tomorrow night. 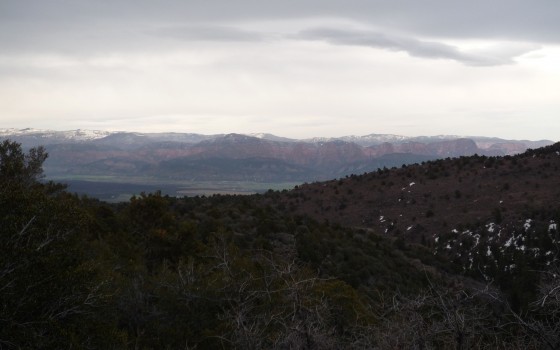 Now over the saddle of the range I begin the very steep trail down Commanche Canyon. I would hate to come up this route as it’s just a non-stop, brushy climb. On and on it went, I hiked until it was dark and then found a small place to camp.

Daniel said,
May 5, 2009 at 3:36 pm
Grin .. looks like I came *very* close to nailing that litter contest. I had “inside info” though .. spent an evening policing up trash while out camping near Tropic last summer.
New shoes? You go on a 500mi hike wearing NEW shoes ?!? I hope you had the foresight to stash a pair of old well-worn sneakers with your next supply drum …

sexilovurr said,
May 9, 2009 at 12:51 am
I would have never guessed Hawaiian Punch would be on the list i would have thought Mountain Dew would have been on there.

It rained during the night. Not that hard though, so all my gear stayed dry.

It was a long exit from Comanche Canyon with a lot of brush. My feet were so sore I took a drastic measure and took my multi-tool and cut a slit in the back of the shoe which was rubbing the worst. Time will tell if this was a smart or idiotic move.

Emerging from the canyon I had to walk through the small town of New Harmony — the only town I will pass through on my trek. It was a strange place; like a ghost town almost. Though Saturday early afternoon, there was nobody outside. Finally I see a person outside dumping trash at the LDS Church. He waved and then turned back to his chore. Other than that a few cars passed me by, but that was it for New Harmony.

From here I had to road walk across the valley. Road walking sucks. It’s boring and seems to hurt my feet more. 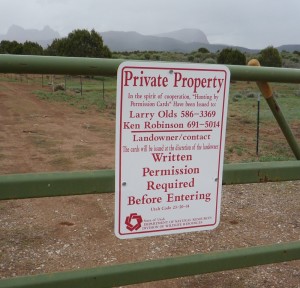 Then I got stuck in a maze of dead-end roads surrounded by “Private Property” signs. I was so frustrated- all my maps were wrong and I couldn’t get to where I needed to be w/o “trespassing” or walking 6 miles around. It made me think of the rarely sung final verse of Woody Guthrie’s “This Land is Your Land”, but I wasn’t that bold. Instead, I found the one parcel of land which wasn’t posted, jumped a fence and quickly made my way across the 1.5 miles of rolling hills. The whole time I felt like I was on a prison break.

Once across, I found once again I could not get back to the road without cutting across a posted area. As exhausting as it was I finally found a way around.

With a little more road-walking (still sucks) I found my way to the entrance to Zion National Park. Nearby I had my first cache so I reloaded my supplies. I got my permit and began walking the road to the trailhead high above. 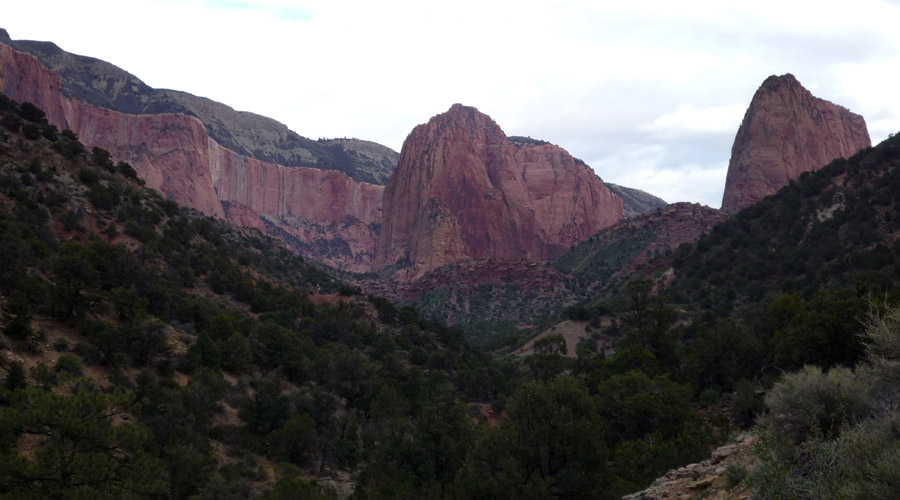 It was a long 3 miles to the top with my newly re-loaded pack. Along the way many autos passed me by- then one stopped to ask if I wanted a ride to the TH (trail head). It was three guys and I had already said thanks but I would walk, then I saw the driver and said “Hey- I know you.” It was Andrew Skurka, Adventure Magazine’s 2007 Adventurer of the Year. He is someone I admire, as he is a long-distance hiker extraordinaire and promoter of ultra-light technique. I asked him not to give me a hard time about the size of my pack. He was pretty kind, though he did chide me a bit about my sandals bungeed to my pack. He and his buddies had just finished the Trans Zion hike in ONE DAY! I will take four days to cover the same 47 miles. They were curious to hear of my plan and offered food, water, etc. Very cool guys. Check out more on Andrew via his own site if you get a chance:

I finally got to the trailhead and walked the final 3.5 miles to camp. The Kolob Canyons by moonlight were awesome.