Got out of camp late after repacking supplies and putting trash and dirty clothes in my cache. I re-hid the cache and will pick it up by Jeep after my hike.

The first four miles of the day included a very rough cross-country portion with no established trail to follow. Twice I had to climb down a cliffband to get to the the canyon below to continue. It was slow going, but at each tough spot I found a safe way down. Finally at the bottom I followed a sandy wash which eventually led me to a gravel road.

Finally I began climbing up into the mountains back on a footpath again. Although I made 12.4 miles for the day, I still didn’t quite reach my goal of getting to the top of Shay Ridge. I should still be able to reach the summit tomorrow as planned.

At camp I had to hang my food in a tree as there are signs of bears in the area. Enjoyed a camp fire and a night sky full of stars.

Day 13:
Started the morning with a STEEP climb to Shay Ridge. After passing stream after stream yesterday, somehow I’ve hit a dry part of the mountain and in doing so I ran out of water along the way. At the top of the ridge I investigated an out-of-the-way cow pond I spotted on the map. The water was terrible — but at least I had it. Another mile up the mountain I found a good stream and instantly dumped the cow water.

Around noon it clouded up and rained a bit. I ran into the first patches of snow at 9500′. By the time I was at an elevation of 10,000′, the rain turned to a mix of sleet and snow.

I waited out the storm under a big pine tree wondering if I was wise to continue as I felt the temperature dropping quickly. The storm seemed to dissipate so I continued on. At 10,500′ I was traveling in and out of deep snow patches. As I would try to make my way across the crusty snow I would frequently break through and find myself up to my thighs in the snow. I decided to do this in shorts as I wanted to keep my one pair of pants dry for camp. I reached the saddle of the mountain and decided to camp for the night when I found a patch which was free from snow.

Then, all of a sudden the wind started to blow and out of nowhere it started snowing. It continued for about 10 minutes and then quit as quickly as it began. About 15 minutes later it happened again. For about 5 minutes I was in the middle of a near-white out fog/snow mix on top of this mountain. It lasted for about another 10 minutes… and then stopped. Then… the sun popped out quickly melting the new snow and bathing the entire mountain in a golden glow. I wrapped myself in the warmest clothes I had and holed myself up in my tent for the cold night. Throughout the night the wind would blow with a force I’ve never heard from inside a tent — but thankfully my tent stood strong. 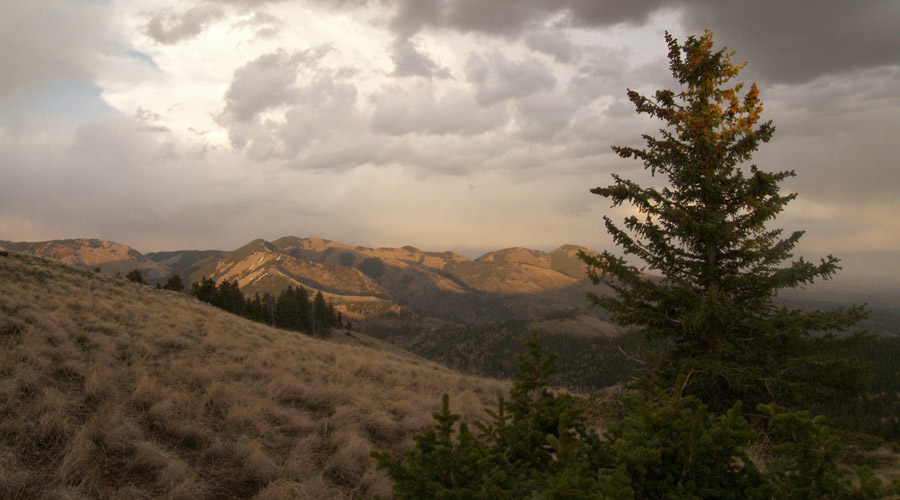 Day 14:
The previous night was very cold and the wind howled all night. But, the morning brought a beautiful, clear day. To get my blood pumping I decided to climb to the nearby summit. I peaked out at 11,036′ according to the GPS (though the topo says it should have only been 11,010.) The views on the top were amazing. I could see all the way back to the Maze area to the north and all the way to Comb Ridge, my ultimate destination, to the south. To the west I could see the Henry Mountains and to the east the Sleeping Ute and even the San Juans in the far, far distance.

Back on the main trail I ran into more deep snow as the trail circled the highest peaks. One stretch was particularly scary where the deepest snow was on a very steep slope. There wasn’t the danger of an avalanche, but I could have easily slipped on top of the snow and found myself in a free-fall human sled-slide down 100 feet or so into the forest. But, I took my time and all worked out ok. Once out of the snow the trail descended quickly down to the valley. I saw several deer along the way.

I then followed a gravel road to Allen Canyon where I ran into a strange “old timer”. I couldn’t tell if he was impressed with my adventure, protective of the nearby private land — or just generally confused. He looked like Ross Perot + 20 years and twitched when he asked my questions. The second time he asked me if I was alone I was slightly concerned. He wanted to know where I was headed — so I was vague as visions of Deliverance came to mind. When he asked me a THIRD time if I was “all by your lonesome” I lied and said “yeah, but I’m meeting some people in the next canyon over” and also quickly pointed out that I had a SAT phone with me. Kinda eerie.

About a mile up the road I came to a locked gate across the road with a NO TRESPASSING sign on it. I knew I would be passing through some private property; but it was my understanding as there is an easement along the road and as long as I stay on the road I’m within my rights. But… as I climbed OVER that fence thoughts of that Old Timer, his 4 sons and a their pals Smith & Wesson overwhelmed me. I hiked the next 3 miles faster than ever until the I was well past the private land and back into the depths of the next canyon.

Camped for the night near a beaver dam nestled in a narrow portion of Allen Canyon near the junction with Chippean Canyon. I could hear the beaver working throughout the night. At one point when I coughed it got agitated and started chirping at me. I really thought it was going to come attack my tent and try to run me off. Crazy beaver!

Day 15:
Allen Canyon SUCKED! So much brush and beaver dams to navigate around; it was slow going. Finally climbed out to a ridge for faster travel. When I did I was welcomed by a sign which said: “UTE Indian Land — No Trespassing! Violaters will be held to highest penality allowed by Federal AND Tribal Law!” Yikes! (NOTE: a year after my hike, the National Forest removed the Allen Canyon route from its official map.)

Finally made my way out to the main gravel road and felt somewhat safe. Made my way cross-country to Comb Ridge. Found more pottery shards along the way and an awesome side-canyon with colorful sandstone and huge alcoves. Long climb with many false summits finally brought me to the edge of the Comb Ridge. I camped right on the edge and could see the highway road-cut in the distance.

Stars and crecent moon were a delightful presentation for my final night on the trail. 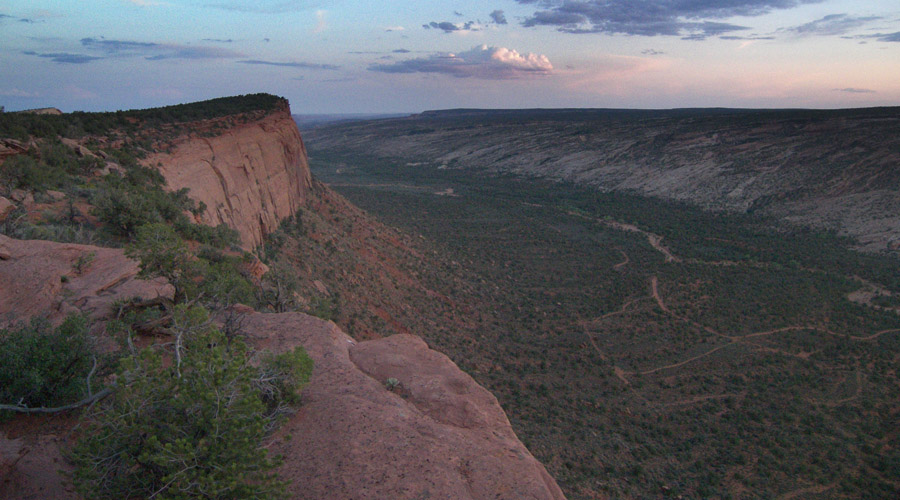 Day 16:
Got up early to watch the sunrise on the Comb Ridge.

An hour later or so I passed where the old road cuts through the ridge. Hayduke was right — there’s no need for another road through this country!

From here I followed a gravel ridge along the ridge for several miles. The views along the way were great. Ran into a bright green/yellow lizard — never seen anything quite like it (called a collared lizard.)

Soon I could see the paved road in the distance and even hear the cars on the highway. When I was basically right above the roadcut, I made my way down the slick rock slope to the east. 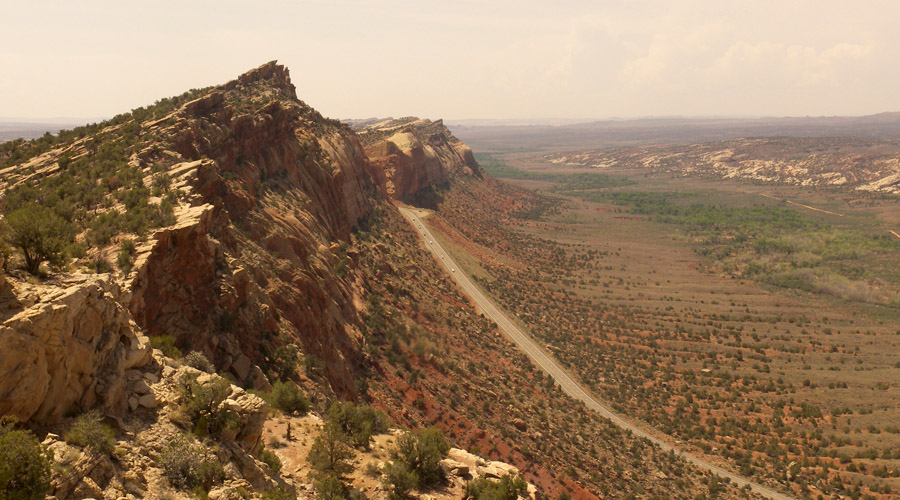 By 12:17 I reached pavement and the end of my journey!

After the Hike:
I’m back in California after a long day of picking up my caches and getting back to my Jeep… and a long drive home. Need to catch up on “normal” life.