Today I began my long trek across the Kaiparowits Plateau – the most remote section of my adventure. I spent most of the day walking on a bench high above the valley floor, but still below the towering plateau above- and it was a scorcher. It was mid-afternoon when along came a truck on the old 4×4 track I was following. It was Ranger Sue! She was out on patrol and said she never expected to see anyone out here; unless they were bighorn hunters. She gave me some extra water so I didn’t have to ration on the hot day — much appreciated! She also offered food and a ride- but those I declined.

Soon after saying so long to Sue, I left the road and began another section of cross-country travel. I found my way to a side canyon which would lead me to the main canyon I wanted to get to. All was good at first but soon I came to a 40′ drop. I didn’t want to backtrack so I tried to find way down. After a bit of scouting, I found a way to follow a ridge around the bend and then lower my pack down a system of boulders. This section took over an hour to complete. After that the canyon only had minor drops which were easy to bypass. Soon I was at Wahweep Canyon. It was hard work, but it was fun getting down this undocumented canyon. I have more terrain like this tomorrow, but I don’t think it will be as rough.

The bad news from the day: my lower leg muscle which I strained a few days ago slipping on mud in the Paria is really sore. I hope it heals, but it will be tough during 15 mile days with a 50 pound pack!

Today marked the half-way point of my journey in time — though unfortunately not in distance. Though still sore, my body was better today. However, the route up the creek full of cobble stones and some thick brush made for slow hiking. I had hoped to discover some Indian ruins today, but no such luck. The other major bad news of the day was that I lost my bandana. This is a bummer. I camped near the spring at the top of the canyon.

Ode to the Tan Bandana

Oh how I miss you, little tan bandana.
You were always there for me-
To wipe away my sweat without complaint.
You kept the sun off my back
And the crumbs off my face.
We had some good times and traveled far.
Not bad for having just met at REI.
But now you are free-
Go frolic with the sagebrush and lizards
I will always remember you
My little tan bandana. 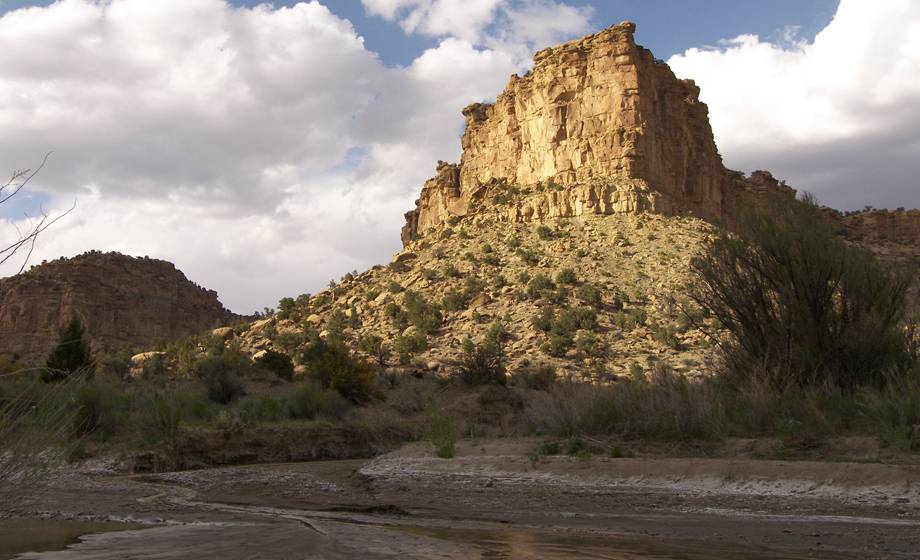 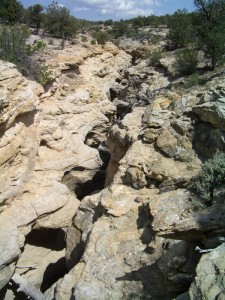 Wow — 2 full weeks on the trail. On one hand it has gone fairly fast, but on the other it seems like I have done so much and come so far. Woke up this morning to a dreary day. As I began to get out of the tent it started to rain. I tried to wait it out by doing what I could inside: breakfast, organization, etc. I finally decided I had to go and soon after getting out- it stopped raining. Within an hour I was to the cache I had set up with parents. All was good. Next I made my way cross-country toward Paradise Canyon. The side canyon I entered took a lot of work. Several times I came to dryfalls. Each time I had to climb up, go around, and then back down. Then, the canyon slotted up- yet there was no way down in. I had to rim-walk about 1/4 mile before the canyon widened a bit and I found a way down- albeit a very tough climb down.

Once there I dropped the pack and walked back up into the slot. I had to climb over a few logjams, but once inside it was really cool. The walls were less than 6 feet apart and rose about 100 feet high. I know not many people have ever seen this slot canyon.

Back with my pack, I continued down the canyon and finally to the main branch of Paradise Canyon. It was nice- small stream enclosed by towering sandstone walls. Camped at the junction with Last Chance Creek. Dinner tonight: lasagna with meat sauce, fruit cup and carrot cake Clif bar.

Today I made my way down the last bit of Last Chance Canyon. It got its name because the cowboys knew it was the last chance to get water while crossing the plateau. So, I took the opportunity to “camel up”. I followed a closed 4×4 road for a ways before setting out again cross-country.

This is were things got rough. The 1st canyon I had to cross was only about 60′ deep- but it had near vertical walls. I found a way down in, but could not find an exit on the other side.

I hiked up canyon until it finally ended at a dryfall. I backtracked to the only feasible exit – one that would require climbing. I scouted the route w/o my pack and it was doable – just tough. Slowly but surely I repeated the task lifting my pack up ledge to ledge. Then I crossed about a mile of bench-land before coming to the next canyon – it was bigger! This canyon was over 300′ deep and though its walls weren’t as steep, the top rock layer included a 10′ drop which I couldn’t get down. I had to walk along the rim for quite a ways before I found a way down in – again a slow tedious climb. 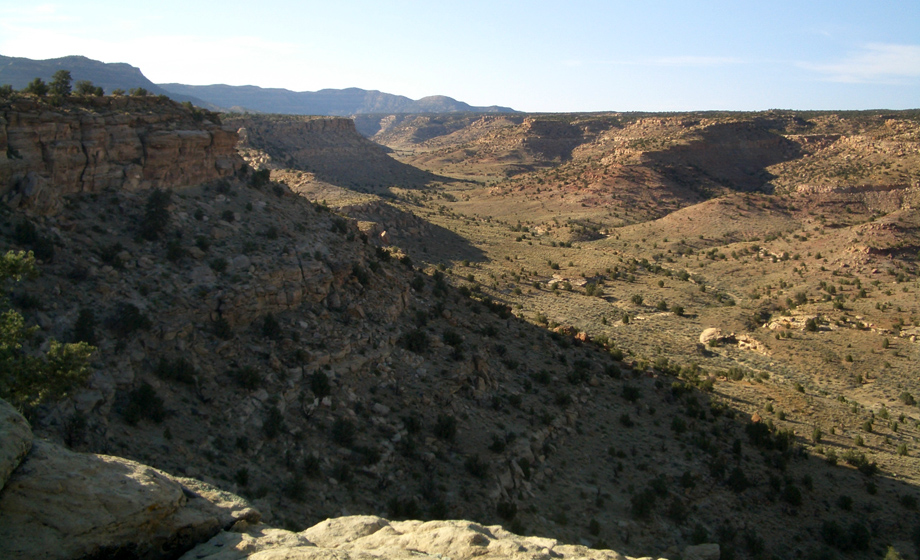 All the extra effort had been using up my water so I was hoping to possibly find some water at the bottom of the canyon- no such luck. I pressed on- down the canyon and then up a side branch where I hoped to get out to the other side. Of course – once again I met another huge dryfall.

So – I picked the least-steep side slope and started the climb out. This had me going up a talus slope of scree – or loose rock. It was very difficult and one wrong step and I could slide all the way back down to the bottom. After climbing about 300′ up, I came to a 20×20 flat spot before a mess of boulders rose 50′ more blocking access to the top. With the sun almost down and my body exhausted, I decided to camp here for the night- right on the side of the cliff. Tomorrow with more light and energy I will see if indeed I can make it to the top and out of this canyon. I still have water- but I need to make some serious progress to get to my next known source. Stay tuned…

Boy what a miserable day! It actually began at night when I was perched on the side of that cliff. Though I took extra care to anchor my tent, the wind picked up in the middle of night and was intent on blowing me off that spot! Rationally I knew I was ok, but in the middle of the night the mind isn’t always rational. It made for a restless night. 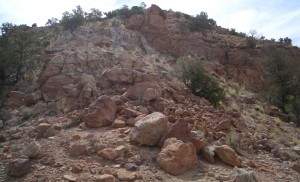 Once up, I packed up and tackled the upper portion of the cliff. It wasn’t that bad- but took a lot of careful footwork. At one point I pulled an Aron Ralston and pulled a big rock down on top of me. But, luckily it wasn’t THAT big and I was able to deflect it sans limb crushing. Who’d ever think big rocks are so apt to move?!

Once on top of the bench I made my way to the east to find the next canyon. Once there I quickly sized up an entrance strategy- it looked much easier. But… Half way down I hit an unseen cliffband. Once again I had to move a ways laterally before I could find a way down. All of this effort while the sun was blazing and I was running out of water.

I was down to 1/2 a liter of water when I approached the main fork of Reece Canyon. Though not a confirmed source, I was hoping to find water there. Denied. 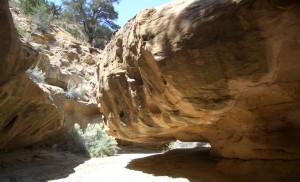 Not only was there no water, but the streambed which I had to follow was deep sand. I knew I had to do 6 miles of this before reaching a possible spring. It was rough going. I had to take a break every half mile or so and only allowed myself a sip of water each time. Probably slightly delirious, but I would hear running water only to then realize it was a bird chirping or the wind. The state also made me think of something else: why don’t they make powdered Coca-Cola; man that would’ve hit the spot. Someone should make that happen. Ok, back to the hike- I had reached a junction in the canyon: to the right was my intended route up and out of the canyon to a supposed spring 3 miles away and to my left an out-of-the-way canyon with a supposed spring 1.5 miles away. I say ‘supposed’ for each because springs are known to dry up- I have seen this already on this trip. I took option B- the closer possibility. By now I was really parched and was down to only a few sips of water.

Actually, I had another 1/4 liter packed away- but I wanted to save that for the ‘call the ranger and wait for help’ moment. This seemed more real than ever as I wasn’t sure if I had enough energy to seek out another source.

As I finally approached the supposed spring, I saw grass- and I knew that was a very good thing. Grass only grows out here in one case- if there is water… and there was. It was a very small seep and cows had made a mess of most of it, but I was able to climb up and get some from the true source. I drank a full liter on the spot! I had a granola bar and another .5 liter and I instantly felt so much better. It’s crazy how fast the body can deteriorate w/o water. 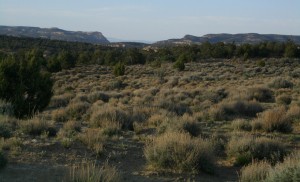 Feeling anew, I climbed out of the canyon, across the bench and found my way to the 4×4 road that would take me down another canyon and off the plateau. That’s where I camped for the night. It’s funny- being back by a road makes it seem like I’m back in civilization. In fact, I saw a person (in a truck) for the first time in five days. Sure to see more tomorrow as I enter the Escalante region.

More pictures available in the Gallery