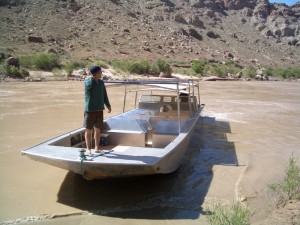 Got up and tried to pump some water from the Colorado which I had let settle overnight. It was a tough job and took 10+ minutes just to get a liter. Packed up my gear and met up with the river runners (Tex’s Riverways of Moab, a great bunch of people) who transported me across the river and also brought me my cache of more food and clothes– they also had some extra water so I wouldn’t have to pump any more from the Colorado.

The downside to the fresh supplies is that they along with full water pushed my pack up to 60 pounds (I have since learned to lighten my load!) The weight plus a HOT day and STEEP trail made for the toughest day of hiking that I have ever had in my life. It started with finding a way through the tough brush that crowded the river’s edge. It took almost 30 minutes for me to go about 300′ and as it was almost impossible to get through the dense brush with the pack.

Once in the side canyon I had to trudge through sandy conditions until finally climbing to the top of the canyon via a steep, rocky path. All of this while the sun was beating down during the middle of the day. It became a long day of moving from one shady spot under a rock to the next as I climbed the 1000 vertical feet out of the canyon.

Once above lower Red Lake Canyon (which has no lake) I had to walk .5 through a graben or valley of sand before climbing out another canyon to Cyclone Alley. Along the way I saw a big snake. It wasn’t a rattler, but still — that’s just what I needed to top off the misearable day; to be reminded that I’m in snake country and that I need to watch every step!

Then it was up another side canyon climb to the exit at Devil’s Lane — an incredibly scenic spot. At Devil’s Kitchen I was surprised to find a pothole of water. I was elated because I had been rationing my last liter for several miles.

Sundown found me high on a ridge in the Needles region where I could look way down to Chesler Park, my campsite for the night. I had to hike almost an hour in the dark to reach the primitive campsite.

Day 8:
As I was breaking camp I spotted a bird’s nest in the rock wall near my tent. A sparrow would repeated fly off and then return with food for its crying babies. 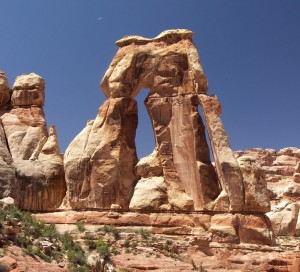 After leaving camp I hiked into Elephant Canyon. Once at the bottom I took a side trip to Druid Arch which was truly amazing. It dominates the skyline like no other arch I’ve seen — so much bigger than it appears in pictures.

It was another incredibly hot day with the temperature at or near 100. The temps make hiking during the midday hours next to impossible which shortens the distance I can travel. Water is common now but my filter is not working properly and it keeps clogging. I may have overtaxed it at the Colorado. I can see the La Sal mountains in the distance and with the past several hot days the snow on the higher peaks is rapidly disappearing. 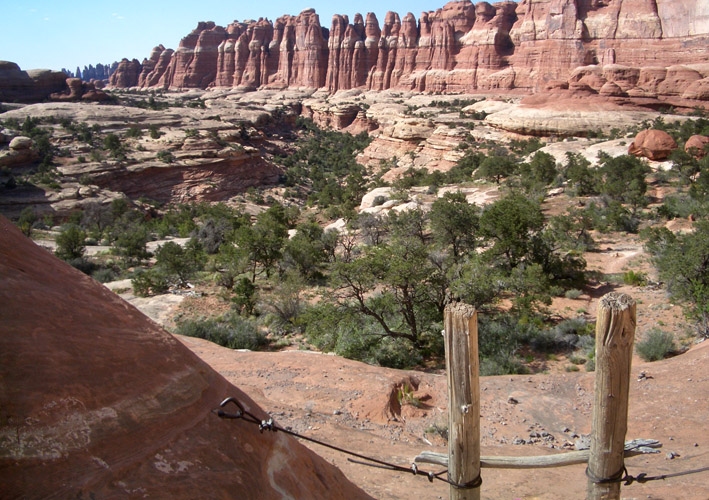 Had to climb a series of ladders and I crossed the upper reaches of slickrock as I made my way to Squaw Canyon. At one point the trail traveled through a “joint” cave which was so tight it was extremely difficult with the big pack. I eventually made it to Lost Canyon and shared a camp with the mosquitoes which were a nightmare.

Day 9:
Got off to a late start after running into three fellow hikers from Colorado. Farther down Lost Canyon the trickle of water became a full-fledged stream and the setting became much more lush. There were a few pools I was very tempted to take a dip in — but decided to keep moving instead. Saw several groups of people along this section of trail which made it seem crowded compared to the number of people I’ve seen in the last 9 days.

Now that I’m near following running water I have decided to drink it unfiltered since my filter is such a pain. It has given me new energy as I realize now that dehydration had been setting in. I dropped my pocket-sized digital camera into the sand today. The telescoping lens stuck in the sand. I tried the best I could to blow it out, but after one attempt to power down and back on and it was dead. 🙁 I have another camera with me but it’s not quite as easy to use due to accessibility.

I had a small break in the hot weather as there was brief rain in the afternoon. I hiked along the cool Peek-a-Boo trail to Salt Creek Canyon. Once there I stopped and checked out some more pictographs before going through an arch and traveling upstream.

Salt Creek is gorgeous with shin-deep water flowing crystal clear. The trails along the banks are overrun with small frogs through. No exaggeration — at times 3-4 frogs will hop from under-feet with each step. After losing the trail a few times and fighting through dense brush, I finally emerged to a nice area and camped for the night by Crescent Arch.

Day 10:
Today was a good day. First of all, happy Mother’s Day to Mom. Every time I see a cactus in bloom, I think of her. 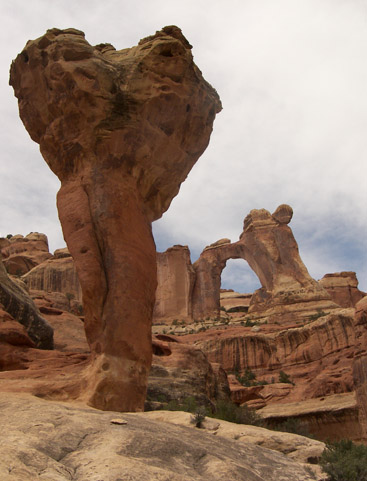 Early in the day I succeeded in getting to Angel Arch. This has been a goal of mine since childhood. It was incredible. I had lunch at the base near Molar Rock. After that I proceeded to take an unplanned scramble route up into the arch. It was absolutely amazing to stand underneath the opening of this beautiful span.

Later in the day I found four different sets of ancient Indian ruins including one that had several pieces of pottery shards littering the ground nearby. I spent a lot of time checking out these fascinating sites.

On a bad note, I found a new blister. At lunchtime my pinky toe was about the size of my thumb. It seemed to be better by the time I reached the night campsite, but it was still pretty big.

Also, the thrashing getting though all the brush has been rough so I am having to wear long pants despite the heat. Later in the day, strong winds and rain appeared. I haven’t seen another person in over two days. I passed the 100 mile mark of my hike today. I camped for the night above the Upper Jump waterfall. 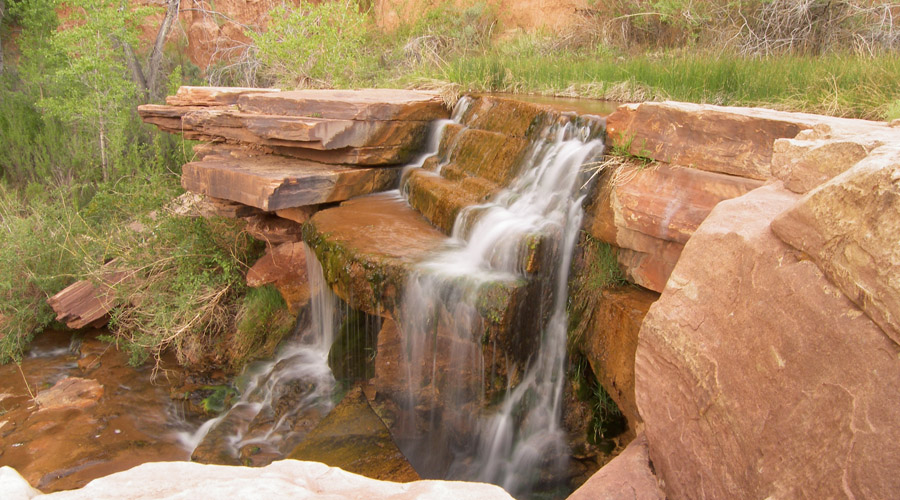 Day 11:
The day began with an encounter with big snake slithering its way through my camp. I’m pretty sure it was a rattler by its diamond-shaped head. I failed to get a picture of it as it slipped into the brush before I could get my camera. With camera in hand I tried to track it down. Suddenly I realized I was a potential candidate for the Darwin Awards as I stood in the middle of a patch of brush in shorts and sandals trying to get a picture of a big rattle snake with the nearest help about 20 miles away — by foot! I slowly moved back to the camp and was content with the image in my mind. 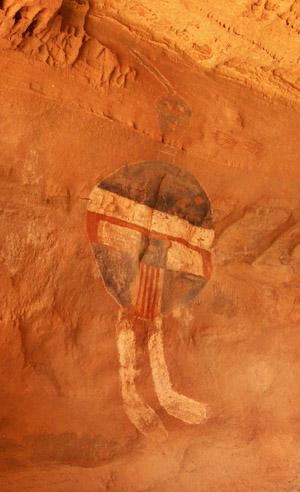 Today’s route took me by several more Indian ruins. The site not too far from my camp included a great pictograph panel called the Four Faces. A little farther up canyon was an incredible pictograph called the All-American Man. This is another site I remember reading about as a kid and always wanted to make it out to see it. The pictograph is colored red, white and blue and includes what appears to be an American flag. Many originally thought the drawing was a hoax created by cowboys in the early 1900s. However, recent carbon dating has authenticated the pictograph and dated it to approximately 1300 years old!

Farther up canyon I visited another incredible site of ruins. The site included rock grinding stone still in place and thousands of little pieces of pottery everywhere of varying sizes and colors. 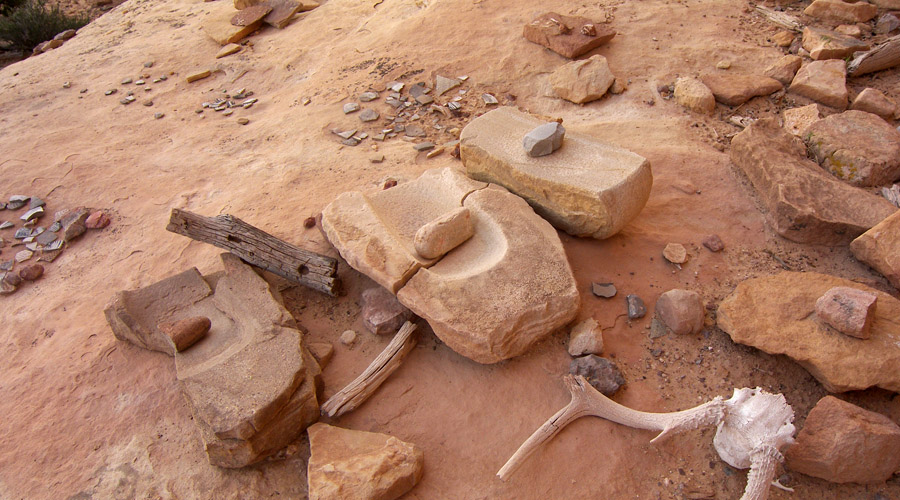 A little farther along I came to Kirk cabin — one of the first white-man settlements in the area. It was there that I met four people doing soil tests for the Dept of Agriculture. They were the first people I had seen in three days. It was a long hard climb out of the canyon where I found my last cache that I hid 11 days ago. It was great to have the “heavy” food. Feeling good — especially considering I’ve been drinking unfiltered water for the past two days.