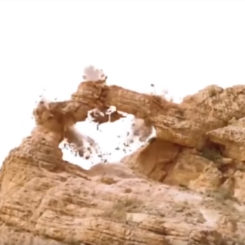 UPDATE: The Salt Lake Tribune ran an article with my findings. 🙂

UPDATED UPDATE: We know now the reality — read at end of page.

If you follow Utah hiking posts on social media, chances are you recently saw the story about about “Eco-Terrorism in Utah“. I don’t want to give the story any more publicity so I’m not going to link to it, but there was a video showing somebody demolishing an arch and then in a second video exploding two hoodoos “somewhere” in Utah.  The videos were definitely suspect for many reasons, but the destruction definitely seemed real as we witnessed a scenic arch explode and collapse and then hear the presumed vandals laugh about it. There was a lot of (deserved) outrage on the various forums and Facebook groups that shared the videos, but nobody could identify the location of the arch or the hoodoos which only deepened the mystery.

After my various hikes I’ve developed a knack for identifying locations in southern Utah (guess that’s a side-effect of walking 2000+ miles criss-crossing the state!) But I’d never seen this arch and more puzzling the wide-angle background of the hoodoos video looked familiar, but I couldn’t pinpoint it. Not knowing the true location of the videos bugged me all day!

I really thought the background of the arch video looked like Elephant Butte or Amasa’s Back near Moab. After checking some photos I thought I had a match, but it wasn’t quite right. At first I assumed it had to be a remote location, but then I wondered if it might actually be from the park road in Arches. I pulled up Google Street View and to my amazement… not only did the hill match the one in the arch video, but the right side of the horizon matched the “spire” background in the hoodoo video! It was a two-for-one! I did some rough comps in Photoshop and feel 99% sure that we are looking at composites.

Here’s a comparison of the key elements when compared to the view from Petrified Dunes Viewpoint in Arches National Park: 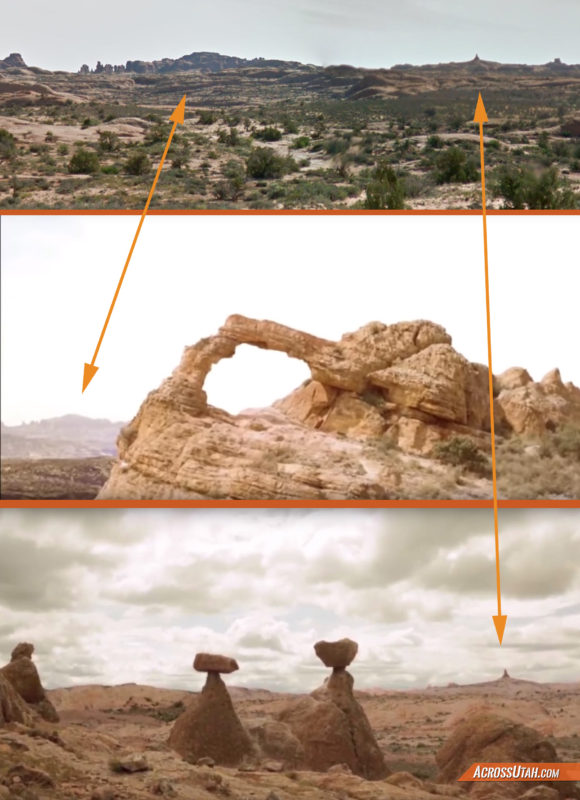 The above stills from the video are cropped a bit, but in the video itself one can see other landmarks on the edge which also match. 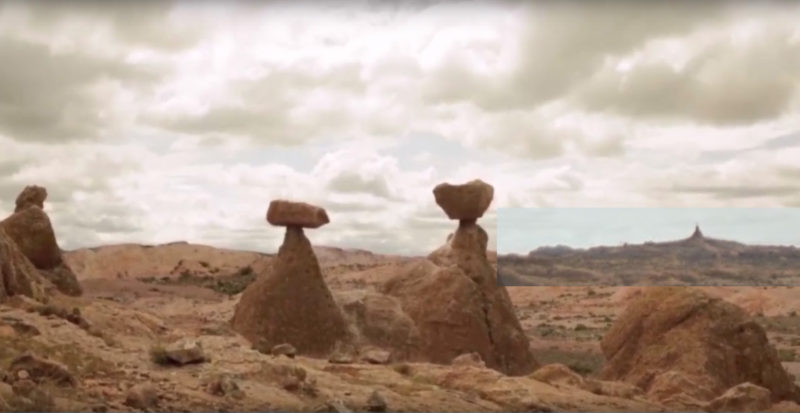 So… it’s possible that these foreground features are near that location, but extremely unlikely IMHO. Putting aside inconsistencies in the geology, how could such photogenic features remain unknown to the masses despite being so close to a road in Arches? Thus I feel confident in saying the video is fake at least in the sense that the backgrounds do NOT go with those foregrounds.  I suspect that a digital artist comped several layers together to build the scene. Does the arch and the hoodoos really exist elsewhere? Are they still intact? Or, might they be entirely created and destroyed by CGI software? I can’t say for sure at this time but I definitely hope it’s all fake. If they are computer-generated the arch really does seem “inspired” by a Arch Rock in Valley of Fire and the hoodoos by the Rimrock Toadstools within the former boundaries of Grand Staircase-Escalante National Monument. They are NOT these, but they seem very similar. Hopefully we will know more soon.

Next question… why would somebody do this?! Hopefully we will find out the answer to that as well in the not-too-distant future.

UPDATE: This was in fact a hoax. Nearly a year later it was revealed that several “European Filmmakers” created large-scale models in Mexico and filmed their destruction. This video was then superimposed onto Utah landscapes. They said it was to prove how public land needs to be protected. (not sure how this hoped to accomplish that.) They were also disappointed it was debunked so quickly. 🙂