Below is the Daily Journal account from my original Curb Pavement website which tracked my hike across Canyonlands and the Abajo Mountains — one of the longest stretches w/o pavement in the United States. It was only my second major hike (100+ miles) and looking back my perspective was definitely ‘green’. So, keep that in mind as you read along:

5/3/2007
Hello from Utah! After 1000 miles driving in 24 hours… I’m ready to begin tomorrow! It’s rainy and chilly here — but that’s supposed to change in a few days. In theory I will be on the trail tomorrow evening.

I planned on beginning today with a 40-mile bike ride to the trailhead of Horseshoe Canyon. However I got off to a later start than anticipated and then was greeted with a terrible storm. I decided to forego the bike ride and simply drive the gravel/dirt road to the trailhead. I really hated not being able to do the bike ride, but it’s a good thing I didn’t attempt it because it gusted a cold rain all day and the road was a real mess. It took me several hours just to DRIVE the road. Incredibly, soon after arriving at the trailhead the sun popped out and there was a nice rainbow. However, soon it clouded over again and got really chilly. With the sun going down and storms still all around I decided to spend my first night IN the Jeep at the Horseshoe Canyon Trailhead. Tomorrow the true adventure begins.

Day 2:
Spent a cold uncomfortable night in the Jeep. It rained most of the night and got so much colder than I expected. I awoke to see snow on the mesas around me! I packed up my gear and headed down into Horseshoe Canyon. I saw a few dinosaur tracks along the way which were circled with rocks from previous hikers.

Once to the bottom the air was warmer and there was a trickle of a stream running through the canyon. I visited the first few pictographs sites for which the canyon is famous — amazing paintings by people who lived in the canyon thousands of years ago. 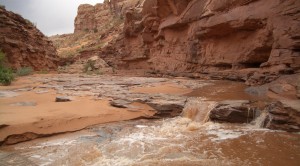 A few miles upstream and small trickle turned into a roaring stream. Not much farther the creek was a small flood — amazing.

After checking out a few other pictograph panels, I stopped for lunch at “The Great Gallery” — definitely one of the best pictograph panels I’ve ever visited with life-sized picture decorating an entire wall. 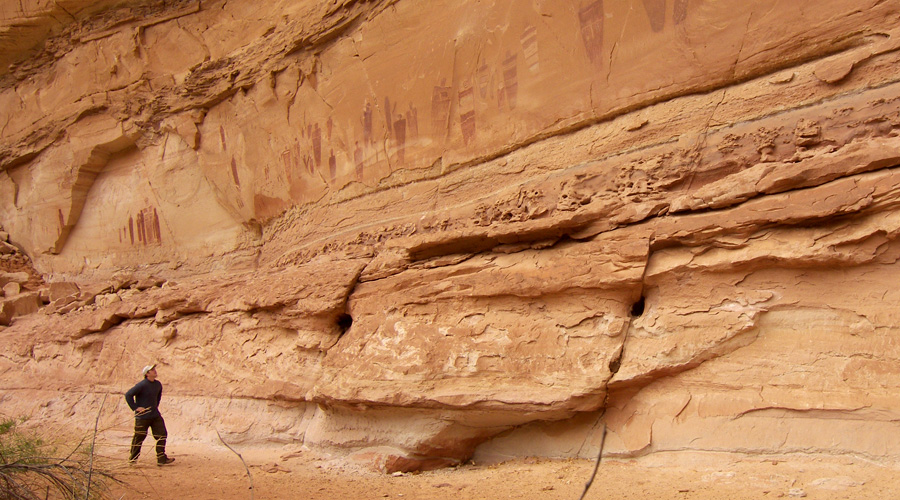 Instead of climbing out at “Dead Man’s Trail” and crossing the mesa as I had planned, I decided to continue up Spur Fork Canyon — the flood was entertaining and provided easy access to water and I preferred the temps in the bottom of the canyon to the top of the mesa. Soon after passing the National Park boundary up canyon I passed the jct. with Blue John Canyon. Up this spur is where Aron Ralston got stuck and had to amputate his arm a few years ago.

Soon after that I came upon a herd of wild horses — they intently watched me pass from a rock outcrop almost a hundred feet above me. 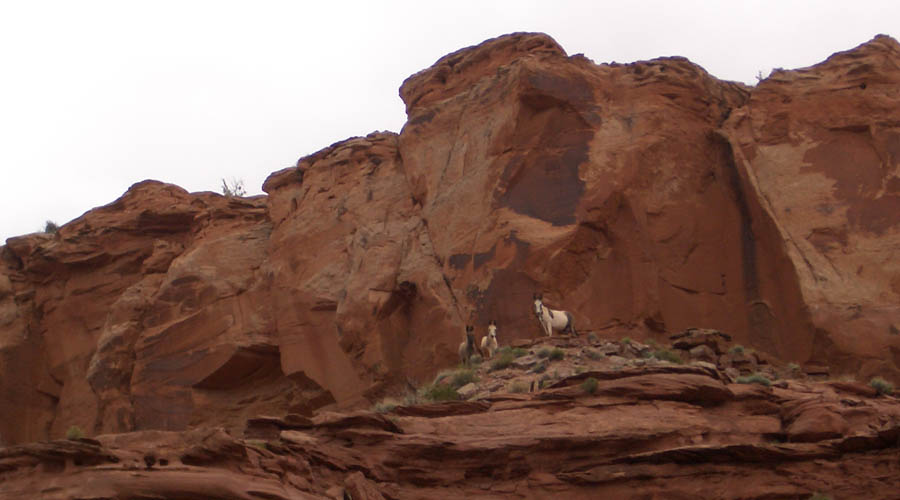 Day 3:
I woke up to more rain — gentle, but very cold. Soon the rain stopped and I realized it was quieter than the night before. When I got out of the tent I realized the nearby flowing stream from the day before was now nothing more than a series of standing pools.

After breaking camp I continued up Spur Fork Canyon. Since I didn’t plan on hiking this canyon I didn’t have detailed maps or really know what to expect around each corner. But, there were no major surprises. I had to navigate a few minor rockfalls/pools; but nothing too serious.

After filling my water bottles at Outlaw Springs — probably named after Butch Cassidy and his gang — I searched for a way out of the canyon. I found a rockfall which looked like it was feasible route. It was a tough climb out of the canyon with no existing trail; but it worked.

As the sun was going down I made my way along the canyon’s rim, across some slickrock, through an amazing green meadow, through a forest of sagebrush and finally to the sheer edge of Millard Canyon where I camped. I was so exhausted that I went to bed w/o even preparing dinner. As I dosed off there were coyotes howling all around me. 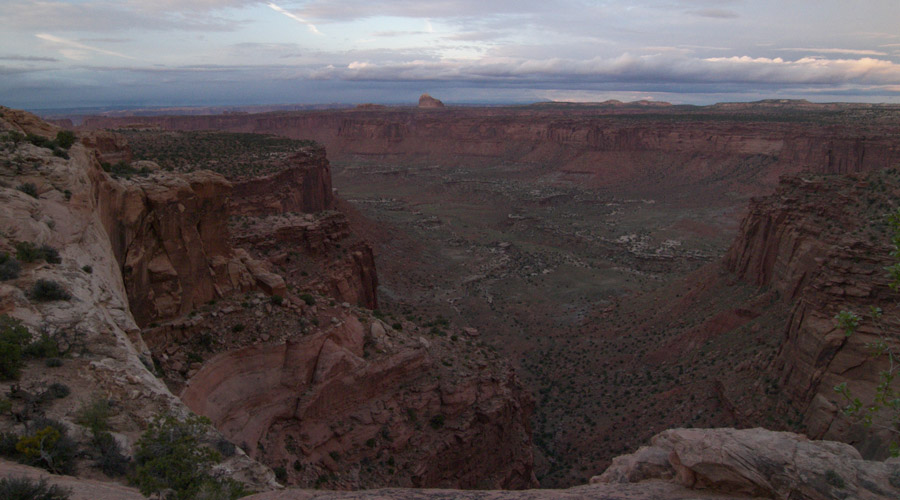 Day 4:
It was another very chilly night. I actually woke to frost on my tent this morning! I’m not used to such cold nights on the trail — I sleep in all my clothes and shiver most of the night just waiting for the sun to come up!

As I continue on my hike I can see the Abajo Mountains in the far distance. There is a lot more snow on them than there was when I dropped my cache off 5 days ago. I made my way down the Orange Cliffs via North Canyon Trail — a very steep and rocky trail. I cannot believe it was pioneered by a cattle runner back in the early 1900s — how cattle ever got up that trail I have no idea. Later in the day it warmed up and I was happy to be able to find water along the way. 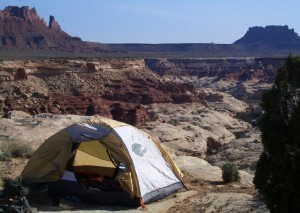 I wasn’t able to make it as far as I hoped and ended up camping at a very cool site on the rim of Horse Canyon. My body is sore and, like last year, I have blisters on my feet again. Luckily they’re not as bad as what I experienced last year though… yet!

Day 5:
I started the day by hiking along a jeep road but soon took an uncharted short-cut over a ridge. It was a tough climb but the views are fabulous. I could see the snow-covered La Sal Mountains in the distance and as I contoured around the mesa the entire Maze region unfolded before me. 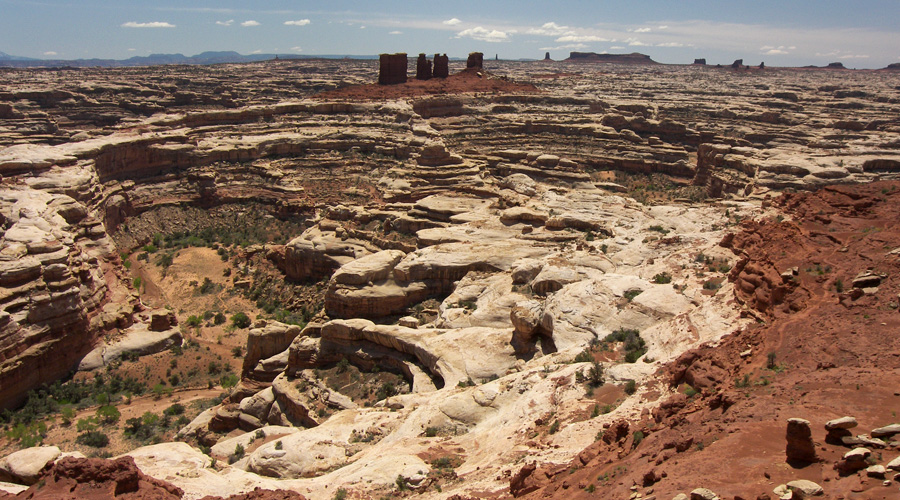 I made my way back down to the road at the point where it ends at Maze Overlook. The views were incredible with The Maze and Chocolate Drops dominating the foreground and The Land of Standing Rocks prominent on the horizon. From there I descended into The Maze which was extremely tough work as a solo hiker with a 50 lb. pack. I had to lower the pack with ropes several times. Several of the spots were pretty sketchy — and though a fall probably wouldn’t have been fatal — it surely would have made for broken bones and a bad situation. It took over three hours to go 1 1/2 miles.

At the bottom, it was a-MAZE-zing. The shear walls rose over 400 feet on all sides and twisted and turned constantly with many forks branching in all directions. I visited the “Harvest Scene” another fabulous panel of Indian pictographs.

With ample water in the canyon I camped near the exit route. The blisters are still painful, but I’m not going to let them slow me down too much.

Day 6:
It was a steep climb out of The Maze. It wasn’t as bad as the way in, but there was one spot which required me to lift my pack up ledge by ledge all while not tumbling to the ground 30 feet below. Once on top I was very near Chimney Rock in the in The Land of Standing Rocks. 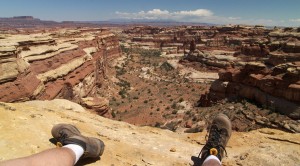 I continued on my route and soon came to a great view overlooking Water Canyon. Originally I wanted to hike down this canyon and loop around to the confluence and then to the Doll House area– but since I’m running behind I decided for a quicker route so instead I followed a jeep road that went directly to the area.

The cool weather has finally moved out and today it was downright hot. Making it worse the road was very sandy and there was hardly any shade to be found. I ran into a bike group from Rim Tours out of Moab who were out on a five day excursion.

The Doll House was cool — huge red, orange and white pinnacles of Cedar Mesa sandstone piercing the sandy landscape. I stopped in their shade to enjoy my first view of the Colorado River. I decided to rest for a while and have a lunch of dehydrated scrambled eggs and bacon.

Back on the trail the route down to the Colorado River was steep but afforded me nice views of the inner canyon. It reminded me of the Grand Canyon hike that I hiked with my parents 26 years ago.

I camped right next to the river and was amazed by it omnipresent power churning minute after minute, hour after hour. I waded in the cold “chocolate milk” water of the river. I hoped it would serve as a bath, but I actually think the silt-ladden water actually left me dirtier than when I went in! The smell of grilling steaks, from a group of rafters down river, filled the canyon. But I was content with my Chili Mac dinner. If all goes as planned I will meet up with the outfitter tomorrow to get across the river and a new batch of supplies. 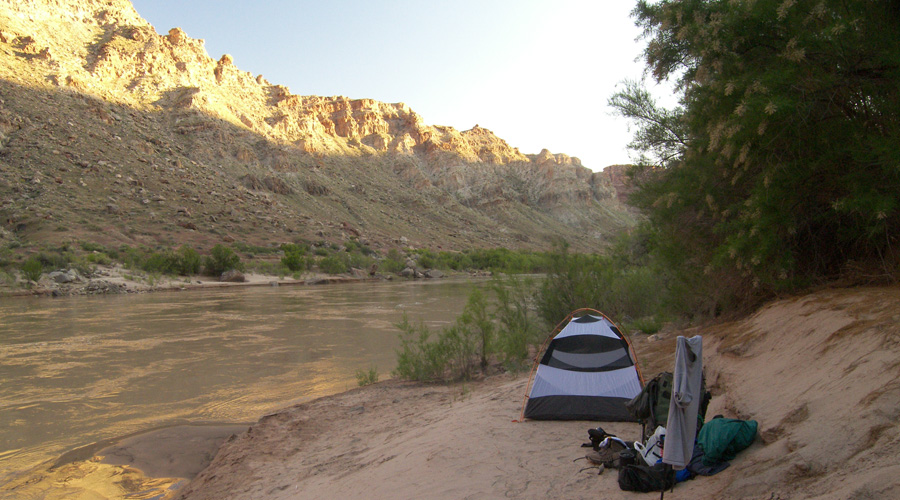