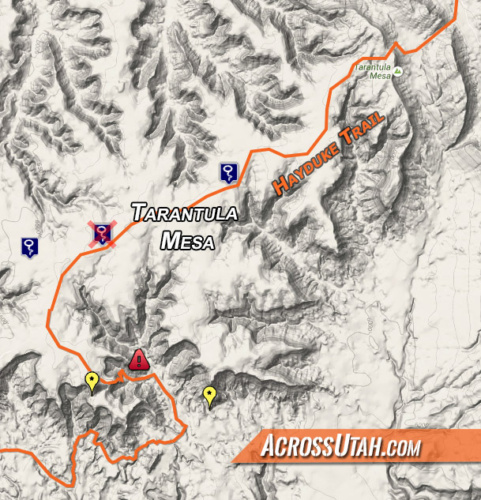 The Hayduke Trail crosses and then descends Tarantula Mesa as it connects the Henry Mountains to Capitol Reef (Section 5). The route across the top of the mesa is very straightforward as it follows a dirt road passing two waterworks systems along the way. However, this boring walk quickly turns into an an exciting adventure as one leaves the road and then dives down a steep route including a bit of a scramble to get down off the high cliffs. Navigation skills are essential here as the guidebook doesn’t exaggerate when it warns there is really only one safe way down/up. I’ve noticed an increased frequency of cairns on the route in recent years, but be prepared to find your own way if needed. A short rope might also come in handy to lift/lower a pack at one spot.

NOTE: I have only done this route as an ascent so that is how I will describe it below (reverse of the summary above.) If doing the more-common descent (EAST->WEST route), just make sure to never jump/slide down something if you are not sure it is possible to reverse the route.

Coming up a western side branch of Muley Creek Canyon, one will eventually come to a small junction. The prominent point straight ahead is the way up, but first go to the right and follow the winding wash a bit farther before sizing up the route one needs to ascend. 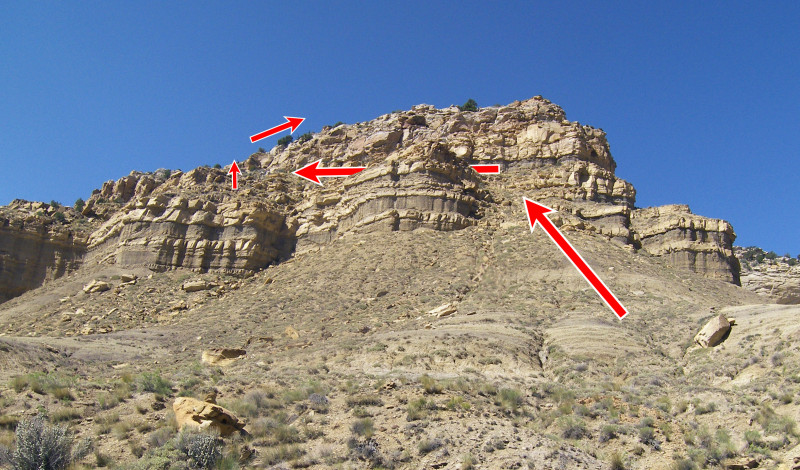 The first part of the route climbs a steep hill out of the wash. It steepens even more as one nears the cliff band. The loose dirt/scree can make for a slow go. Once at the cliff band there are 2 or 3 small ledges to ascend. Having a buddy here will make progress quicker. Otherwise one will likely need to lift the pack up each step. Nothing is terribly difficult here (or exposed), it’s just a bit awkward on the steep slope with poor footing. 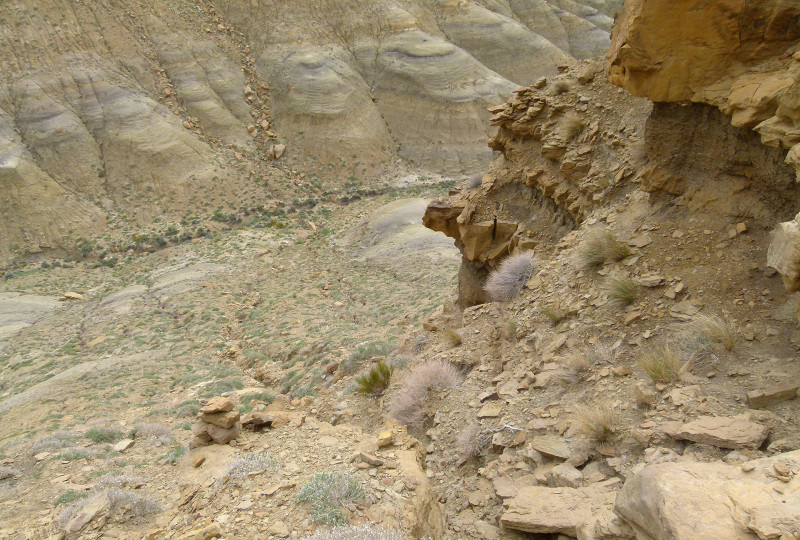 looking back down the lower slopes

Once atop this gully, move laterally to the left along relatively level ground. This ‘middle ledge’ is a nice spot to catch your breath and take in views back down over Swap Canyon and to the Henrys. 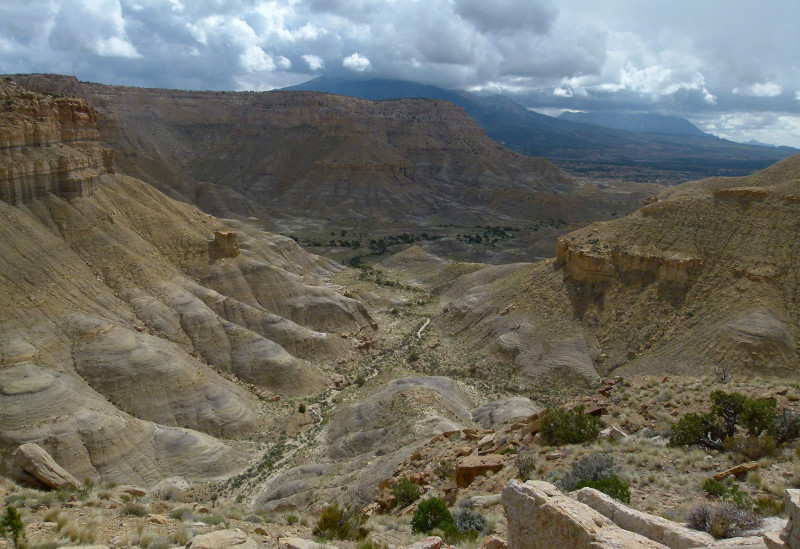 In about 50 meters or so you will come to a chute going up to the higher cliffs. This is possibly the crux of the route as one needs to scramble up this. Again, this is not truly technical, but it does require a few big and anxious steps to get up with a moderate amount of exposure. A fall here would probably not be fatal — but it could be bad. 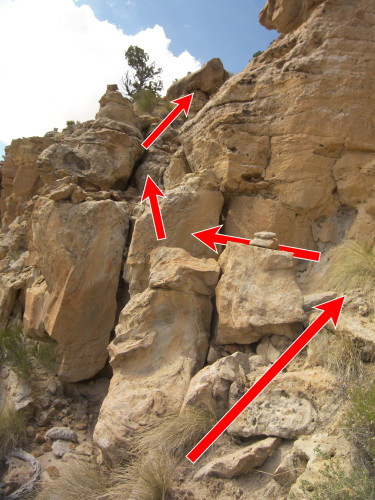 Once past the crux, be careful of loose rocks and keep moving up the chute. 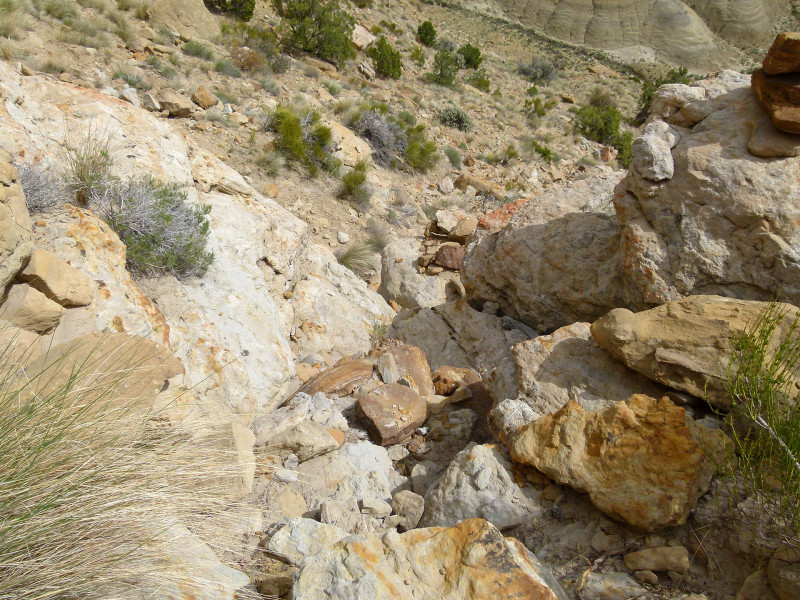 Soon the steepness will taper off a bit and it will be easier to find a route to zig-zag up the higher slopes. Keep moving up while enjoying the views behind you and across the canyon.

Once up to high ground one will enter a juniper forest. If you have a little extra time, head west about 10 minutes to the western edge of this part of the mesa and enjoy views over Swap Mesa and on to the Waterpocket Fold. 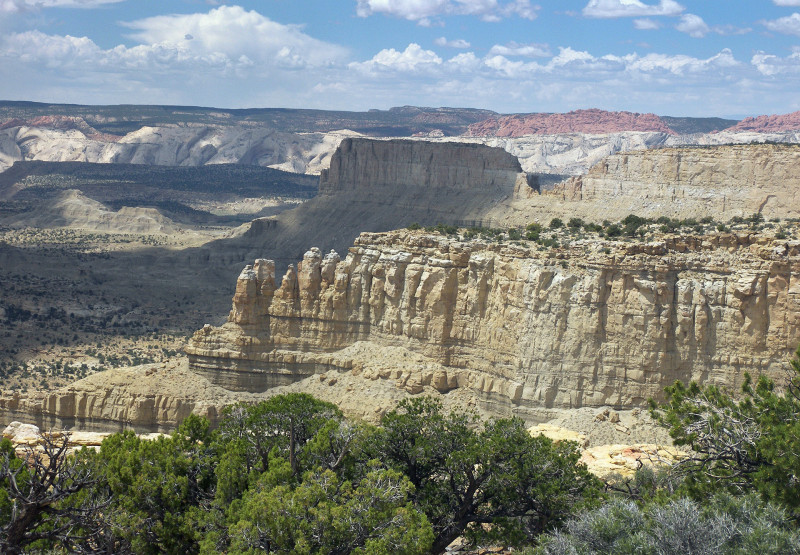 Then head N to eventually pick up the dirt road which takes one across the top of the mesa. Along the way one will come to a * and then later a water catchment system. Both of these water sources are fairly reliable in late spring.

*UPDATE: hikers have reported that the solar well was decommissioned around 2017. A new solar well can be found about 1/4 mile west of the fork in the road where the Hayduke turns south.

Eventually the dirt road takes one off the eastern end of the mesa and one can continue following the Hayduke up and into the Henry Mountains.

If headed westbound on the Hayduke one may want to check out the “Muley Mushroom” or Under Tarantula Mesa route. 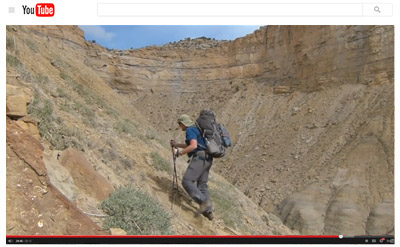 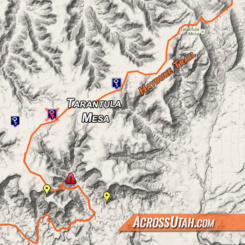 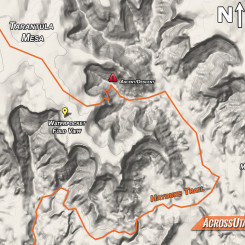 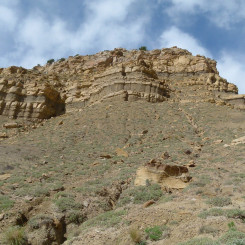 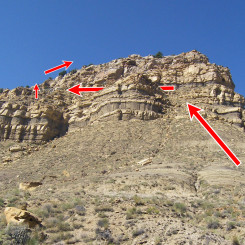 the general route up 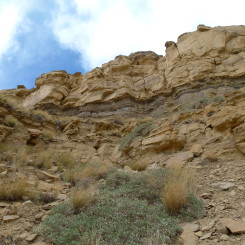 nearing top of the initial slope 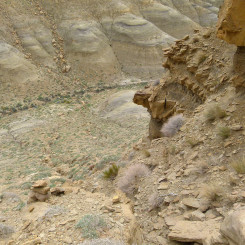 looking back down initial slope

nice views from the middle ledge 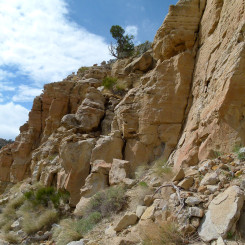 the scramble up the chute 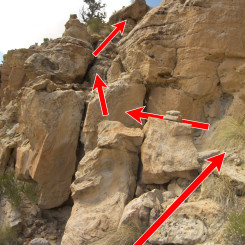 basic route up the chute 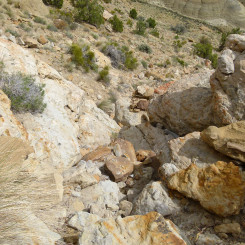 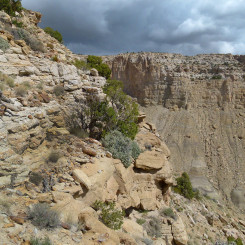 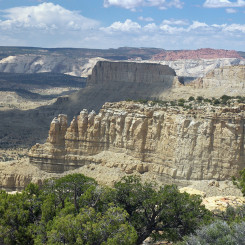 on the western edge looking toward Capitol Reef 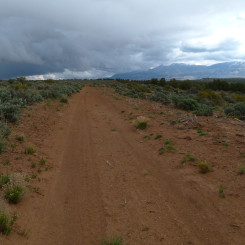 road across top of Tarantula Mesa 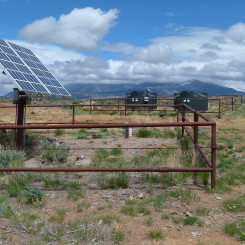 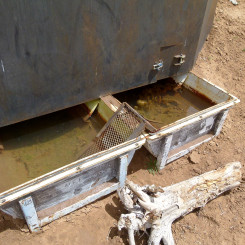 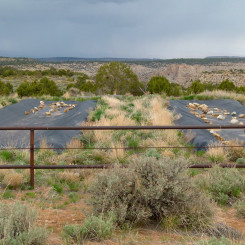 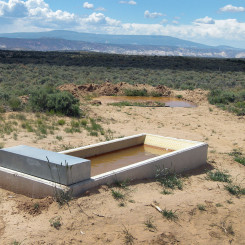