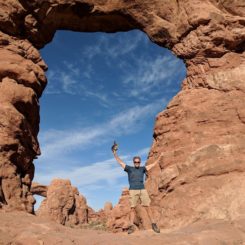 After a long delay, I’m finally ready to share my video content from this spring’s Zion to Arches Hike. Once I began wading through all my stuff I realized it was going to be a big task. With nearly 8hrs of raw footage and thousands of photos and 360-degree shots, it really was a HUGE job. Throw in some hardware and software issues and all of a sudden it’s September!

Besides the sheer volume, cutting the footage was also a challenge due to several technical issues while on the trail. I broke my main camera on Day 10 which was a real bummer. 🙁 My tripod broke soon after that. My 360-degree camera lost the ability to preview so I was shooting blind the whole time and an external microphone I took just didn’t work — and boy do I wish it had because the WIND was terrible this spring.

Despite all those issues, I still think I got some decent content. Because of that I’ve decided to do something new this time and break up the trip into a series of FOURTEEN episodes each of about 15 minutes. I know, I know… that’s a LOT of video. That means there’s even more than usual of me walking and walking and walking, telling semi-lame jokes, talking to animals, and even singing this time out for some unknown reason. And I’m not a good singer — so I apologize in advance.

I know that the new extended format will be too much content for most of my audience (my mom might be the only one to watch it all!) Therefore I will still be publishing my standard “overview” video which will cover the entire hike in less than an hour as well as my “highlight” video of about 5 minutes primarily for my Facebook friends. And of course there will also be the 360-degree immersive video for the VR enthusiasts. So many videos, so little time! 🙂 One advantage of the “episode” strategy I hope is that it should make the content more “discoverable” for users just looking for a specific region. For instance, the first installment is just about Zion, a later episode is all about the Kaiparowits Plateau, and even later there’s one focused on the Needles in Canyonlands. I hope this keeps these regions from getting “lost” in a bigger video and make the content easier to share.

The first installment of the series — The Zion Traverse — is now online and linked below. Look for a new episode each few days for the next several weeks.

Hope you enjoy and thanks for following along!

Link to the full playlist: https://goo.gl/cdC82A