Little Spring Canyon is in the Needles District of Canyonlands and near the very end of the Section 2 of the Hayduke Route. It lies between the Lower Jump and end-of-the-road Big Spring Canyon Overlook. The canyon has a fairly reliable spring in its upper end making it a great waypoint for long-distance hikers.

There are a few different options for getting in and around Little Spring Canyon:

Instead of following the by-the-book Hayduke, one can follow the wash one gully to the north. This allows one to to see The Lower Jump and the dramatic views along Lower Salt Creek Canyon without backtracking. 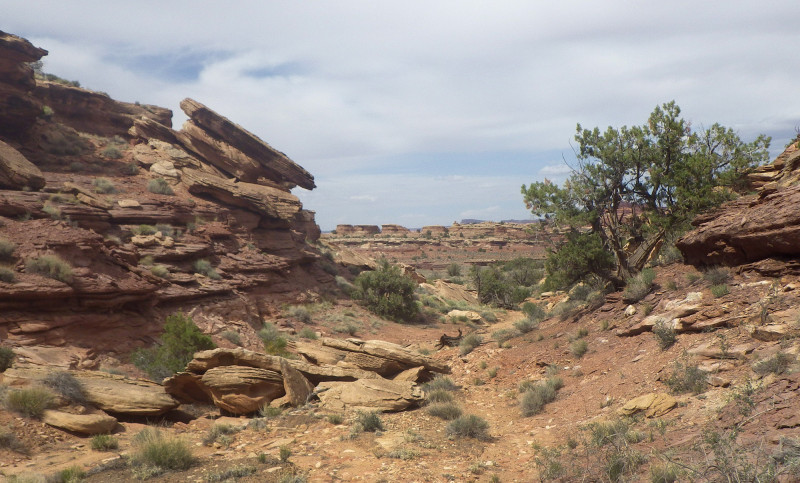 Getting in or out of Little Spring Canyon right near the spring’s source requires climbing up a wall with an assist of a stack of rocks. This can be a challenge for solo backpackers (especially the short ones or anyone averse to falling!)

However, a bypass here is possible. If headed west, just follow the southern/eastern rim of the canyon instead of climbing down. One can see the rim here on the left side of the canyon: 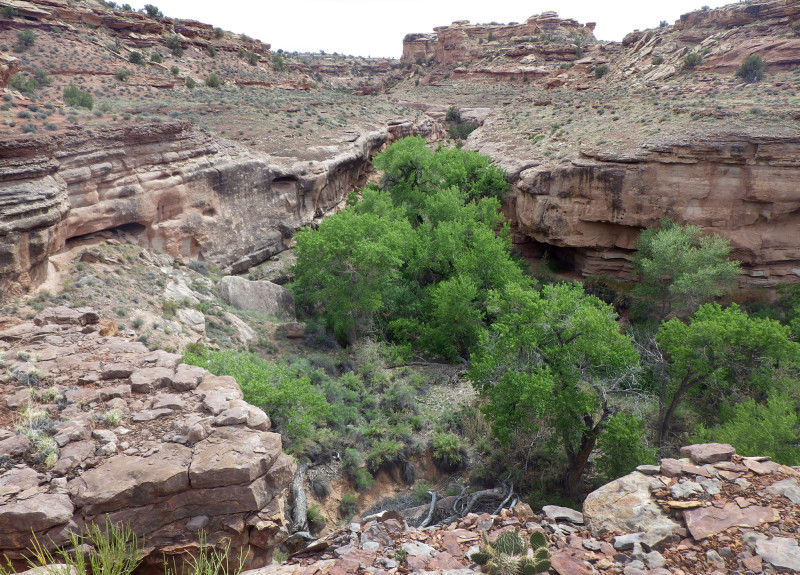 Follow the rim for just over 1/4 mile where a branch of the canyon turns southeast. Here it is possible to re-enter the canyon right near the junction of the two branches.  One needs to go up the western branch to continue on toward the road. However, this is NOT possible in the main watercourse because of a dryfall. But, just down the southern/eastern branch is an easy bypass to connect as needed. Before doing that though, loop back to the spring if necessary and see the arch along the northern/western wall on the way. 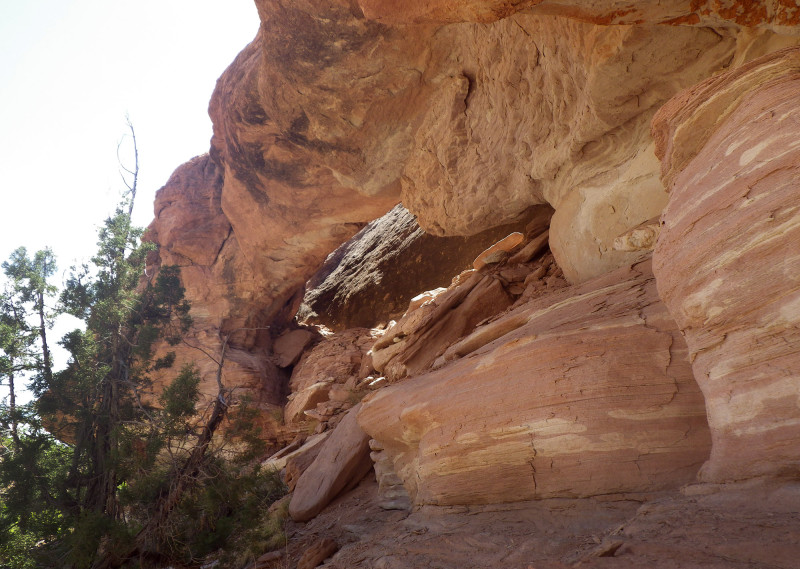 *Note: I have not personally done this route, but I have read that it’s possible with some effort and look forward to trying it in the future.

The lower part of Big Spring Canyon evidently has a few big drops which need to be bypassed on the southern talus. Once one gets father up Big Spring Canyon they will be greeted with seasonal flowing water and a bunch of cottonwoods. There will likely be a big pool under the major drop. To get past this big drop, one will need to backtrack about 200 yards and find a route up the eastern wall. It requires a 10′ climb which is likely to be marked with cairns and thanks to several good ‘steps’ is easier than it looks.

Walk the rim of the canyon to the dry wash above. Here you can re-connect with the Hayduke on the park trail towards Confluence Overlook.  Hike up to the viewpoint first if you really want to touch pavement and see a bunch of tourists taking pictures just outside their cars. 🙂

Another reason this route is enticing it that some of it is outside the No-Camping Zone enforced by the park, thus making it a rare place to camp near water in this area. Note that a Needles North backcountry permit is still required and it is periodically off-limits due to desert bighorn mating season. 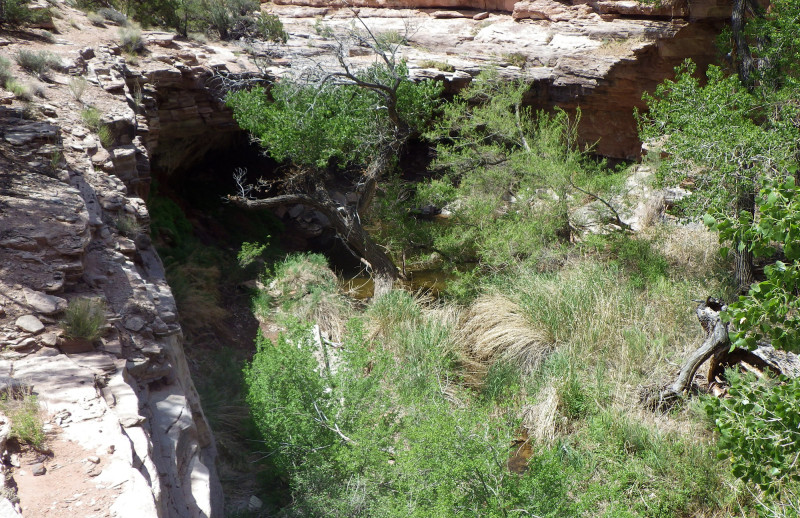 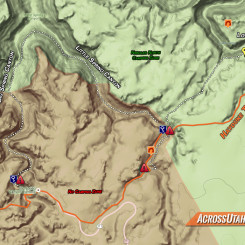 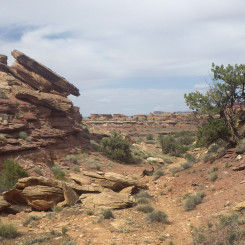 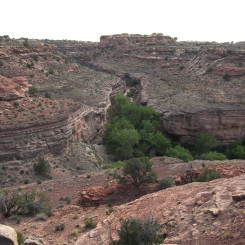 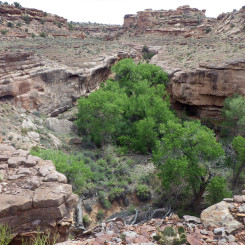 the spot to climb out/in near the spring 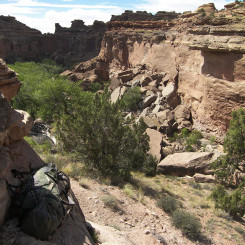 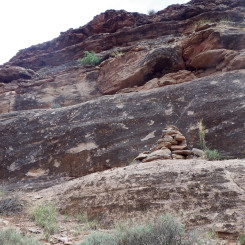 looking up at the climb

the flowing stream near spring’s source 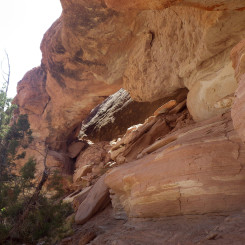 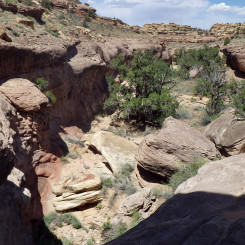 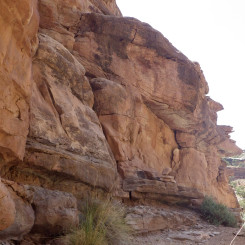 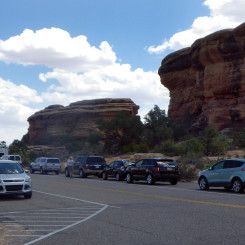