Day-by-day report of my Bryce to Little Death Hollow Hike (aka the hike formerly known as Bryce to Moab.) I updated this page via short reports while on the trail and have since augmented the report with more detail and photos.

I got to Camp Spring early in morning which is right off the Smoky Mountain Road. The spring had a strong flow, but a metallic taste.

I continued down Collet Canyon having to pass through a cow gate to continue. Then I was surprised at one bend to see huge slabs of snow and ice — complete with an ice bridge! It was a sight hard to believe in late April. 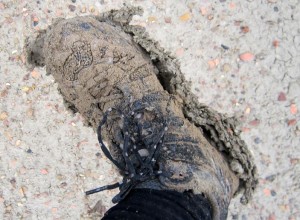 Soon after that it began to rain. It made it even a muddier walk. Soon I was slippin’ and a slidin’ my way down the canyon. The clay would stick to my boots, adding a few pounds per foot. I would clean it off, but it would be back within a matter of minutes. It never really rained that hard, but it was a steady drizzle the whole way. It made me less concerned about my water situation as potholes quickly formed everywhere.

There are colorful rocks in this canyon. Yellow, green and red. With some bends there were entire cliffs of the colorful rocks. The canyon cuts down through several bands of coal as well.

The sun came out around 4pm; Mr. Shadow rejoined me about the same time. He doesn’t seem to hang out with me much when it’s raining. 🙂 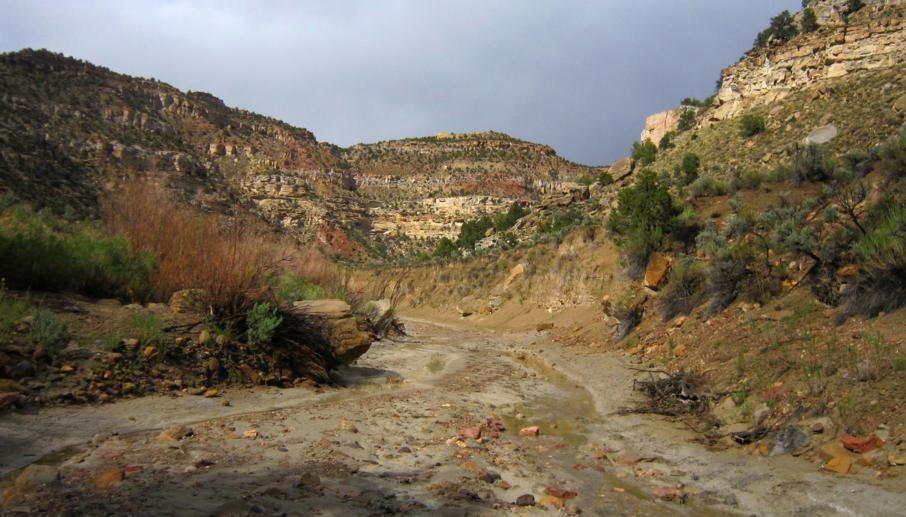 Below Sarah Ann Canyon, Collet Canyon began to slot up. It was never very deep at all, but it included some really cool overhangs. Kinda like a flat-roofed “subway” like canyon if you will. This continued for the next mile or so.

Below Carcass Canyon, Collet Canyon really opens up wide. Of course this means the return of the cows as well. Got to see dramatic light on the Straight Cliffs with huge storm clouds to the east as I looked for a camp.

Set up camp near a feature called “slickrock water”. Had to shelter my tent from very strong winds at camp. 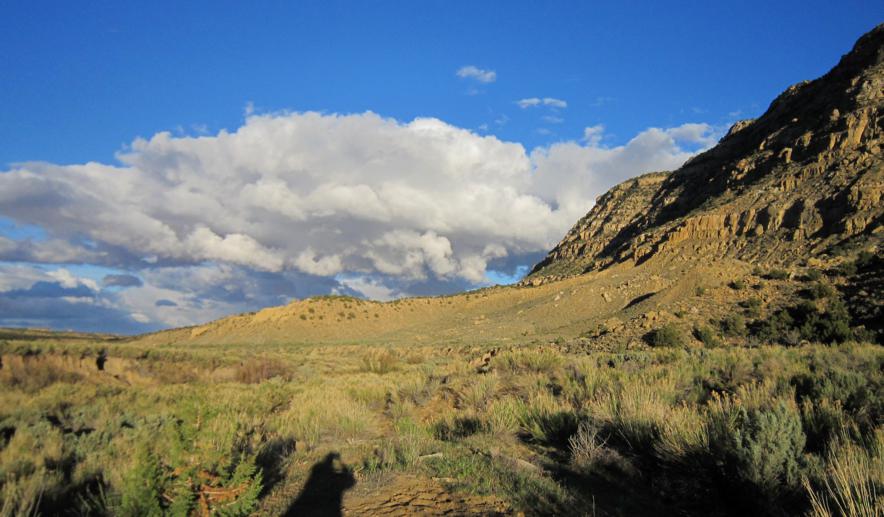 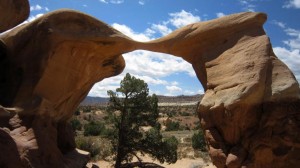 I made it over a small pass and then down and around the plateau to Devil’s Garden where I had my 1st cache. Good thing it was still there as I was completely out of food; this is my first trip ever that at any point I’ve been completely out of food. I changed my gear around and then a nice couple agreed to dispose of my trash for me.

From there I headed cross country through colorful hills toward Harris Wash. From the high point I was excited to get a cell phone connection (Verizon!)

From the Harris Wash TH area I set out up toward Red Breaks. It was over a mile of tedious sand to get to the slot part of canyon. I was happy to find water there as well, though it was once again pretty cow’d up. Once I came to a dryfall I had to backtrack a bit to climb up a bypass.

Past this point the canyon was really cool, but a nightmare with a newly refilled big pack. I had to lift the pack up over 6′ to 8′ chockstones multiple times — then climb up myself. This is definitely not a canyon made for a adventurer with a big pack, camera side-saddle and two trekking poles! 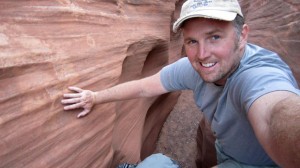 The main fork took much longer than I planned. Late in the day I was dismayed that there was not an easy way out of the canyon to camp. Again — not a tough task for a day hiker, but getting up the slanted and sandy slickrock to the plateau above was tough with the big pack. Getting started friction walking up the initial slope was difficult.

I camped above the junction with the the East Fork.

Note: I might take a break from my blog for a couple of days to catch up.

Day 10 — Sand Slides and a Looong Little Canyon
Got up and checked out the West Fork of Red Breaks. Good slot, but shallow and not as impressive as I’d imagined. It too had several chockstones which had to be negotiated. I have a feeling the best part of the canyon was up farther than I ventured. I put myself on a 30 minutes up and 30 minutes back schedule because I still had a big day ahead of me. 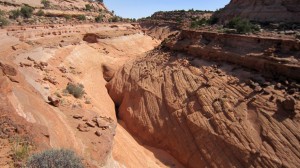 Back at my camp spot, I had to walk the east rim a ways before finding a way down into the canyon. From this point on it was a slickrock paradise. I love this kind of terrain, but wouldn’t want to be here when it’s 100 degrees as there is absolutely zero shade!

I navigated up to the feature called the ‘volcano’. It’s the top of a slickrock peak which has cratered out and filled with orange sand — really cool. It was a little farther south than I had noted on my map, so I wasted a bit of time finding it. It’s much larger than I had imagined — I wish I had a picture with a person in it for reference. 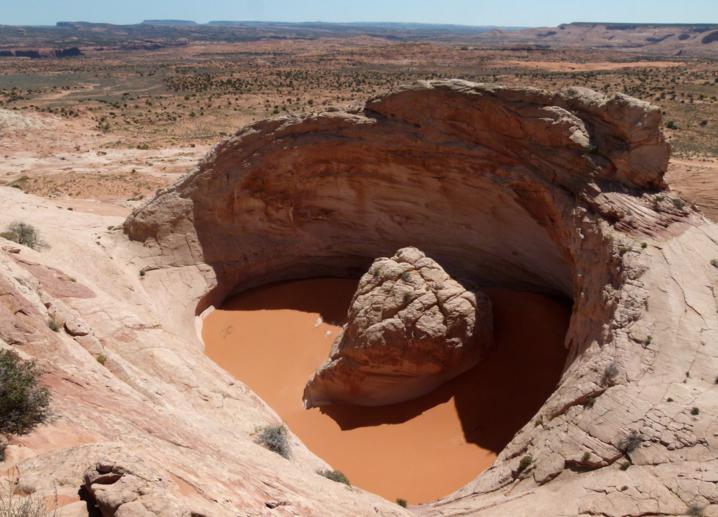 Then I headed east through the dunes to the edge of the Escalante River Canyon. The plan was to get down and across the river, then up Little Death Hollow to the road where I would meet my parents for a dinner and then spend some quality time R&R for the first part of tomorrow. It was a long ways to go. With a sore leg and a painful blister I knew I’d have to push through the pain to not keep my parents waiting. 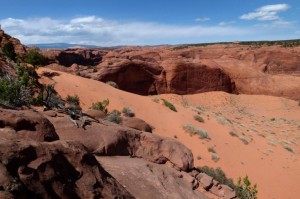 Unfortunately, when I got to the edge of the canyon, there was a problem, there was no way down! There are only a couple of places to safely descend the 400′ walls down to the river along this stretch, and evidently I had incorrectly noted the location of the ‘sand slide’ on my map. After a little scouting, I found the correct spot farther south. Even once found, it was tricky to find how to access the dune. One must go down the slickrock away from the dune, then follow a ramp back up and sideways to reach the sand. From there, it was a long, slide down the huge dune to the river valley below.

Once down, I had to get back up river a few miles — a task made more difficult by a swollen river and the ever-brushy banks of the Escalante. The first spot I tried to cross was nearly waist-deep on me; thus I kept going to find a better spot. When the the river was wider, it was only knee-deep and safe to cross. Unfortunately I had to cross three times because the river kept getting pinched against the walls of the canyon. Two other spots I climbed high above the river in lieu of making another crossing.

Then it was up Horse Canyon for about 45 minutes to the mouth of Little Death Hollow. 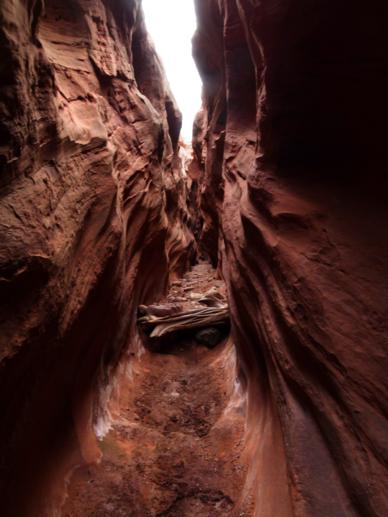 By the time I got to the bottom of Little Death Hollow Canyon I was already ‘late’ for the rendezvous with my parents.

As scenic as the canyon was, I gave it everything I could to push my way through this incredibly long and winding corridor of a slot canyon. I could not believe how it went on and on… and on!

There were boulders to climb, dead cows to pass, water slicks to avoid.

I was utterly exhausted, but a rare open space gave me a chance to check my GPS — I was still 3 miles line-of-sight away, which probably meant about 5-6 miles of walking in a twisting canyon like this!

As it got dark, it got spooky. It also got treacherous hiking over the cobblestones with limited vision. I slowed way down. 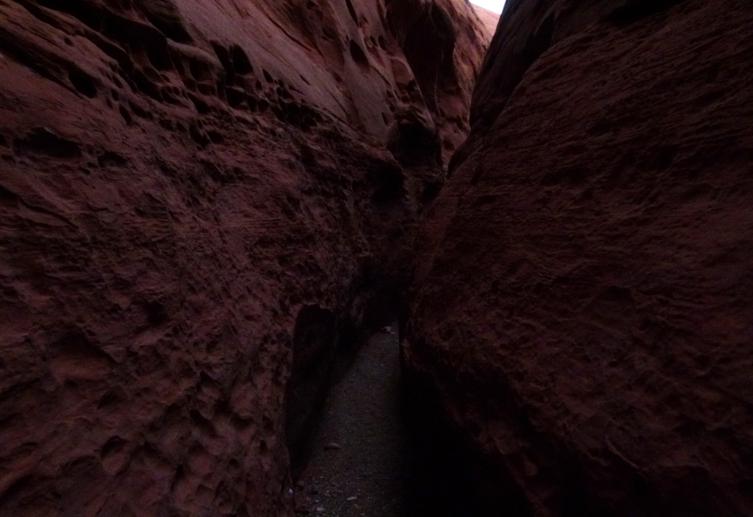 I pushed on… into the night… I pushed on with a headlamp. I was near delirious; it was one of the most draining experiences of my life. But, when I got to open country and I saw auto headlights flashing in the distance… I knew all was good. Within 45 minutes I joined my parents and we had a great, belated, meal.