In Section 6 of the official Hayduke Route, after leaving Lower Muley Twist in Capitol Reef, hikers climb up the Red Slide and then over the the saddle/pass to drop into the the upper reaches of Middle Moody Canyon. From there it’s about 10 miles down to join Moody Canyon (main fork) and another 3 miles to meet the Escalante River. Then it’s about a mile down river to the junction with East Moody Canyon, before leaving the Moodys behind to continue the long trek down the river corridor to Coyote Gulch. This page describes the the section through the Moody Canyons and mentions a few alternates for those so inclined.

It’s a great view from atop the saddle/pass which separates Deer Point from the southern portion of the Waterpocket Fold. This distinctive-looking pass is visible for miles in every direction and is easy to discern from far-away places like the Henry Mountains or Fiftymile Mountain in the opposite direction.  Here’s a view of the pass from south of the official route. Deer Point is on the left and the Hayduke passes just to the right of no-name butte in the middle of the “notch” on the horizon: 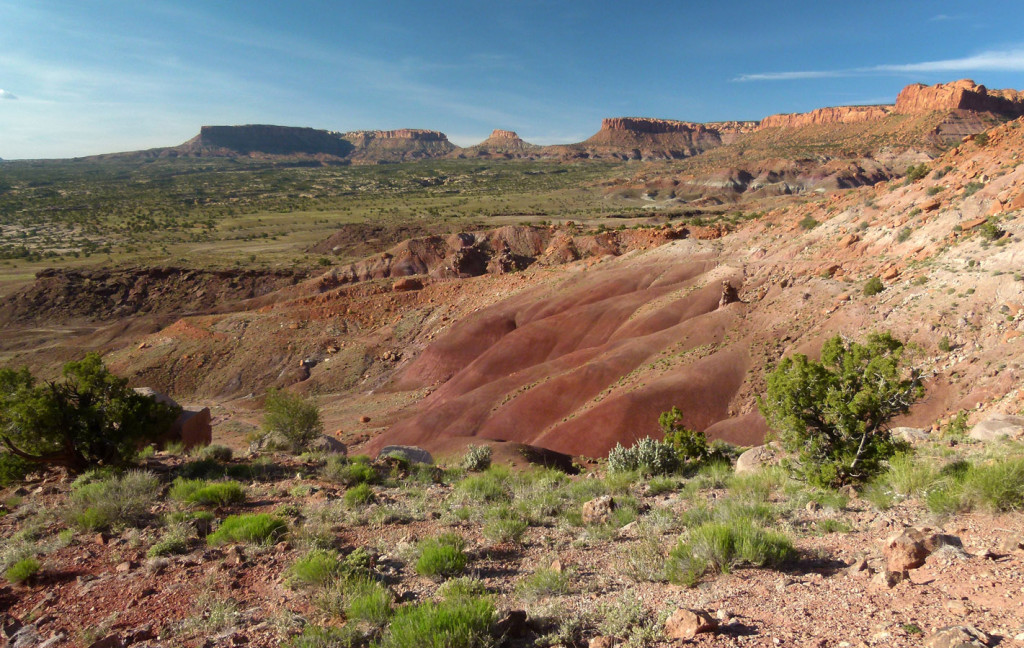 NOTE: This northernmost portion of this area was a part of Grand Staircase-Escalante National Monument before being excised along with most of the Circle Cliffs region due to the controversial monument reduction in 2017. 🙁

As one drops into the canyon system, the interesting geological formation known as the “Purple Hills” can be seen in the distance

Headed down the canyon soon becomes entrenched with chunky rock walls, though it remains fairly wide open. and walking is easy and fast in the wash.

As one heads generally SW, there will be several opportunities to escape the canyon. After about 4 miles two side canyons enter from the left (east) about 1/4 apart of one another. I haven’t explored the first, but the second one can be used to access then bench to the east. The canyon is a bit of a scramble, but nothing crazy. One may use this route if coming down FROM the “Above Red Slide” alternate or to get TO the saddle which drops into East Moody Canyon as another alternate.

In about another 3/4 miles down Middle Moody is where a route enters on the right (north) side of the canyon connecting to the end-of-the-line 4×4 road on the bench above. The small parking area can’t bee seen from below, but one is likely to see a large rock cairn marking the correct spot. It’s also possible one might see some day hikers in the area — but this is probably less likely. That’s possibly the best thing about this section of the hike — the remoteness of the area and the very real possibility to not any other people for days.

Continuing down canyon the walls close in somewhat and huge boulders litter the streambed. I encountered intermittent water throughout this section, though it’s likely not here year-round. There’s also cattle in the general area, so as always — filter appropriately. 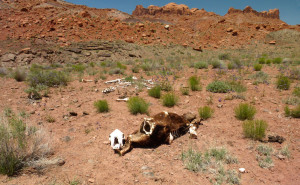 Soon the canyon opens up and one can see the higher red walls of Wingate sandstone.

Walking is pretty easy down the wash and the next several miles should pass quickly and one soon reaches the junction with Moody Canyon (main fork.) Old maps show a spring here and one is likely to find a substantial outbreak of surface water just below this junction. 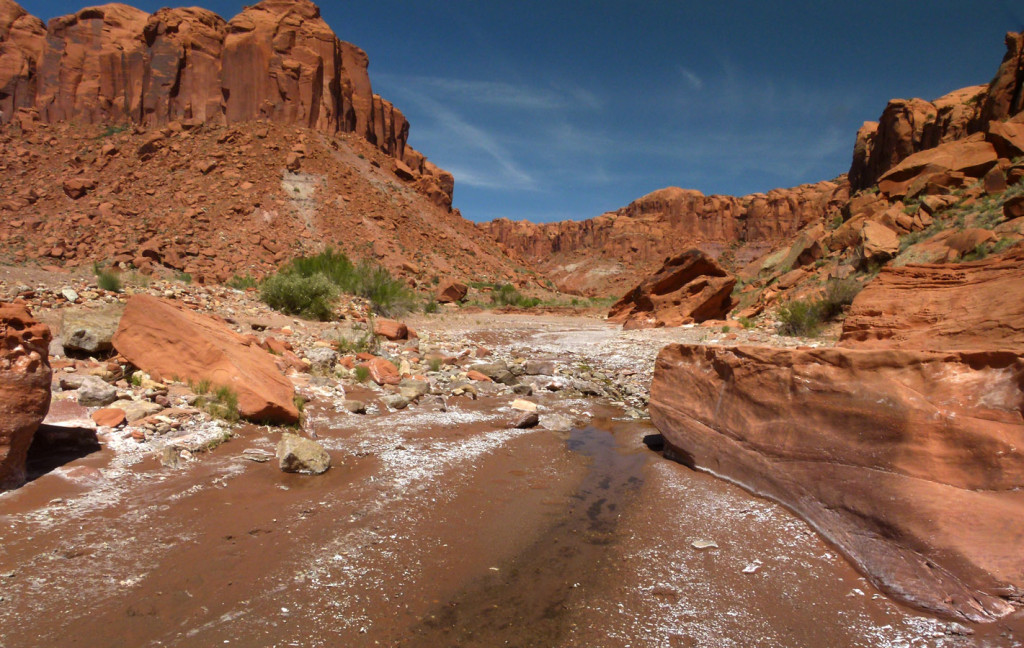 Continuing down canyon the walls rise higher and higher. Chunks of red rock have collapsed and frequently block the main path, but they never create any type of real barrier to progress. It’s a pretty walk and after just a few miles one arrives at the Escalante River: 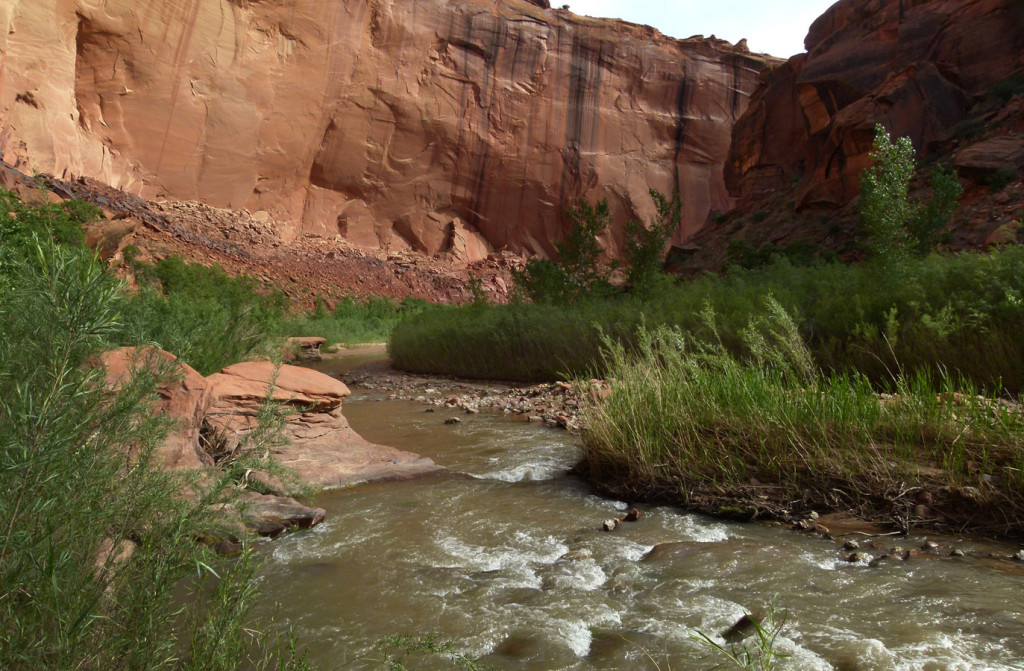 Heading downstream can be a real battle with brush along the bank. For this initial stretch one might find it easier to simply walk right down the middle of the knee-deep river. After a short distance it’s easy to get back up on the east-side bank and from that point it’s  a nice walk along the river all the way down to East Moody Canyon.

There’s good camping in this general area and the lower end of the the tributary beckons to be explored. A quick diversion up the canyon will give a glimpse of arguably the best part of the canyon and possibly dissipate any regret over not taking the East Moody Alternate. Maybe. 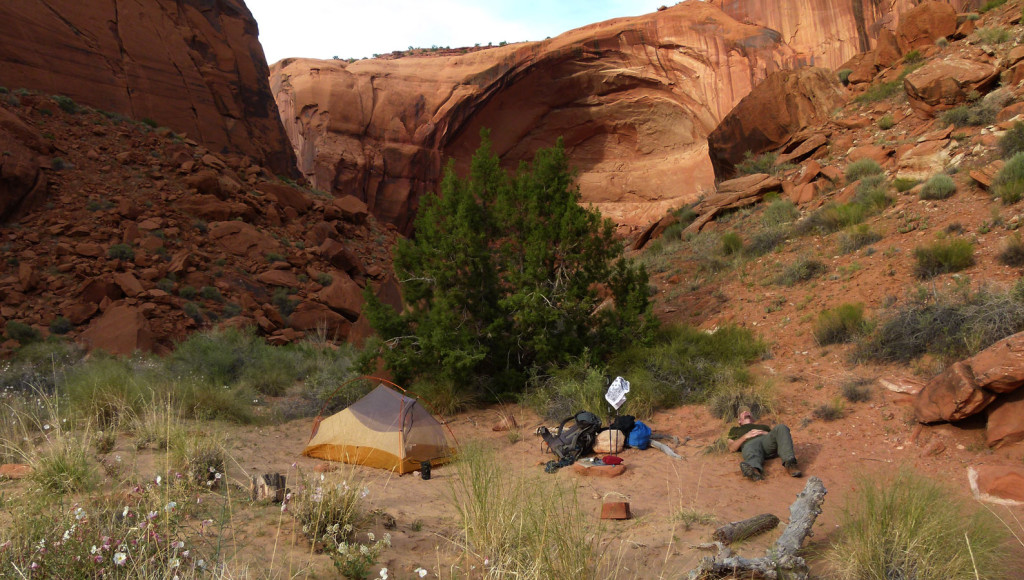 From here Haydukers continue the long trek down the river corridor en route to Coyote Gulch. 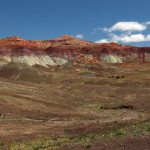 Jct. Middle Moody and the branch to the east (right) 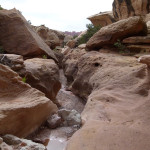 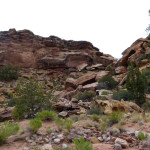 Middle Moody access point to climb up to road’s end 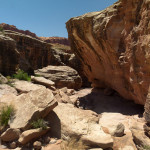 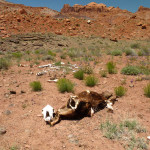 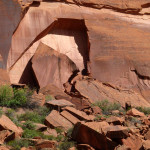 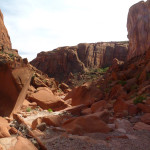 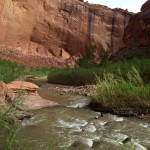 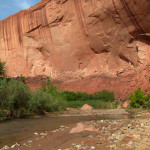 Big bend on the Escalante between Moody and East Moody 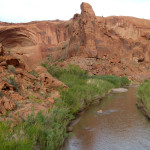 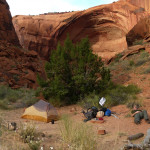 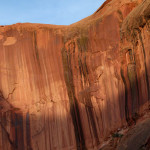 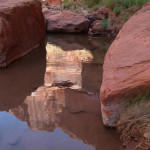 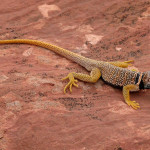