As one researches the Henry Mountains, this factoid will frequently pop up:

“The Henry Mountains — the last mountain range to be named/explored/mapped in the United States.”

Coincidentally the Henrys might also be the portion of the Hayduke Trail that gets the least amount of attention. This is not for a lack of beauty, but instead possibly because many hikers try to power over the range as quickly as possible due to visiting in a less-than-ideal season and/or carrying inadequate gear for an extended stay at high elevations. Rising over 11’000 feet the Henry Mountains are literally the high point of the Hayduke. One’s level of adventure through the mountains will likely depend on which route one takes and most definitely… the weather.

Looking southwesterly from Highway 95 one can get their bearings for the Henrys:

The official Hayduke climbs the lower flanks to the Crescent Creek Junction area. From here the route zags northwest and steepens following the road through the Granite Ridges area and eventually to Bull Creek Pass. Here the route leaves the road and traverses the South Summit Ridge of Mt. Ellen, before dropping down the far side along South Creek Ridge headed toward Tarantula Mesa.

Instead of taking the official route up the lower eastern flanks, it’s possible to go a bit south on various slightly longer routes and see some cool sights such as: Little Egypt, Lower Crescent Creek Mining Ruins, Crescent Creek Narrows (Lycleed Spring). All of these routes converge on the road just east/downhill from Crescent Creek Jct.

Once up at the Crescent Creek Jct. there are roads running in many directions.  As previously mentioned the official route heads northwest to Bull Creek Pass passing Wickup Pass along the way.  However, from this same junction one could also follow the road which circumnavigates Mount Ellen on the southern side. This option might be more appealing for those not planning to hike the summit ridge and concerned about snow depths on the northern slopes. If snow is a real concern, it’s also possible to take the Low Elevation Henrys/Raggy Canyon Alternate which goes over Pennellen Pass.

NOTE: if considering the direct route up Crescent Canyon to the southern summit ridge from this area… don’t do it! Much of the area west of the junction is part of a large mining operation on private land and evidently they do not care for trespassers.

Whichever route one takes, the views really begin to shape up as one gains elevation. Behind to the east are incredible views back over the Dirty Devil drainage and on to the Canyonlands region:

Hikers on the official route and at Bull Creek Pass should leave the road and continue up along the summit ridge to the south. Or, they may choose to stay on the road for what’s likely to be a quicker way down and around to South Creek Ridge and re-connect with the official route. Though the weather may dictate quick travel through this area, walking the summit ridge is an amazing experience and definitely worth the extra time/effort if possible.  The 360-degree views from the top are truly incredible. From here it’s nearly possible to see the entire Waterpocket Fold in Capitol Reef in one sweeping view. If not doing the official route south, maybe consider doing a quick out-and-back along the trail to the North Summit Ridge which is technically the high point of the range.

On the South Creek Ridge the official route crosses the road and continues cross-country as it quickly drops down the western flanks toward the Sweetwater Creek drainage. When I was here in 2009 I found no water — even at the spring marked on maps. I did however run into a herd of bison! The Henry Mountain are home to one of only three remaining free-range bison herds in the U.S. (in addition to Yellowstone and Wind Cave National Parks.) It’s not common to see them, but be on the lookout and you might get lucky.

At the bottom of Sweetwater drainage the official route re-connects with the road and quickly heads out toward Tarantula Mesa. 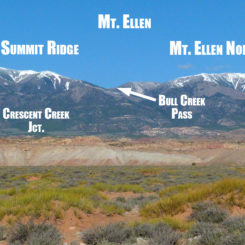 Overview from near Hwy 95 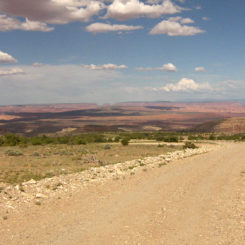 fire damage along the road 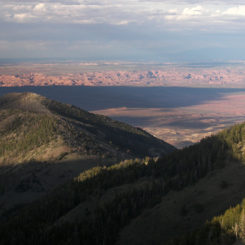 view back toward Dirty Devil 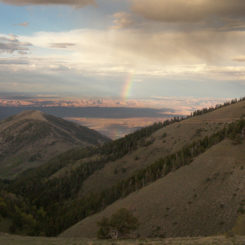 rainbow over the desert 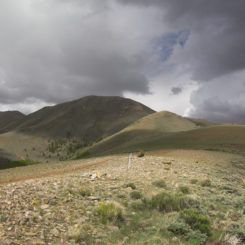 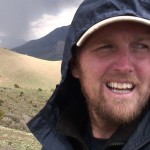 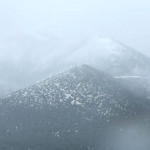 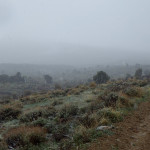