From atop Paradise Canyon, it’s a long road walk to Grosvenor Arch to finish Section 7 of the official Hayduke Route. From there, after a bit more road-walking, the route descends the impressive, but somewhat challenging Round Valley Draw, before continuing down Hackberry Canyon — the upper portion which is sandy and always dry.

This is a fine route, but if one wants a quicker way they might want to consider this alternate via Fourmile Hollow and Wahweap Canyon. This alternate might not be as scenic overall, but has many things in its favor:

If this sounds appealing, here is the description for those heading from east to west:

Leave the main road and official Hayduke via the gate at the junction to Fourmile Water. From there it’s less than a mile to where the side road drops down to the steambed and there’s an old line shack and corral. The spring is officially nearby, but I found it to be pretty mucked up by cattle and actually preferred the water downstream.

Headed downstream the banks become extremely overgrown with brush and one might find it easier to simply walk down the stream itself which is not likely to be more than a few inches deep. A little farther down the brush subsides a bit an there are few cascades tinted orange by mineral content in the water.

I’ve read there are some archaeological sites in this general area — but I’ve never seen any. After nearly 3.5 miles down the canyon one comes to the junction with Tommy Canyon where things open up even more.

Headed down Tommy the pace quickens some as the canyon widens up. There are a few bends which can be cut with some really cool big old-growth cottonwoods. After about 4 miles down Tommy, one arrives at the Junction with Wahweap Canyon.

Wahweap Canyon is even more open with tall walls rising on both sides. There may or may not be water flowing depending on the season. If there after a recent storm there is a good chance the water will be murky and gray — but it’s still OK after filtering. The lower part of Wahweap is known for producing large floods during monsoon season as the catch-basin upstream is huge. Luckily the wash is really wide with plenty of high ground nearby. I witnessed a small flood there after a spring storm in May of 2015. 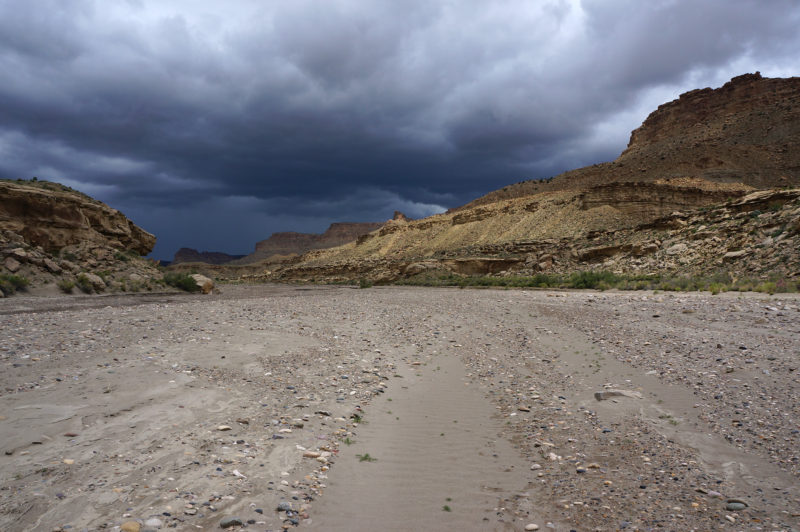 After heading down Wahweap for about 6 miles, one should turn right/west and head up dry Chynoweth Canyon.

NOTE: from here one could also continue down canyon to see the amazing Wahweap Hoodoos and then loop back to connect with this alternate. BUT…  doing so would add about 13 miles and thus the hoodoos are probably better visited as a day hike on a separate trip.

In about 1/4 mile up Chynoweth Canyon one wants to stay left at a junction. From this point up many boulders will litter the streambed making progress a bit of a scramble. Just over a mile up canyon there is a major dryfall. Before getting too close, ascend the southern wall and then move laterally to get past the obstacle.

About a 1/4 above the dryall is a good spring on the right which drips into a tank. I refer to it as “Dead Mouse Spring” after my first visit in 2006 when I found a poor dead mouse floating in the tank. The mossy overhang behind the spring could make for a good spot to relax on a hot day. 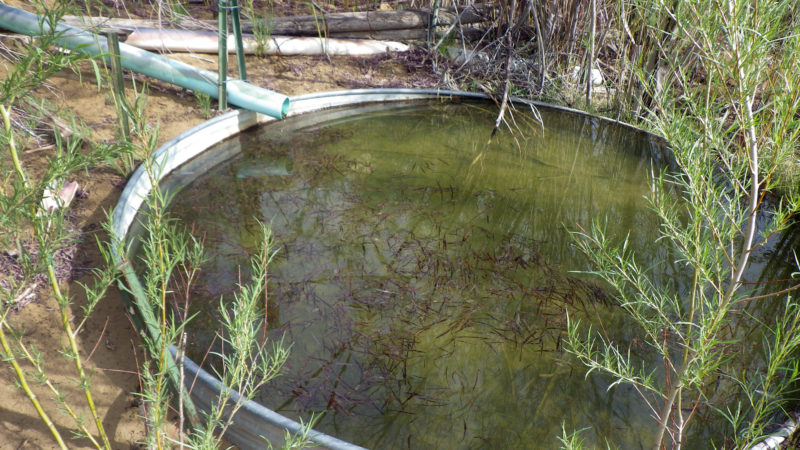 Directly south of the spring there’s a way up to the bench where one will find a road. Though it’s possible to continue directly up the canyon, I actually prefer following the road here across Jack Riggs Bench. After doing both routes on different trips, the road seemed quicker than the slightly-shorter route up the canyon/wash.

Headed SSW on the road for a little over 2 miles to get to a junction. Here one wants to go right, but the road to the left descends off the bench to the Blue Cove area. A short walk south of the road leads to a view of the area. 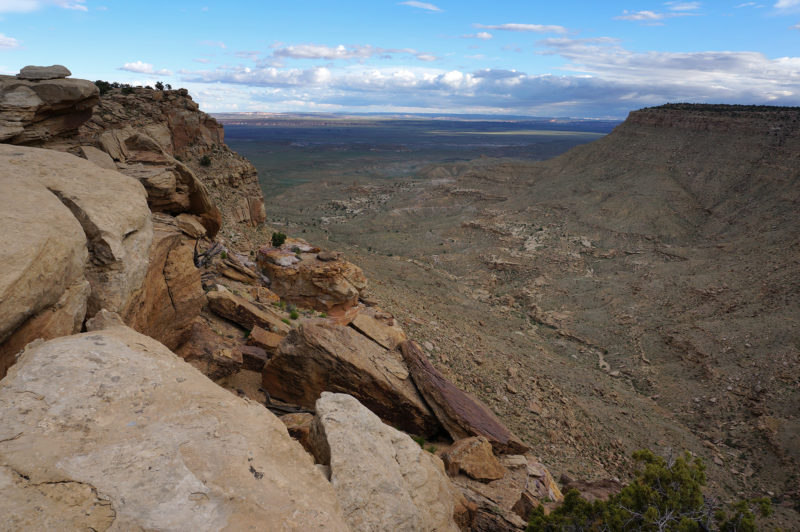 Headed westward one rounds Coyote Point while walking along the the infrequently-traveled road. 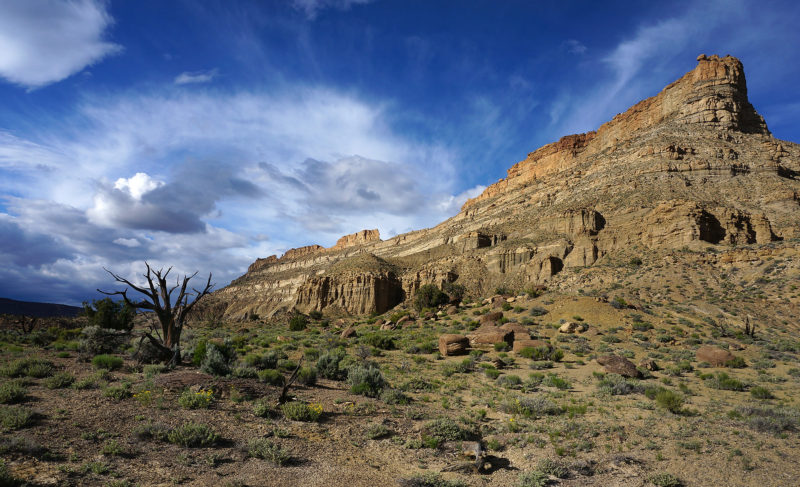 After about 2.5 miles the road drops down into a side-fork of Coyote Canyon. One could save a bit of mileage here by leaving the road and going down the canyon to connect to the left fork and take that back up to the road — but it’s a pretty tedious way to save about 1/2 mile, so just following the road might be the easiest way to go. A little farther up a shortcut across the Main Fork might be prudent however where the road swings way to the north.

Coyote Canyon is likely to be completely dry. However, if one is in need of water there may be a few stock ponds farther west on the Brigham Plains area. The upper reaches of the Left Fork could possibly have some potholes.

In the final stretch the route climbs briefly as it encounters the Cockscomb Formation. Once at the top the views are amazing before the road steeply descends into Cottonwood Wash. Ahead one can see Yellow Rock, the mouth of Hackberry Canyon, and Mollies Nipple in the distance.

In just over a mile one will be at the bottom at at the Hackberry Trailhead and officially back on the Hayduke Trail. The official route heads south down the wash, but I really recommend going up to Yellow Rock first as a diversion or take the Yellow Rock High Route to the the Paria. 👍 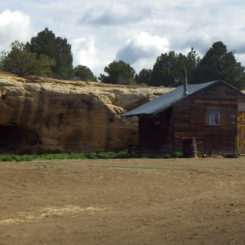 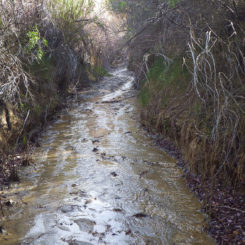 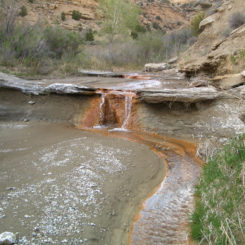 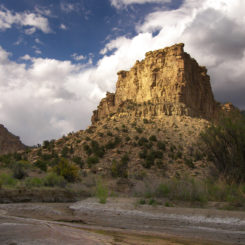 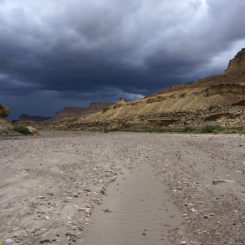 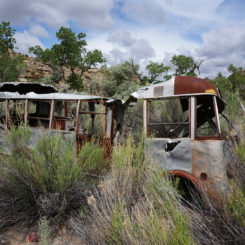 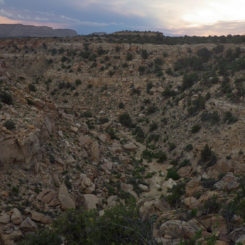 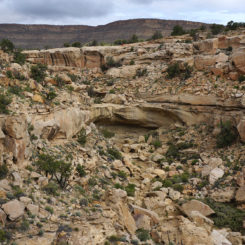 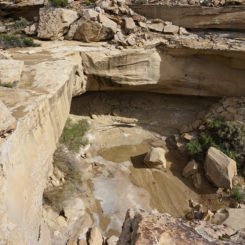 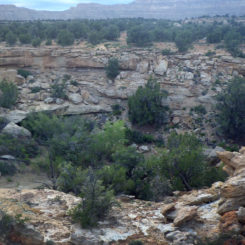 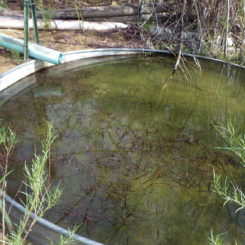 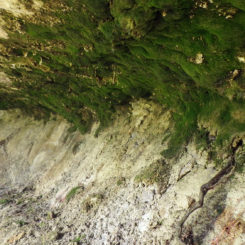 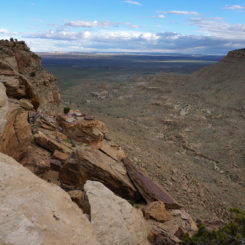 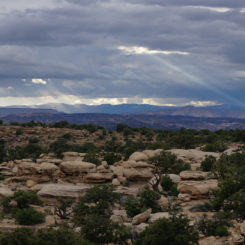 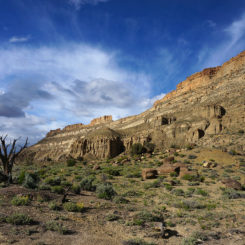 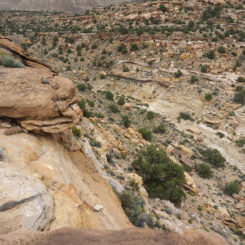 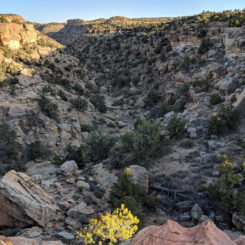