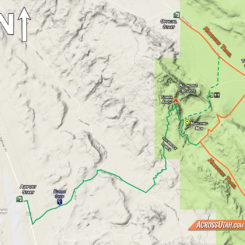 The official start spot of the Hayduke Trail is seemingly arbitrary and definitely out of the way. Since getting to the northwestern border of Arches National Park via the Salt Valley Road can be a logistical challenge, many Haydukers opt for an alternate start (or end) via Devils Garden or the Canyonlands Airfield as discussed below. Any of these routes can be combined with a short alternate through the Klondike Bluffs to see Tower Arch which adds a bit of excitement to the otherwise fairly dull official start. Jump to the bottom of this page to read about how to include such an alternate with the official starting point.

Beginning at (or near) the Canyonlands Airfield has many logistically advantages:

After carefully crossing the highway, spot the Klondike Bluffs on the horizon to the east. Just to the right should be a drainage filled with green brush (depending on season). That’s Burro Seep and it should be one’s initial landmark destination.

looking east from near the airport (click to see larger)

Though it’s likely possible to jump the fence here and make a beeline for Burro Seep, I chose to follow the frontage road south for a short distance, before turning east where the train tracks cut through. From here it’s a straight line to the seep with the Klondike Bluffs directly behind: 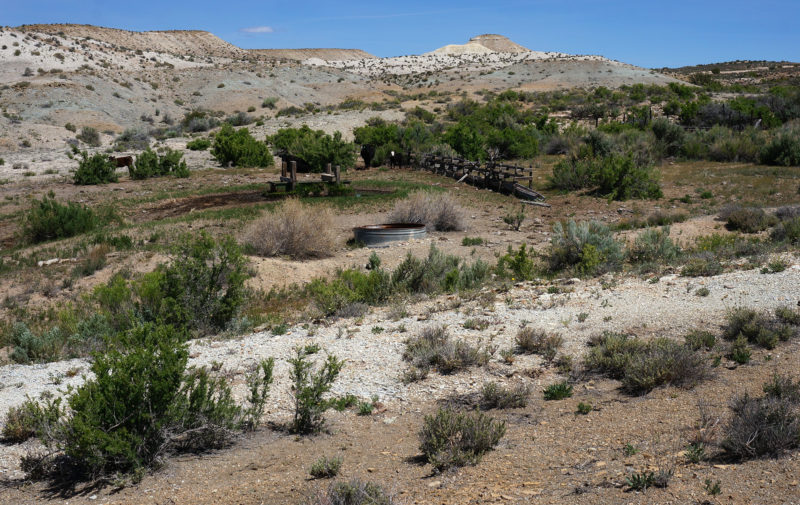 Just up from the seep one will intersect the well-traveled gravel road heading back to the Klondike Bluffs staging area the network of bike and 4×4 routes west of Arches.

Though a fairly obvious cross-county route looks possible on the map, I opted to head south along the Little Valley Road and then turn east on the rougher Copper Ridge Road which runs to the park’s boundary. This is likely the longer way, but the navigation is simple and makes for fast, mindless walking. 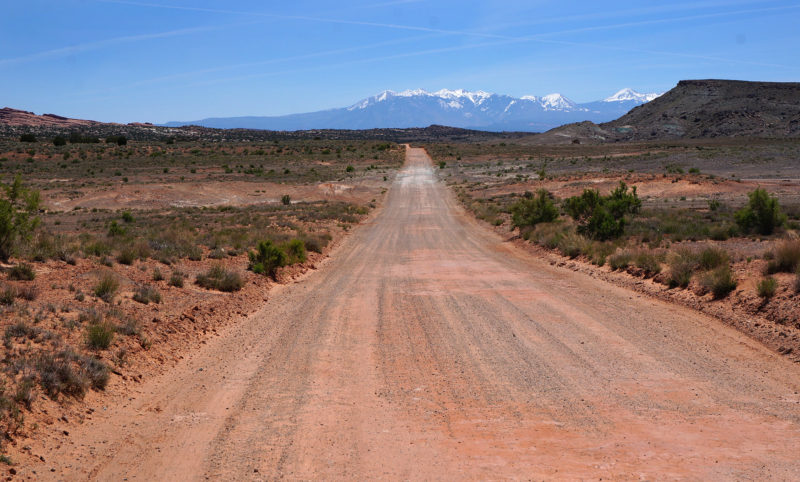 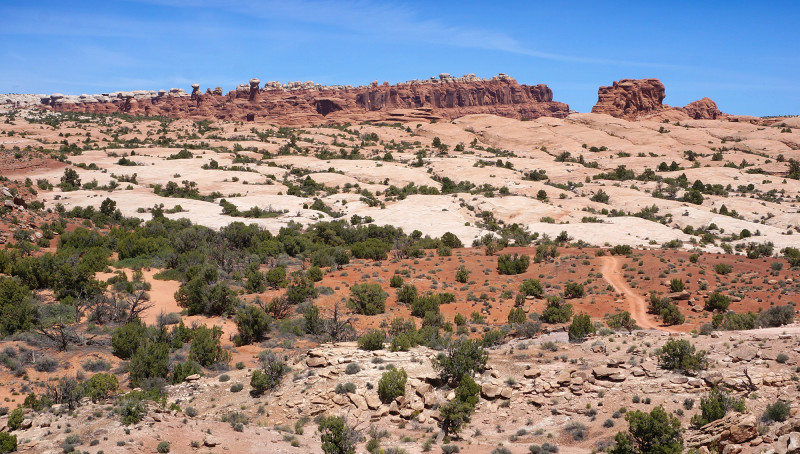 Once down in the wash near the park boundary, the road heads south, but hikers heading for Klondike Bluffs will want to head NE up the sandstone. The fins are not too rough in this area, so within no time at all one should be over the sandstone and back to the sand where one quickly intersects the Jeep road and can see Tower Arch ahead. 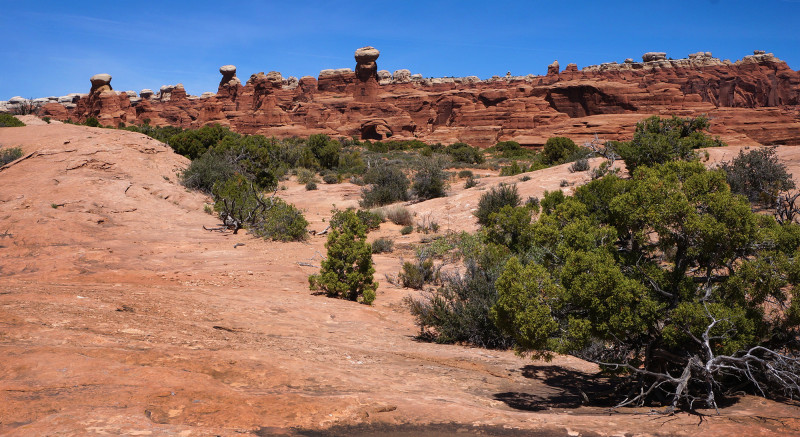 Hikers eager to get to the official Hayduke can head south along the road, but it would be a shame to miss out on the much more scenic route up under Tower Arch and then through the heart of Klondike Bluffs. Those continuing on the slightly longer but more fun route will soon be at the 4×4 parking area and then on to the foot path leading into the fins. 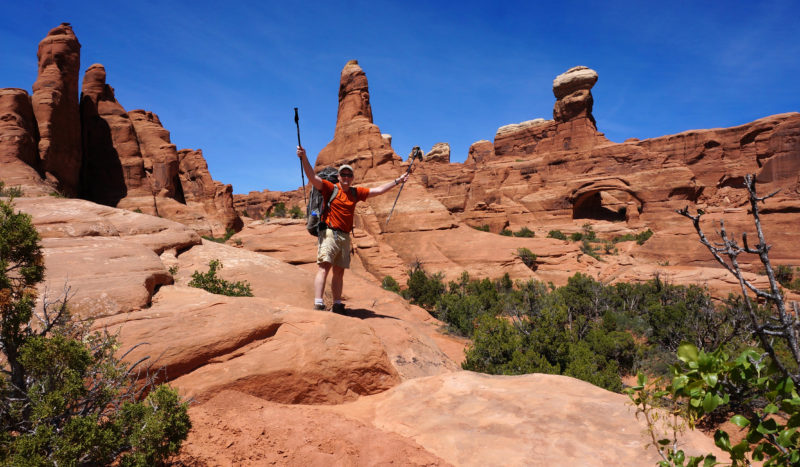 After a minor bit of scrambling, one arrives at Tower Arch. 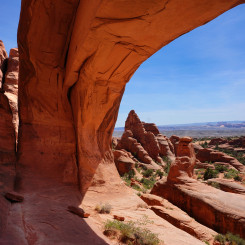 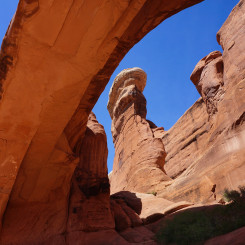 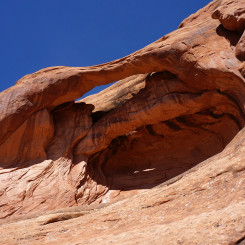 As you leave Tower Arch, make sure to notice Parallel Arch up high on the wall just to the south. It’s here that instead of following the trail back to the 4×4 parking area, continue south through the wall of fins along the trail that leads to the standard vehicle parking area in Salt Valley. Once through the fin corridor, one will see the Marching Men and the La Sals to the south. 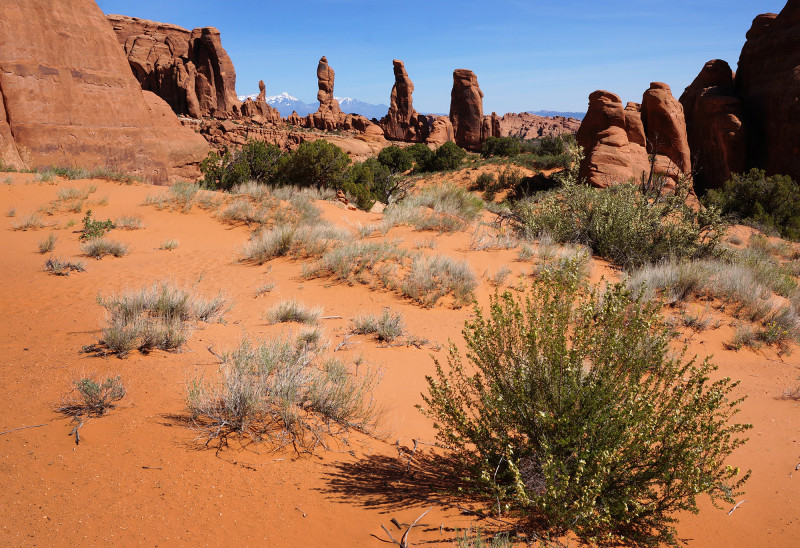 After the official Tower Arch route drops down into a wash to head east, instead one should turn south and continue walking down the wash keeping the Marching Men on your left. You will pass some interesting hoodoos along the way. 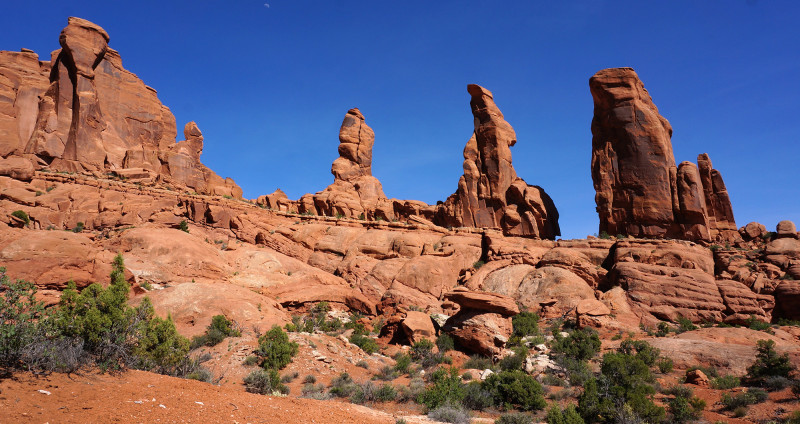 Soon it will be possible to exit the wash and wind around the southern side of the Marching Men. From here, follow the sandstone on the eastern side of another outcrop of rocks before heading down into another sandy wash.

Once past the wash, head ESE though the sand and soon you should intersect the Tower Arch Jeep road again. Follow the road just a short ways up to the NE and soon you should be at the intersection with another Jeep road heading southeast down the valley. Head down this road and you are officially on the Hayduke Trail having only missed the initial 4+ miles of road walking from the park boundary to the north. 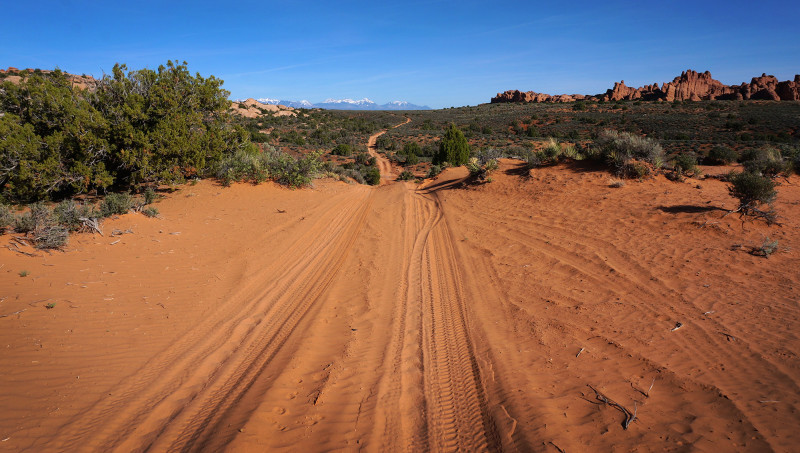 the official Hayduke along  the sandy road headed south in Arches

Klondike Bluffs and Tower Arch Alternate from the Official TH

As mentioned earlier, if heading out from the official start spot, it’s still possible to incorporate a short alternate through the Klondike Bluffs with an excursion to Tower Arch to add a bit of excitement to the beginning of your Hayduke Hike.

Shortly after beginning down the Salt Valley Road, one should head to the parking area for the Tower Arch trailhead. FYI — there’s a pit toilet there as well. One can get there by turning right on the the road which is about 50 yards before where the Hayduke turns on to the Jeep Road to Tower Arch. However, one will save some mileage by cutting cross-country long before that point — maybe a mile along the Salt Valley Road from the start. If coming from Devils Garden definitely just take the road (see map).

Once on the trail follow it accordingly to Tower Arch. Then backtrack through the fins and head around the southern side of the Marching Men to connect with the Jeep road and back to he official Hayduke. See the above description for more detail connecting from Tower Arch back to the official route. 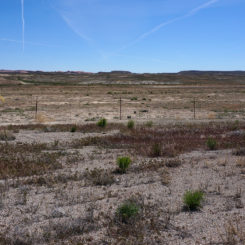 following the rails toward Klondike Bluffs 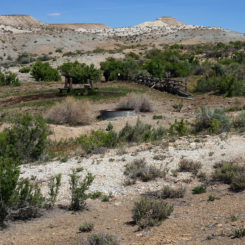 looking back to airport 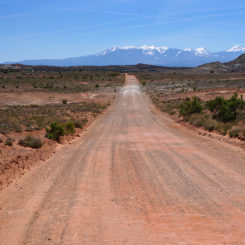 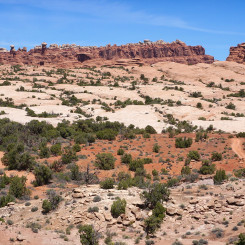 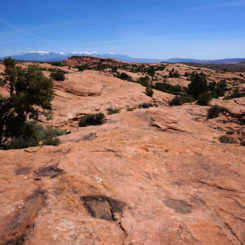 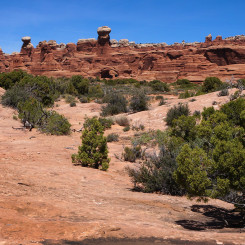 into the fins on Tower Arch trail 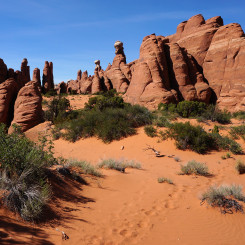 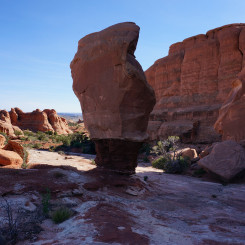 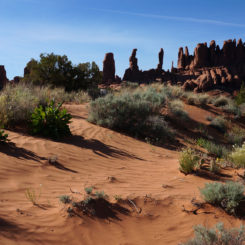 south of the Marching Men