On each of my long hikes, I usually rent a satellite phone so that I can send updates from the trail and get messages back. This communication is nice, but in reality the device also serves as an insurance policy in case something were to go awry in a really remote location. The SAT phones I’ve used before usually range from $200-$300 for a month including my usage which is primarily message based. Since I don’t use the VOICE capability much, I started looking into cheaper message-only options which are coming to market as technology advances.

After a lot of discussion on the topic with other outdoor enthusiasts at BackcountryPost.com (see the discussion here), I decided to try out a new device — the Cerberlink Satellite Communicator. I posted my review to that group after the hike, but I thought I should share it here as well.

Just a quick summary, The Cerberlink Sat Communicator is a device which has an internal GPS and connects to a satellite system to send your coordinates and generic messages (“I’m OK” or “Send Help!”) to pre-defined contacts. It also acts as a SOS beacon when in an emergency situation (minus the local distress radio.) When you pair the device with a smart phone, you can then send custom messages as well as receive messages via email or SMS.

I hadn’t given this device too much consideration when it debuted because of its high price ($500). But, neither of its competitors, the inReach and the SPOT, seemed ideal for me — and they were not cheap either ($150-$250.) The upfront costs aren’t crazy, but what makes all of these devices expensive is that one has to have a “plan” much like a cell phone. This can easily add another couple of hundred dollars per year (or much more!) For someone who only uses such a device 1-2 months a year, this didn’t make sense.

But, then I realized there was a reasonable rental option for the Cerberlink direct from the company (about $100 for a month with 40 messages.) See the latest plan details here. This made sense for me so I took the plunge and tried it out.

THE NAME — Ok, not really a feature, but I hate it. If you are a fan of mythology or 3-headed dogs you may feel differently, but it bugged me every time I had to refer to it. I’m also not a fan of the branded names for each part of the ‘system’ — Cerberus (the whole package), Cerberlink (the device), Cerbertouch (the app), Cerbercenter (the site). When all is said and done, I realize this doesn’t matter, but I just thought I would post my thoughts.

THE DEVICE — I got the orange model and was pleased to see the construction was solid, yet not too big. At 186g it’s about the same size of the SPOT2. The buttons were solid and the indicator lights were bright and easy to see even in full daylight.

SIGNAL — awesome. The device would usually lock on to the GPS within about 15 seconds and then connect with the SAT when requested in about 5-15 seconds. The device would even lock-in and connect from inside my tent with the fly on. Only one time was it not able to connect, and that was when I was near the bottom of Happy Canyon with only a partial view of the sky. The accuracy of the GPS was dead-on every time. NOTE — when sending a custom message via a phone, the device doesn’t require a GPS signal and instead may estimate position. This led to a slight confusion once when the accuracy of the estimate was about 20 miles off.

BATTERY — awesome. I went all 18 days w/o a re-charge. For the most-part though, I did NOT use the tracking feature which would have sucked additional power. If needed, the device charges its LiON battery via mini-USB which I like. At the halfway point of my trip, I had only used 14% of the battery. My only complaint is… there is no way to know how much battery life is remaining via the device itself. You must pair the device and launch the app to see the remaining battery life. Boo.

ON-DEVICE FEATURES — Good. This was a concern with the SPOT Messenger, in that the actual device didn’t offer much in the way of stand-alone features. I was happy that he Cerberlink allowed me to send the generic “OK” message as well as drop “breadcrumbs” or check the server for custom messages. The SOS alert was also available w/o pairing with my phone. 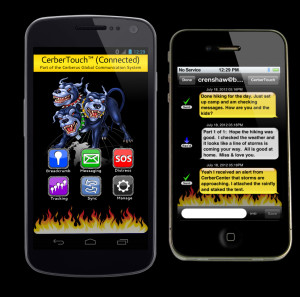 THE APP — Ok, but not great. Overall the app got the job done, but there were certain aspects that seemed a little clunky. The messages were done with a small gray font on a black background which made it tough to read. I never did find a way to zoom or customize this. The way the msgs were threaded was awkward with no options to manage folders. One time a ‘bad’ message got into my inbox and every attempt to retrieve would crash the entire app. I thought the device was useless at this point as I couldn’t send/receive any new msgs after it happened. But then found a “delete all un-retrieved messages” option which fixed everything. So, not perfect, but the app was fine and it was great to have 2-way communication.

Pairing the device was simple. It remained paired the whole time until my phone’s battery got depleted. When re-charged I had to re-pair. This could have been a critical error as to re-pair I needed my unique user ID assigned by the company. Luckily… I had this on my phone in my inbox. Later, I was unable to retrieve this ID (problem with my phone) and from that point on (near end of trip) I was locked out of the app — which really sucked. This leads me to my biggest complaint of the system and one not directly the fault of Cerberus… but the dependency on a second device is less than ideal. On my trip I had major problems with my phone (battery issues) and thus I couldn’t use many of the advanced features of the Cerberus.

The app also allowed for some advanced synch features. One would let you synch messages to the device, but not connect to the SAT. This way you could write a bunch, then synch when at a better location. You could also set the device to grab GPS breadcrumbs at regular intervals from 10 minutes to 3 hrs. Separately one can set the “upload” interval. Thus, it could track you every 10 minutes, but then upload all the breadcrumbs at once say every 3 hrs. I liked this idea, but I turned this feature off to conserve battery power and to better control my waypoints.

It was simple to post to Facebook/Twitter with the app. The app would also check to see if a data connection was available and if so would allow you to send messages for free.

Also — it’s worth noting that the messages are 160 characters which is so much better than the 41 character limit with the SPOT Connect. However, it irked me that frequently incoming messages had all kinds of headers/junk data affixed to the core message which led to me getting charged for an extra message nearly every time.

THE SITE/CUSTOMER SERVICE — the site is fairly good with quite a bit of useful information. The team was very helpful and prompt with my order and I love that they got it out right away and charged a low near-cost price for 3-day shipping including a return label. The site lets users to create a public map so that people could follow along. This worked well, but the map was so tiny that it was almost pointless. See the end result here:

OVERALL — My final thought… is that I was very happy with the Cerberus. With all my phone problems aside, the actual Cerberlink unit acted flawlessly and I would definitely trust it as a 2-way lifeline to the outside world. Without hesitation I will consider using it again as a rental for an extended trip. If looking to make an actual purchase for a device I could keep and use once a month or so… I might still have reservations. This isn’t because of the performance, but just because of the steep price and the promise of something better possibly coming out at any point. So… calculate the value for your own situation as necessary.